As already suggested, I would not torque any of the spring bolts down until you have the full weight on them, not even the fixed mount locations. Also, I would leave the shackle mounts fairly loose and drive around for a while until the Jeep figures out where it wants to sit. Also, you may consider using lock nuts on all the spring components instead of standard nuts and locktite. Once you get them torqued down to the right spec, the won't back off. And especially with the shackle mounts as the torque will be fairly low there, 25 ft. lbs. or so. I apologize I am coming into this one late, but are you using rubber or poly bushings in the springs and shackles? If rubber, there really isn't a need for the grease, but if poly, there is of course. You probably already know this, but once again coming late to the party and noticed all the zerks and what looks like rubber bushings. You can grease them, but they are designed to run dry.

Progress looking good though. Although she looks to be tracking a little too far to the driver's side . And I will give a firm amen to having to drill on some old rusted bolts. Have had my fair share with both the CJ and the FSJ. Patience and good cutting oil usually gets me through....and couple extra beers.

The bushings are poly, hence the greasable shackles. I was just using what nuts that came in the kits. It's weird what they throw in there. Some are regular nuts, and some are nylok nuts.I may go buy some more of the nylok so they're all the same. Everything is just hand tight right now. I ended up loosening them up to get the axles mounted. Thankfully I thought of it before I started... That offtracking is just the camera angle. Here is a front view, and in this shot the phone is off center just enough to make it look like it's tracking to the passenger side a bit. The spring pads lined up perfectly, and the axle fell right into place. The measurements going from sidewall to frame are nearly identical side to side. 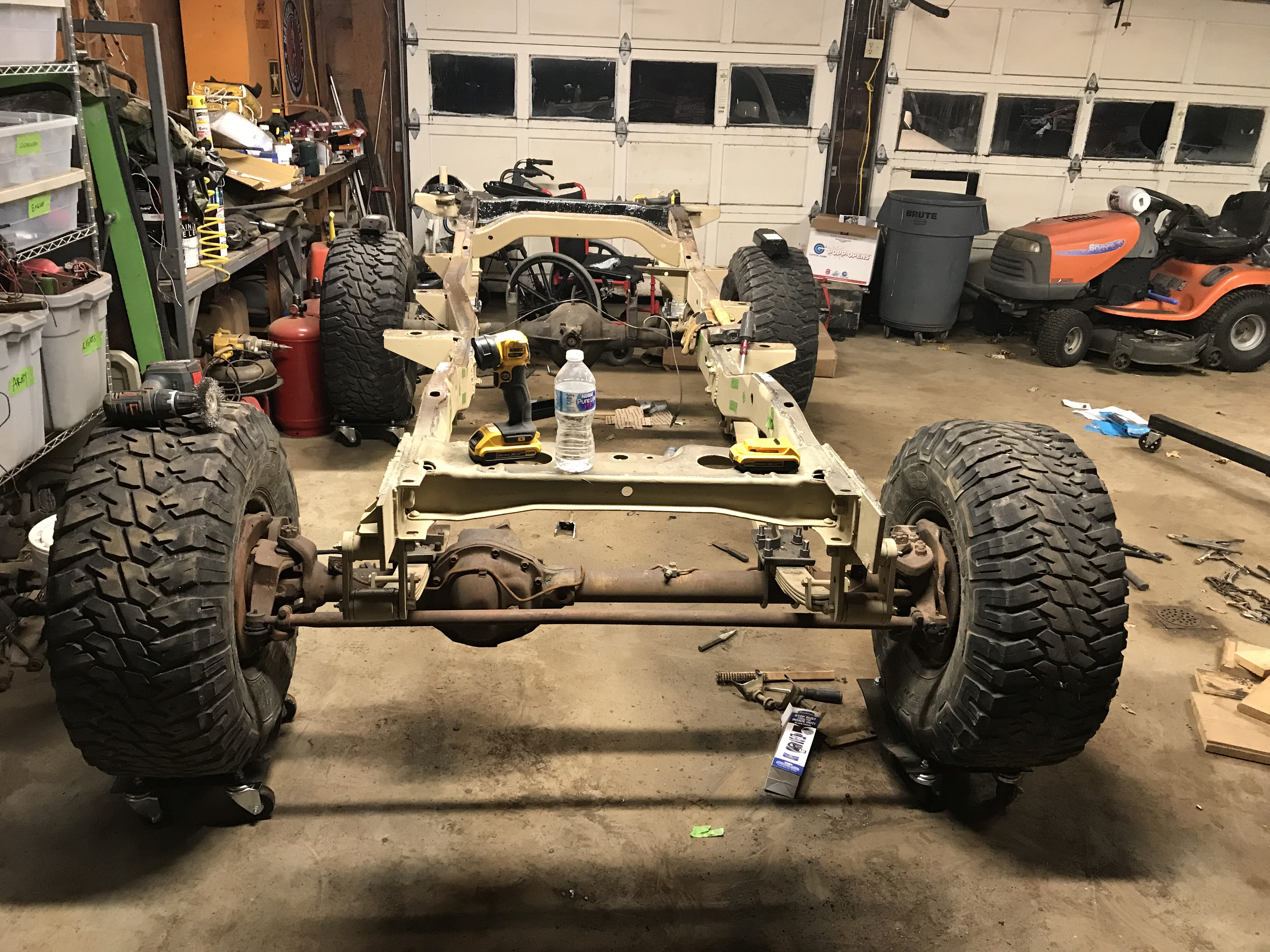 Seeing as how I'm getting ready to get the shock towers welded on the frame, and the tabs on the axles, I figured I'd go ahead, and get the motor mounts, and trans mount on as well. 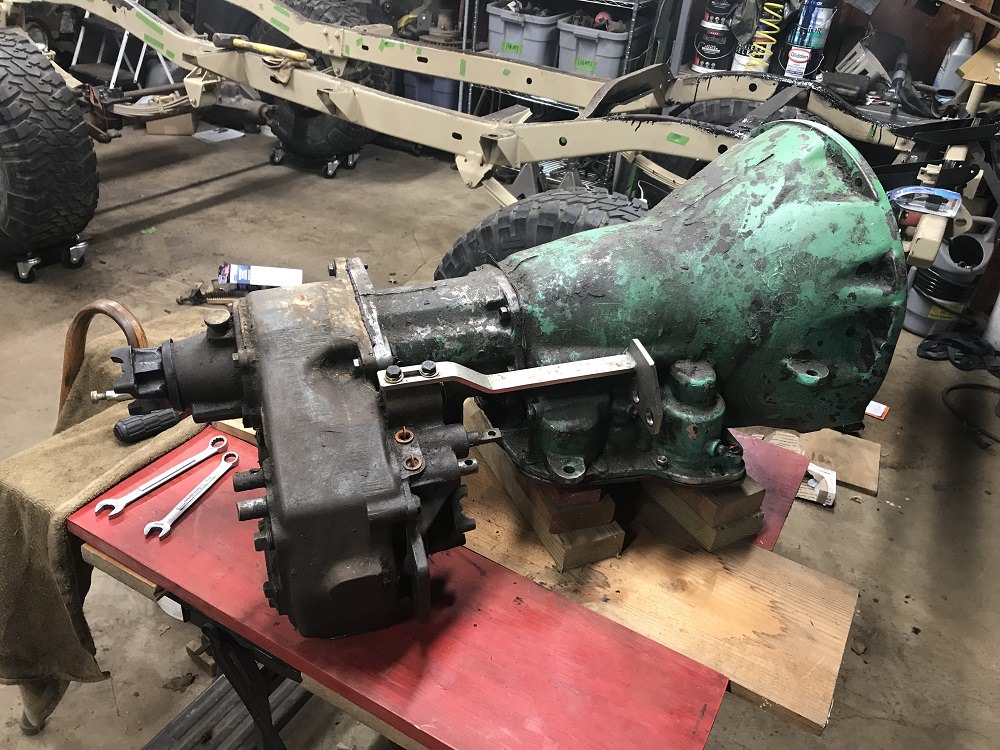 Finances continue to be a stumbling block, and I have decided to forego the idea of swapping to the Dana 300. The Dana 20 was working when I pulled it, I'll just keep using it, and save the expense of having to buy new output shafts, and adapters... Either way, I want to get both the trans and T-case gone through to make sure everything is 100%. Just because I was driving the CJ5 before I tore it down, doesn't mean I won't put these same components in the CJ7, only to have them go south in 6 months...

Upon closer inspection, I noticed that there are signs of abuse... Somebody has been beating on the shift rails. 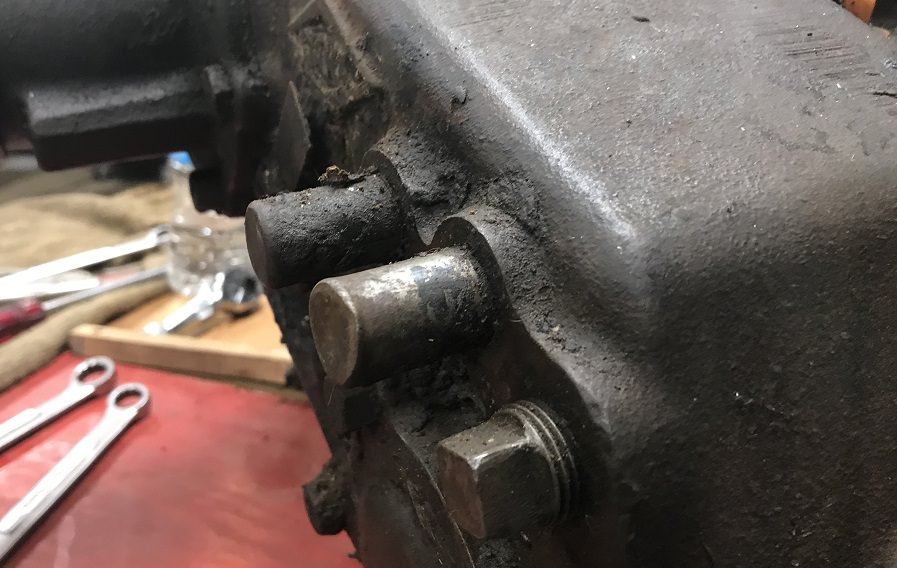 Then I remember even though it did work, it was difficult to shift at times. It had a twin stick cable shifter (supposedly newly installed) but I never could get it to work independently. Just regular 4 high, or 4 low. Something for the trans guy to check on. I'll be dropping it off Tuesday, along with a spare Dana 20 that came with the CJ5 back when I first got it. The "spare" has a broken rear output shaft, but most of the other parts should be good, including the shift rails. 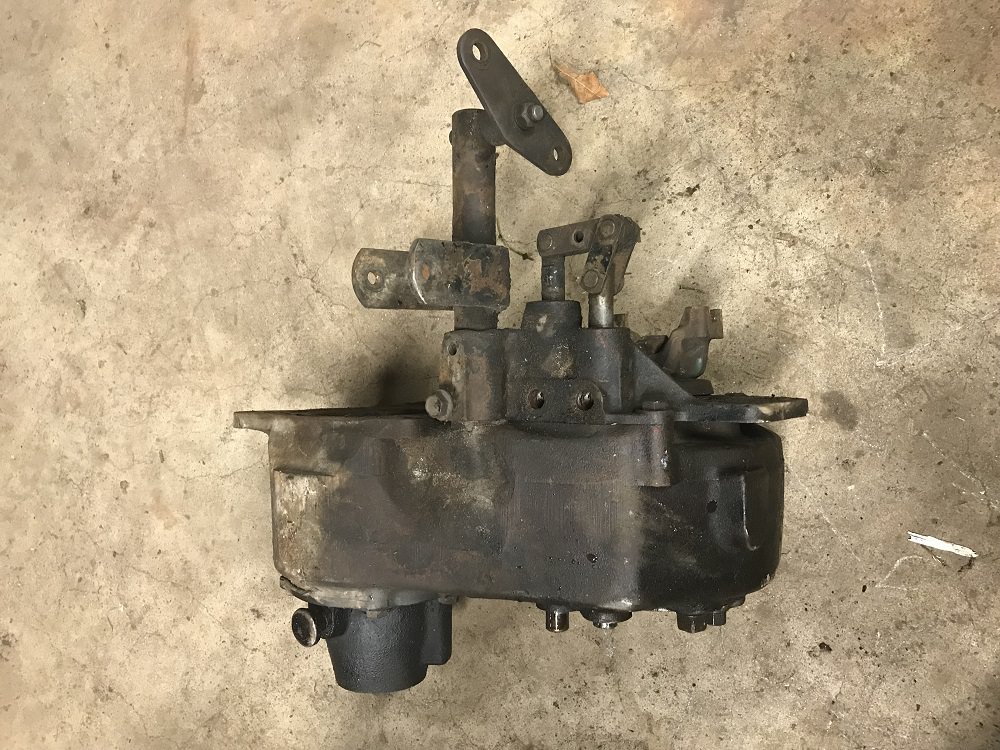 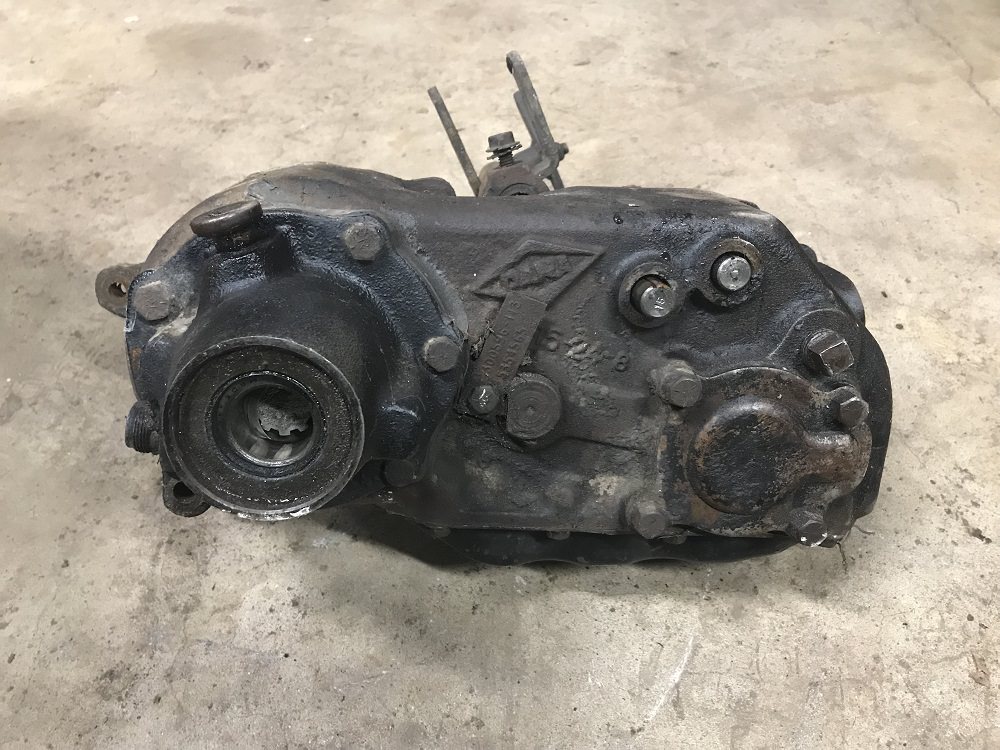 I'm going to try to have a transmission mount fabbed up using the stock skidplate as the base, but if need be I can have a new crossmember built. The one it was mounted with in the CJ5 had to be cut out. I was a huge piece, welded in, hung real low, and the engine & trans were both mounted solid, with no rubber mounts. Not how I want it done.

Once I get these back I can get the welder over here. That should be all the welding I'll need til it's time for the cage.


But of course something will come up...

Transmission, and 2 Dana 20s off to the trans guy. Hopefully he won't take too long to freshen them up, and they can get put in their new home... He said he was busy as hell, but I'm not too worried. Wife already reminded me that Christmas is coming, so I probably won't get much (if any) money this month for Jeep parts... or gun parts... or ammo... or anything cool. 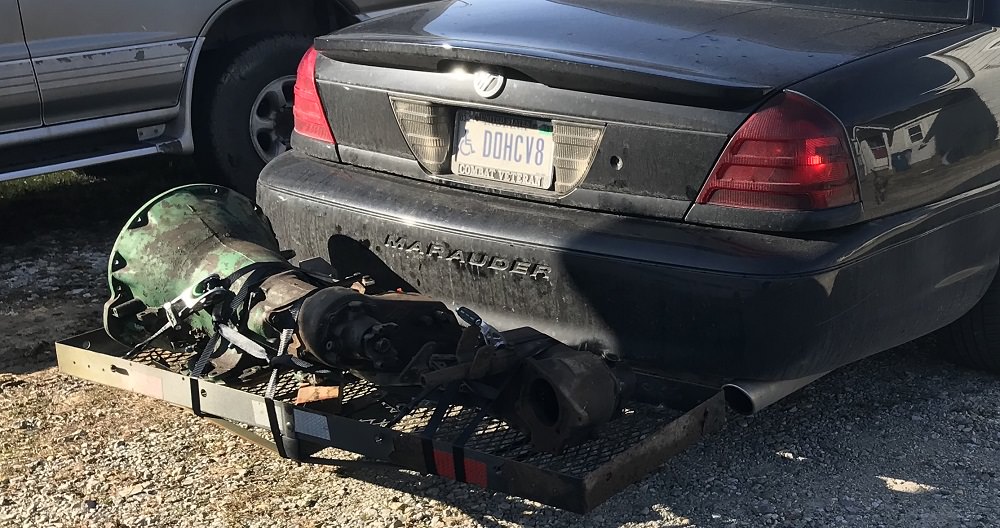 I forgot to take in the converter when I dropped off the trans, and t-cases, but I can drop it off next time I'm down in Lafayette. I may just spring for a new converter anyhow since that's what you normally do when you get a rebuild...

Anyway, I went out to see if I could get the mount off the old trans. I had a thought that with the 999, and 727 being from the same family, I just might be able to use the same mount that came on the Jeep originally. I'll take it with me next time I go, and see if the holes line up. The gunk on it was in places a good 1/4 inch thick. I had to scrape it off with a putty knife before taking a brush, and rag to it. 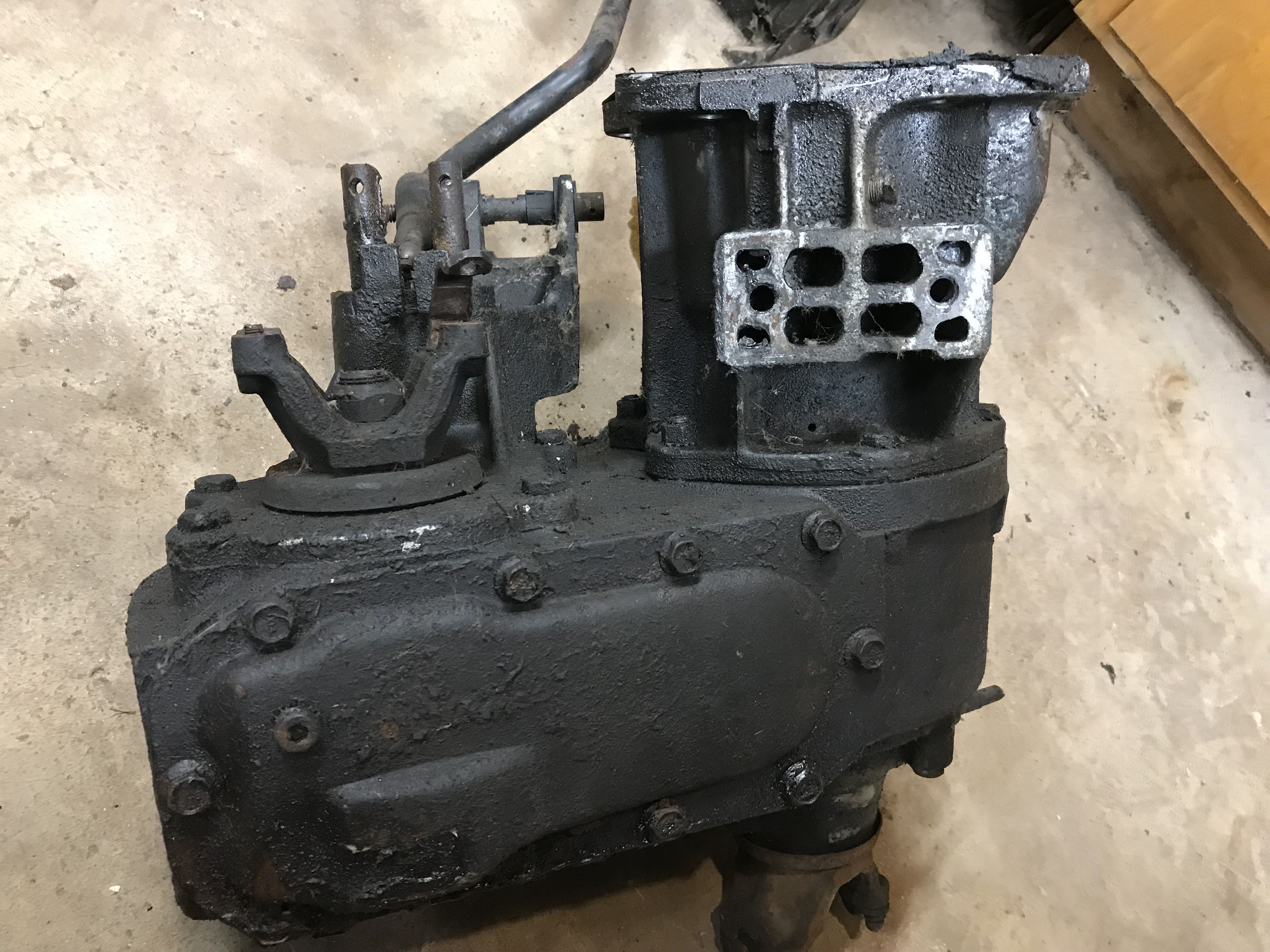 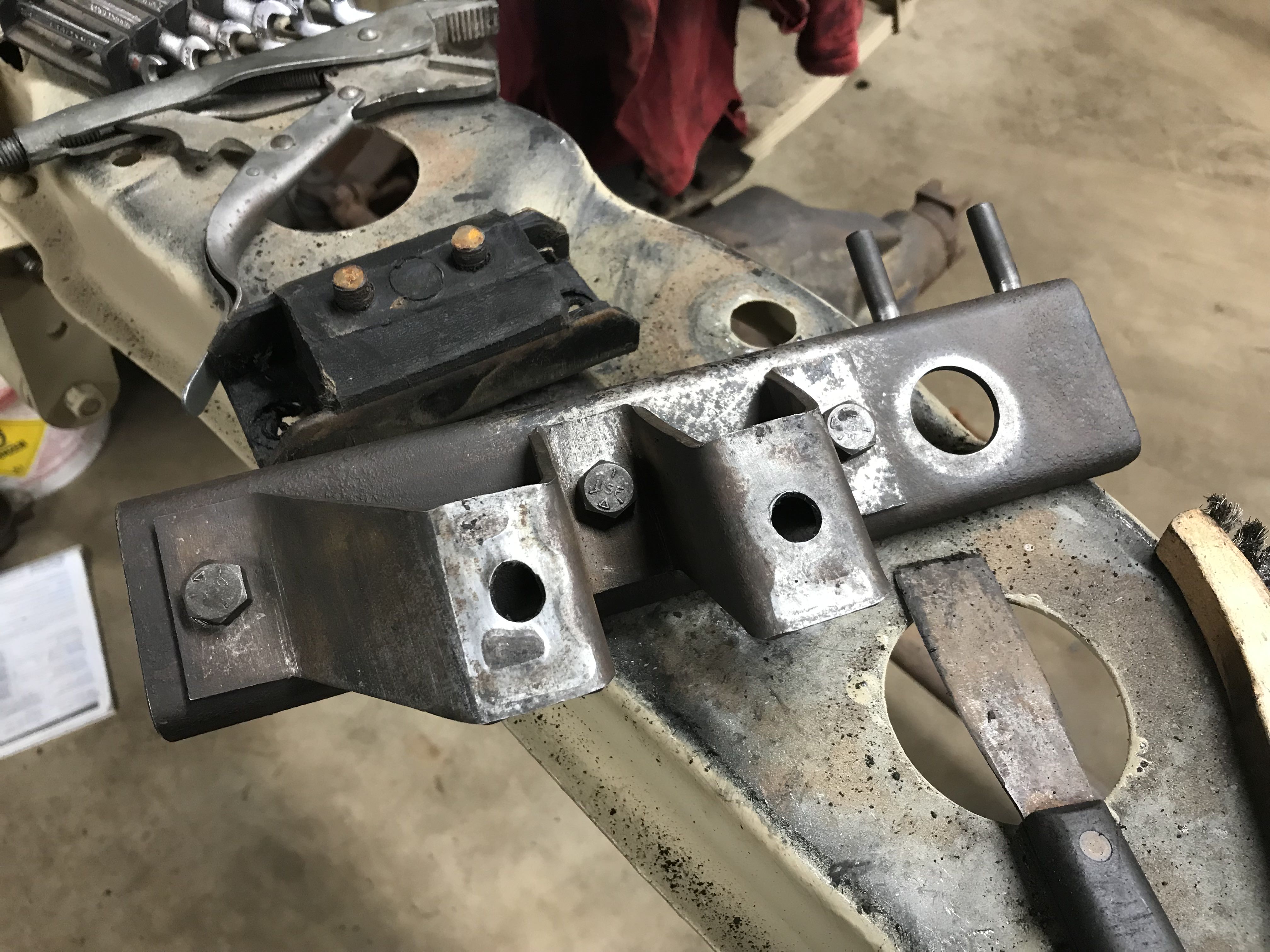 Then I decided to test fit the tub. I don't have any new parts that bolt on easily (nor money to buy any) at the moment. I have to wait to get the trans back, so I can have the motor mounts, and shock towers welded in place. I discovered two things.

1. Just setting it on the frame is a great motivator. 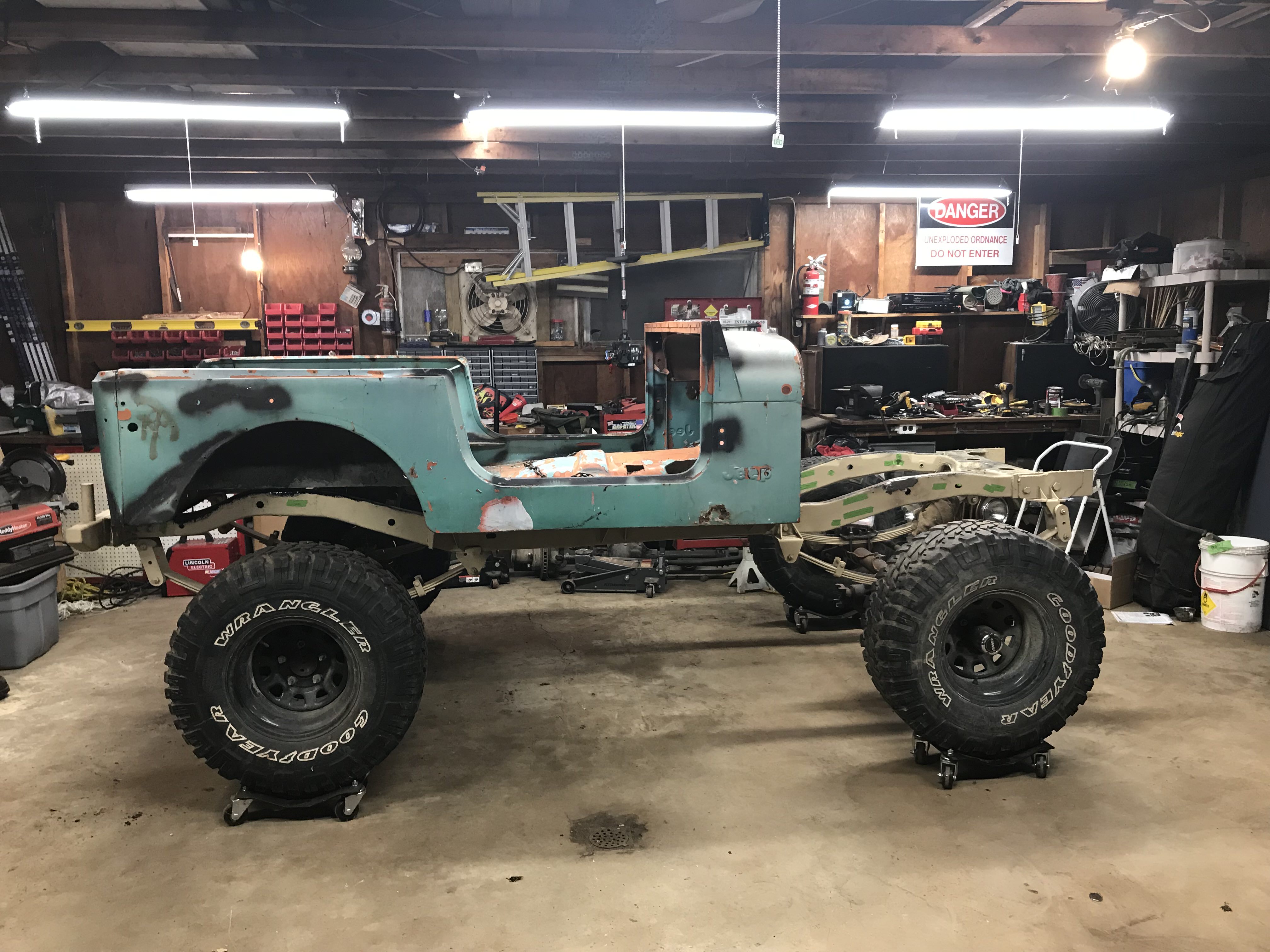 2. I won't be placing the rear towers forward leaning, like from the factory. 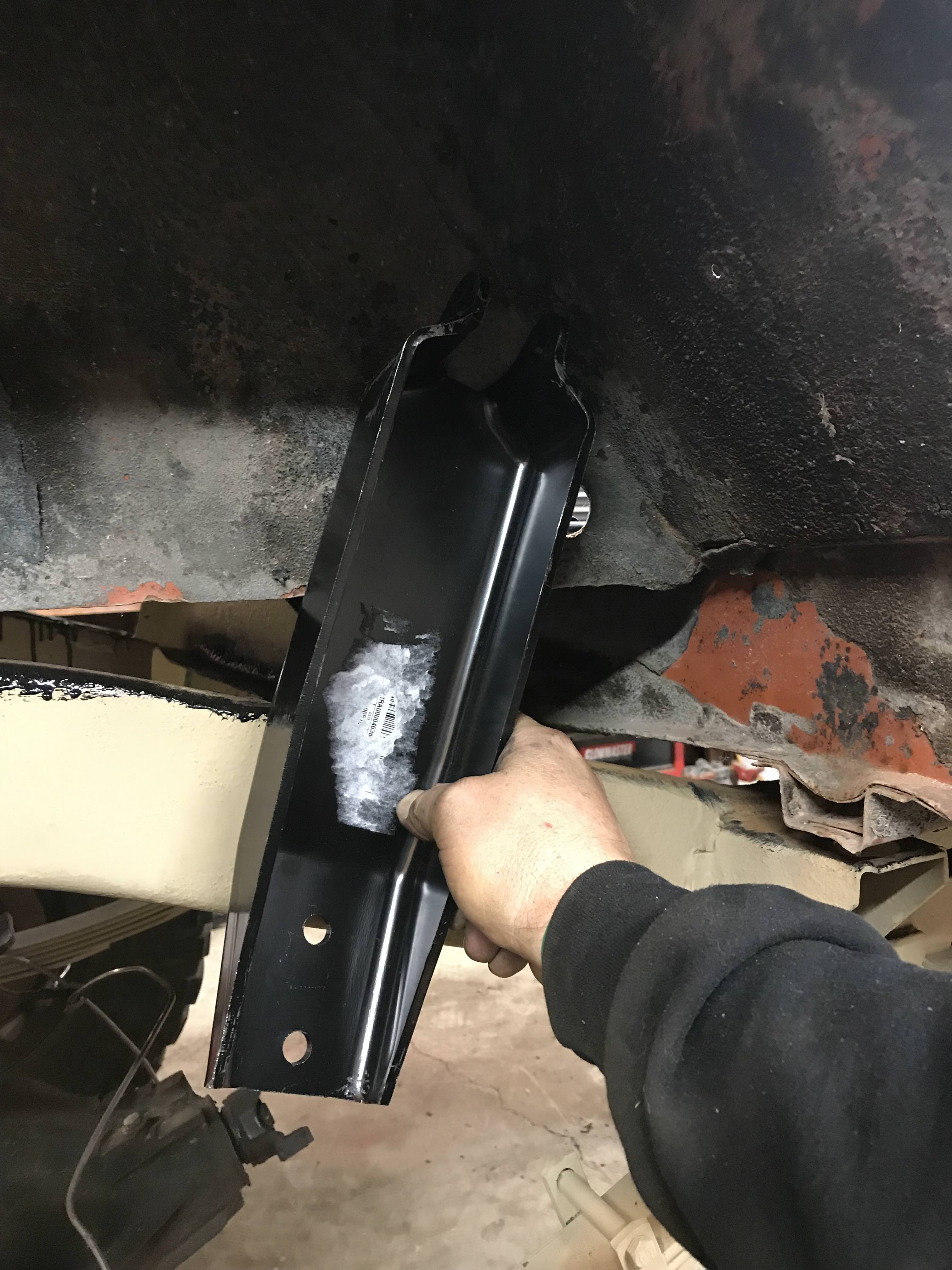 There isn't enough room without getting into the fenderwell. If I go straight up, I've plenty of room. The wide full size axles give me the room I need outside the frame rails. 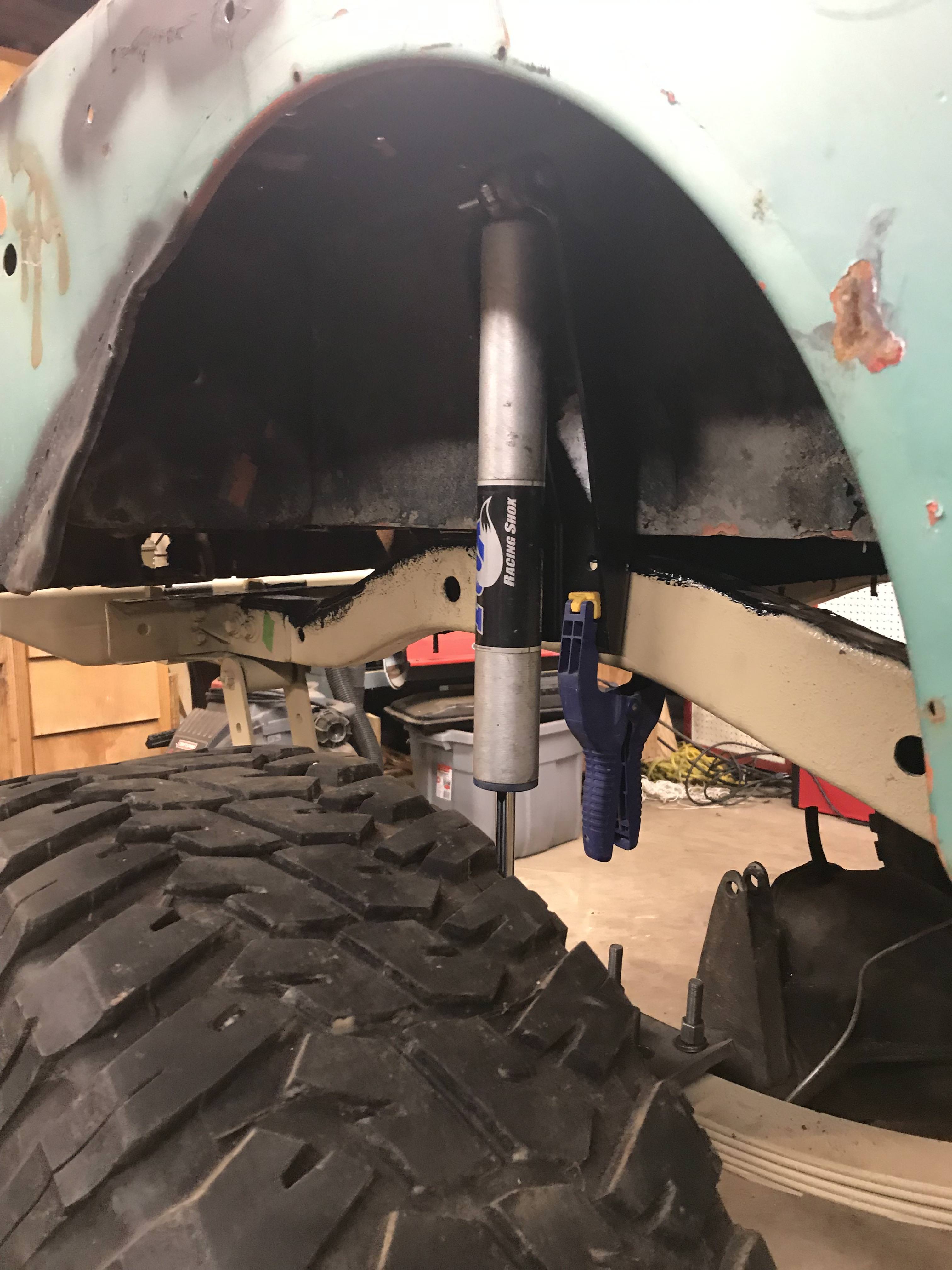 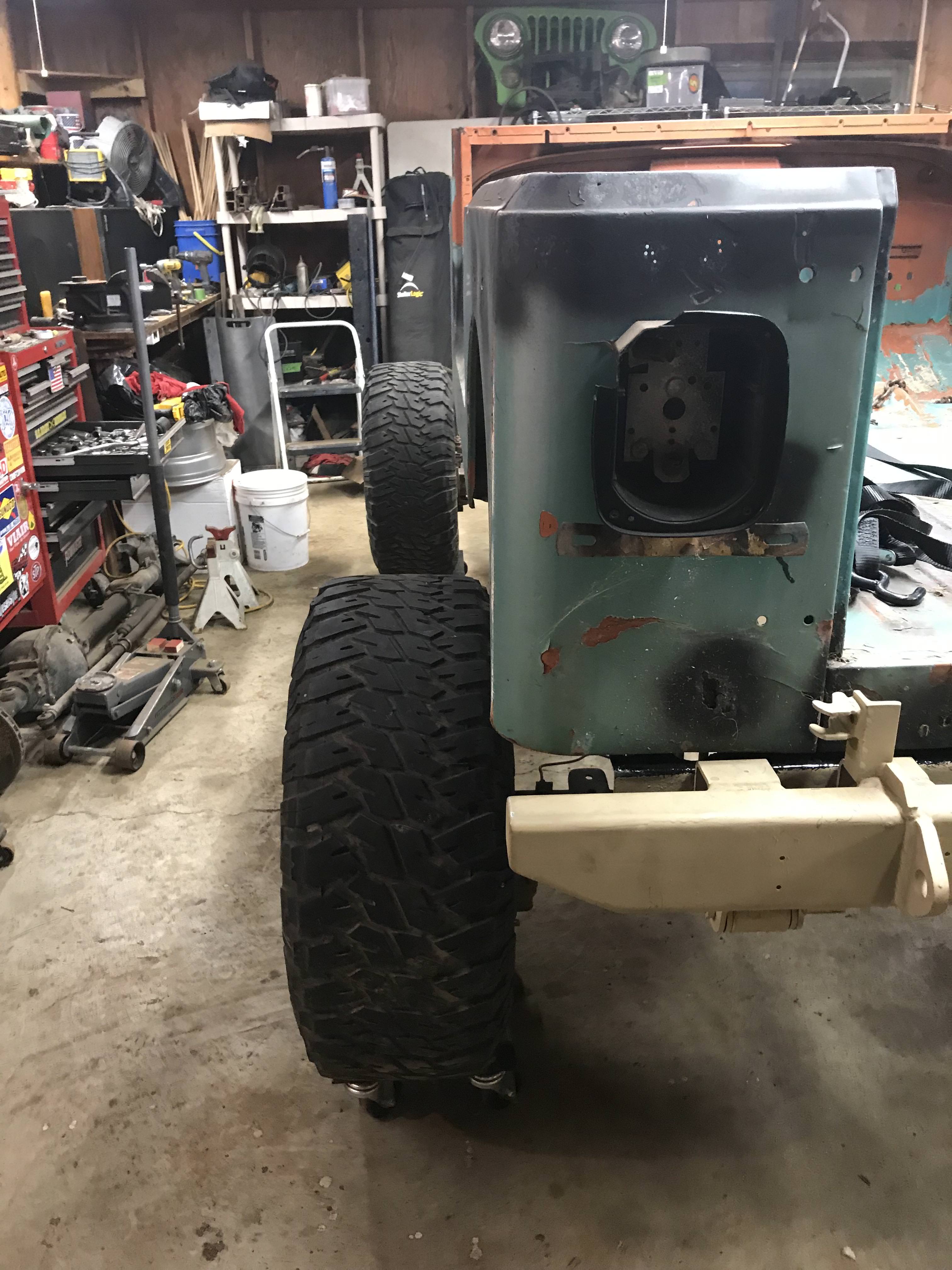 With the wife taking most of our money for Christmas, I decided to do some more test fitting, and planning. Stuff that doesn't require new parts. I put one of the front fenders on to check how centered the front axle is. Not bad, plus still no weight on it... I think I will spring for new ones though. the rust damage on the sides is pretty bad. 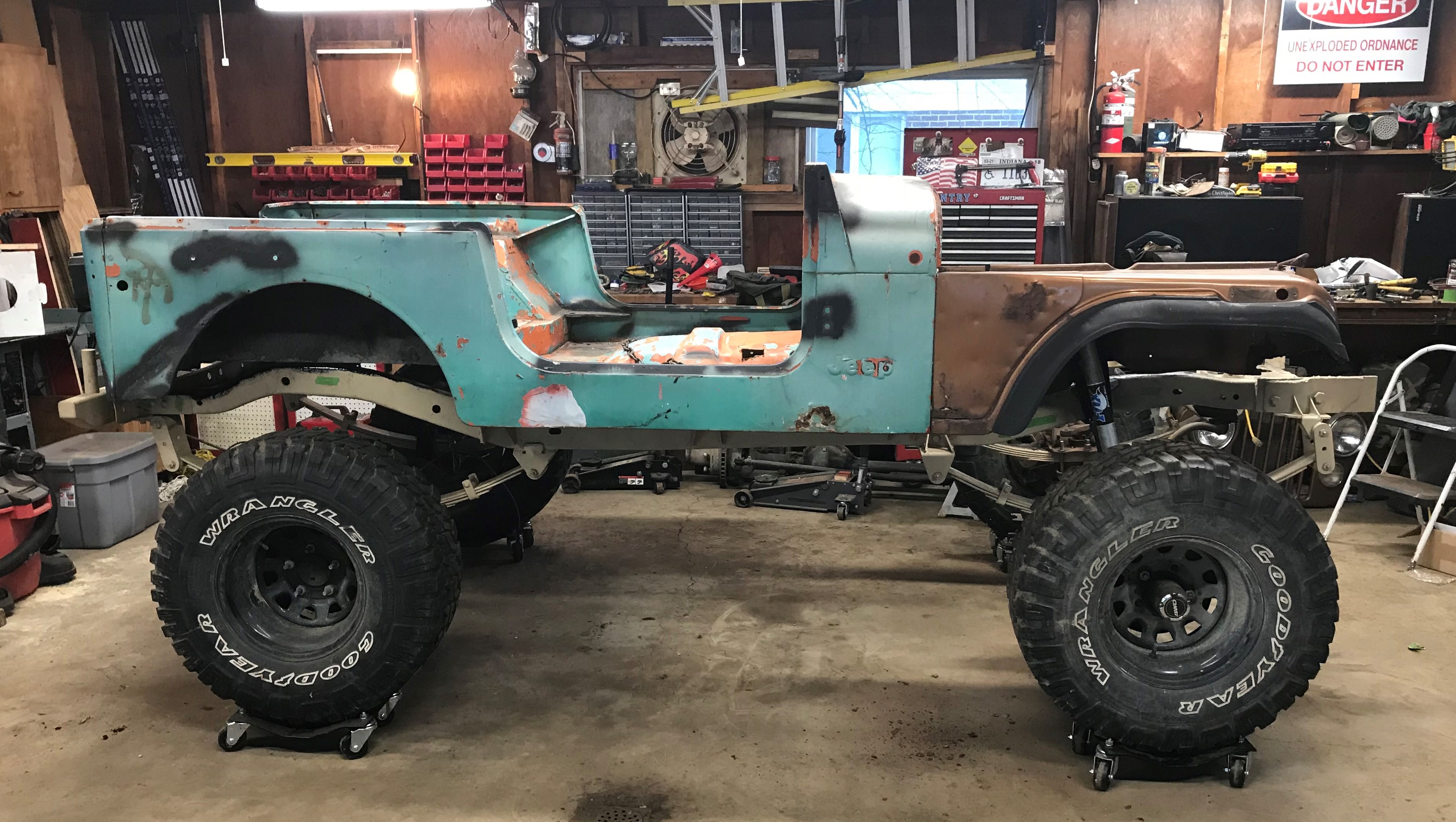 I noticed a bulge in the inner fender right where the shocks went, and there is room in the pocket for the Super Duty shock towers to go in the stock position. In fact, they have to to avoid inner fender mods. 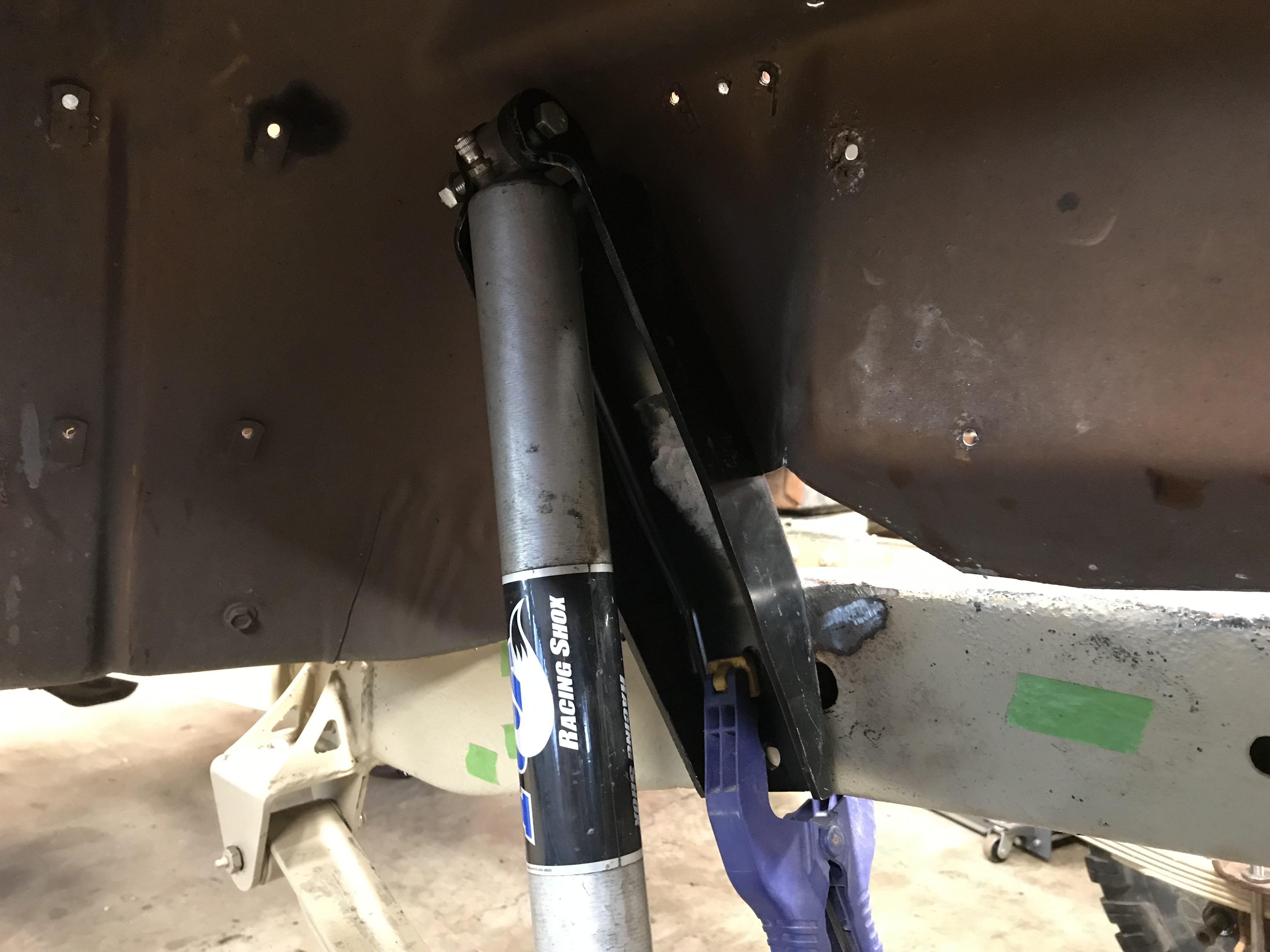 I lined up the shock with my new tabs, and noticed something. The spring plates have a nice mount where the stock shocks went. I bolted up the sway bar to see where it lined up. It's inline, but pointing the wrong direction. 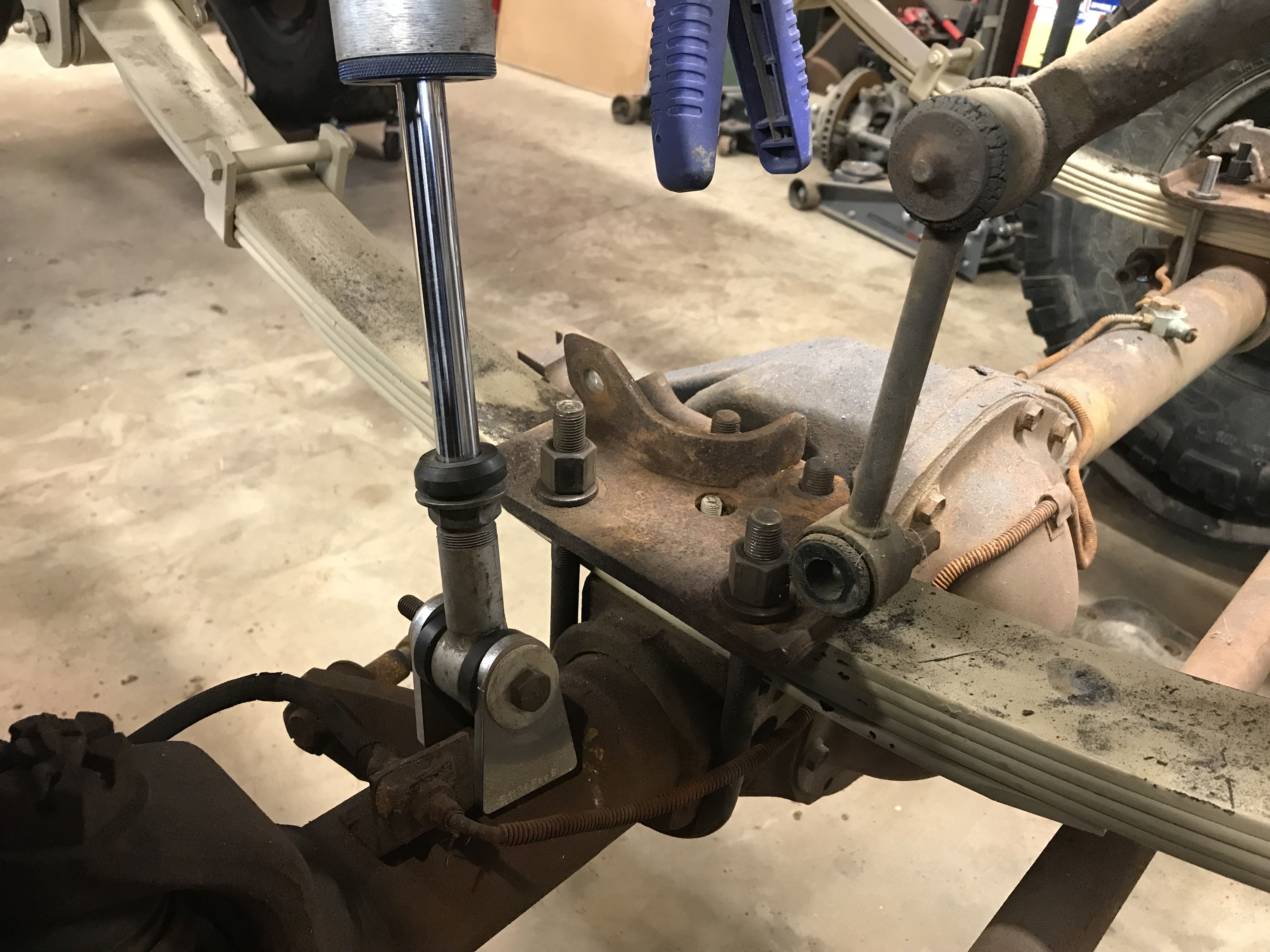 I went to the other side and flipped the plate around. Bingo. I can use the factory sway bar. I'll get longer, adjustable, quick disconnect links to make the fit right, and allow for better trail riding. I can't flip the other side because of the way it bolts to the pumpkin. I'll get that mount cut off the plate, and welded back on pointing the other way. 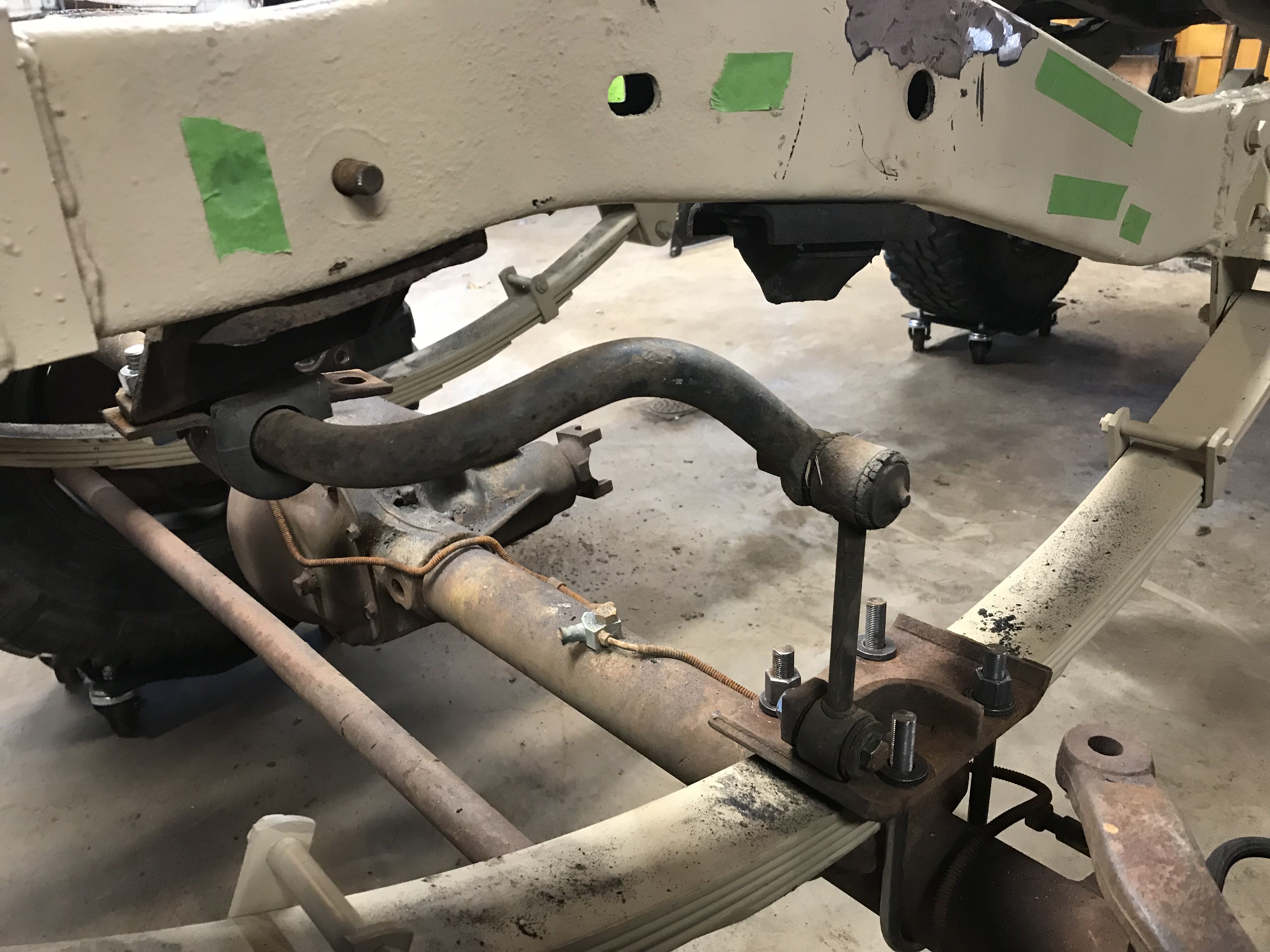 I can also keep the stock bump stops, if they have something to hit. I got the spring plates from the CJ5 the drivetrain came out of. If I hog out the holes a bit, and cut one of them in half, I'll have two nice bump stop plates. Rather than bump right off the axles, now they will bump off these plates. It should be just high enough to make up for the difference in tires. I'll be running 35s. Recycle baby... 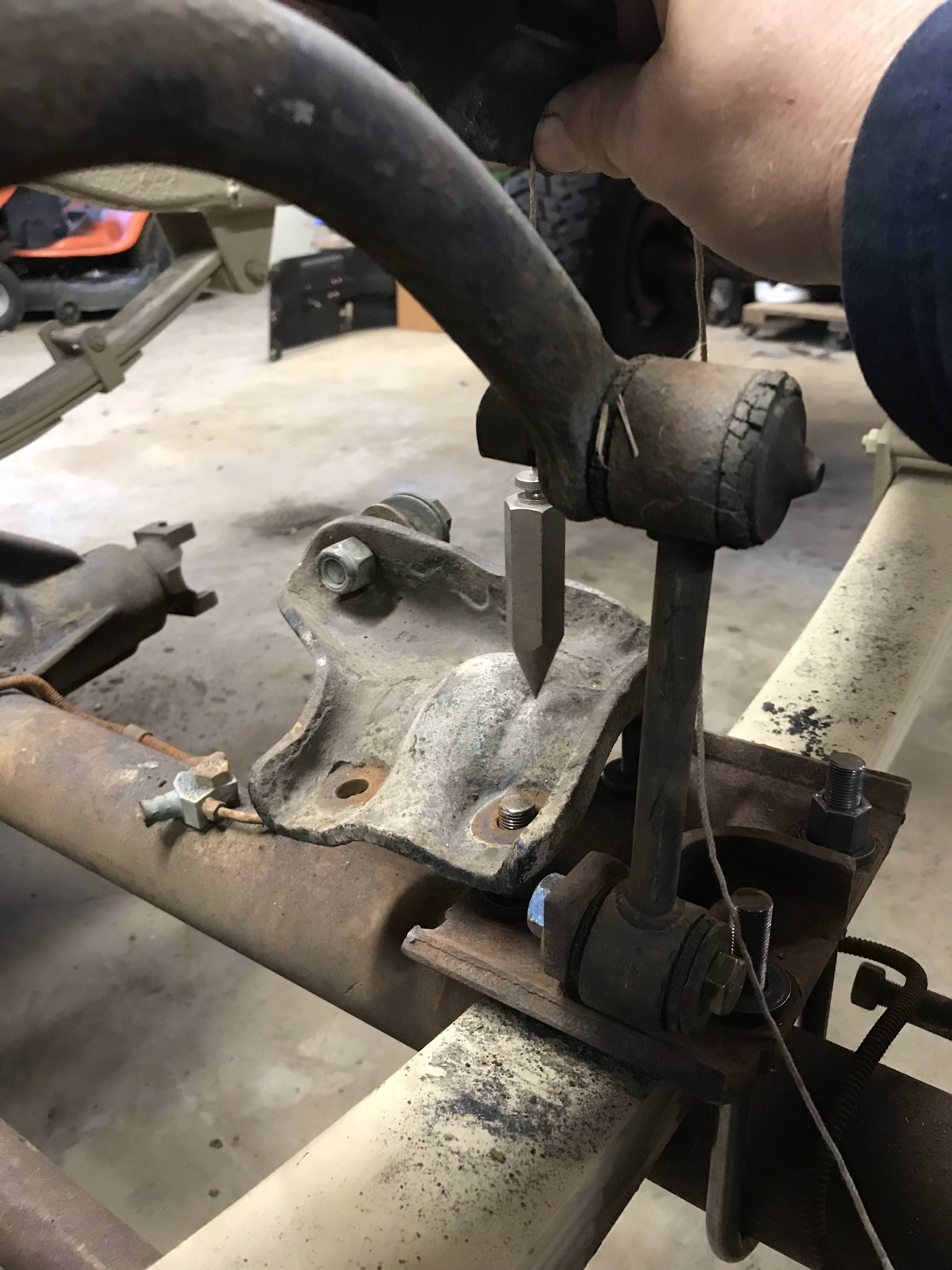 I dropped off the front right spring plate at the welder to have him cut off and turn around that shock bracket, that will now be my sway bar link mount.

I also dropped off the fuel tank at another shop (they have a huge brake) to have a skidplate bent up to match.

When I got home it was just too nice a day not to spend some time on the Jeep, so I headed for the garage to tinker for a bit. I found some stuff out. The fenders on both the green CJ5, and the brown CJ7 were all rusty. 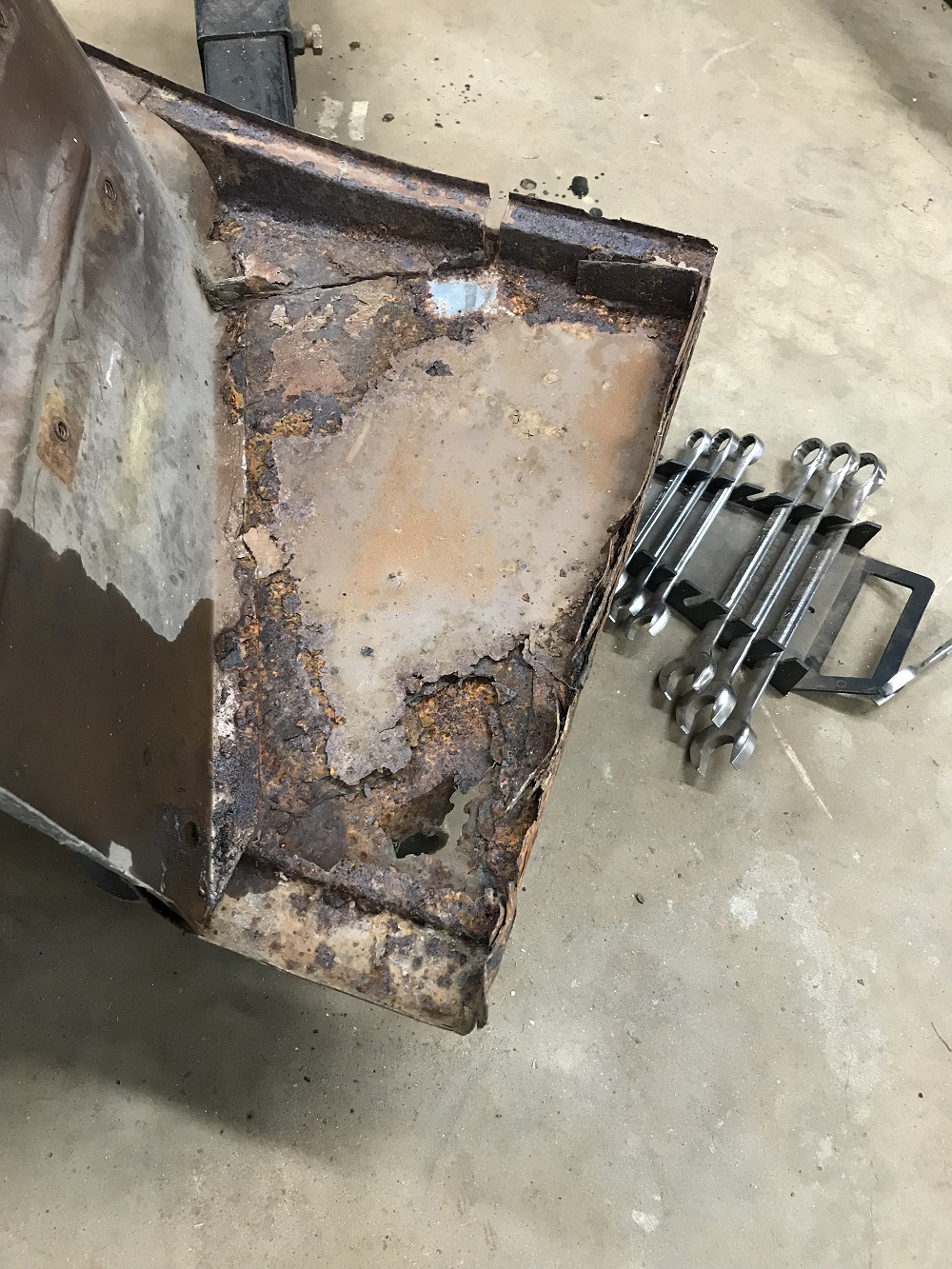 I was hoping to save them since the rust is all in the same spot on all four... the flat side piece. However, I happened on a almost new set for sale on facebook the other day. I had to drive 2 hrs to get them, but I got both for $150. Not a dent or scratch on them. Of course I had to test fit them. 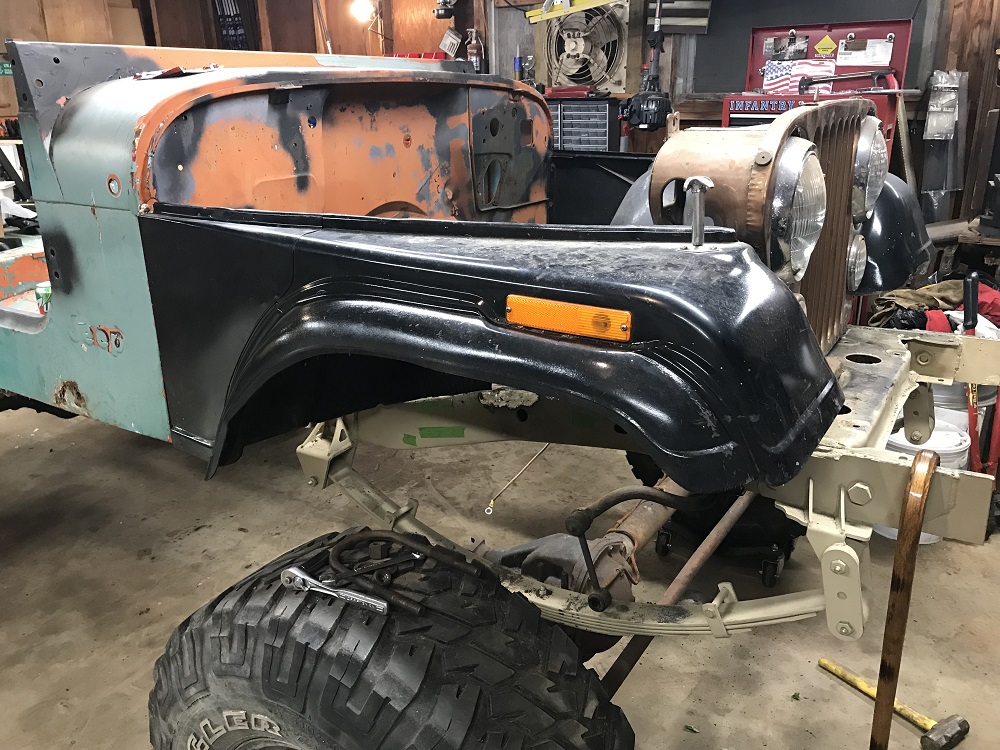 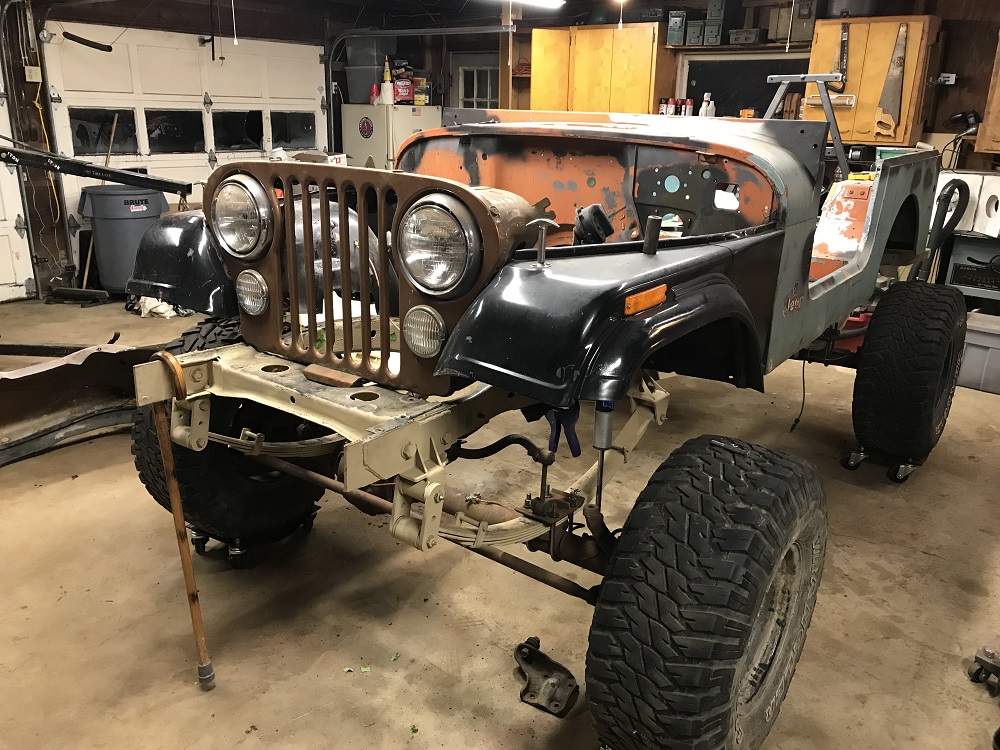 This is when I fount out that my replacement tub (a 1976) is a bit different. There is no place to mount the top fender brace. I'll have to drill a hole for a bolt when the time comes. 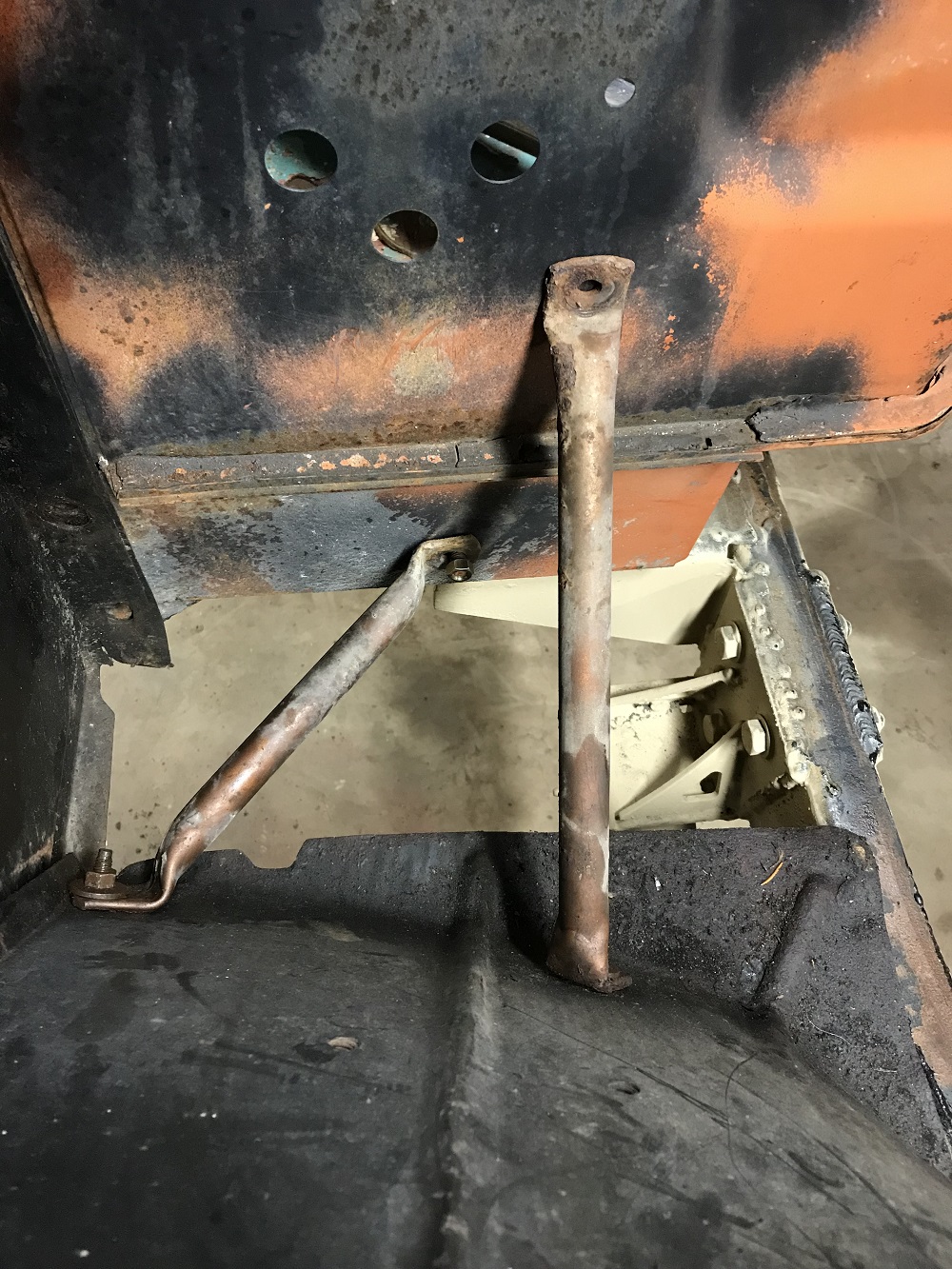 Next I decided to open the box to the tire carrier that goes on the bumper. Sadly I couldn't put it on the spindle. Apparently they sized the bushings just perfect, but now I have the spindle painted. I'll have to get some sand paper and take off the paint. While I was in the back of the tub, I decided to fit up my Army truck tail lights. Had to drill some new holes, and slightly enlarge two existing ones, but they will work just fine. 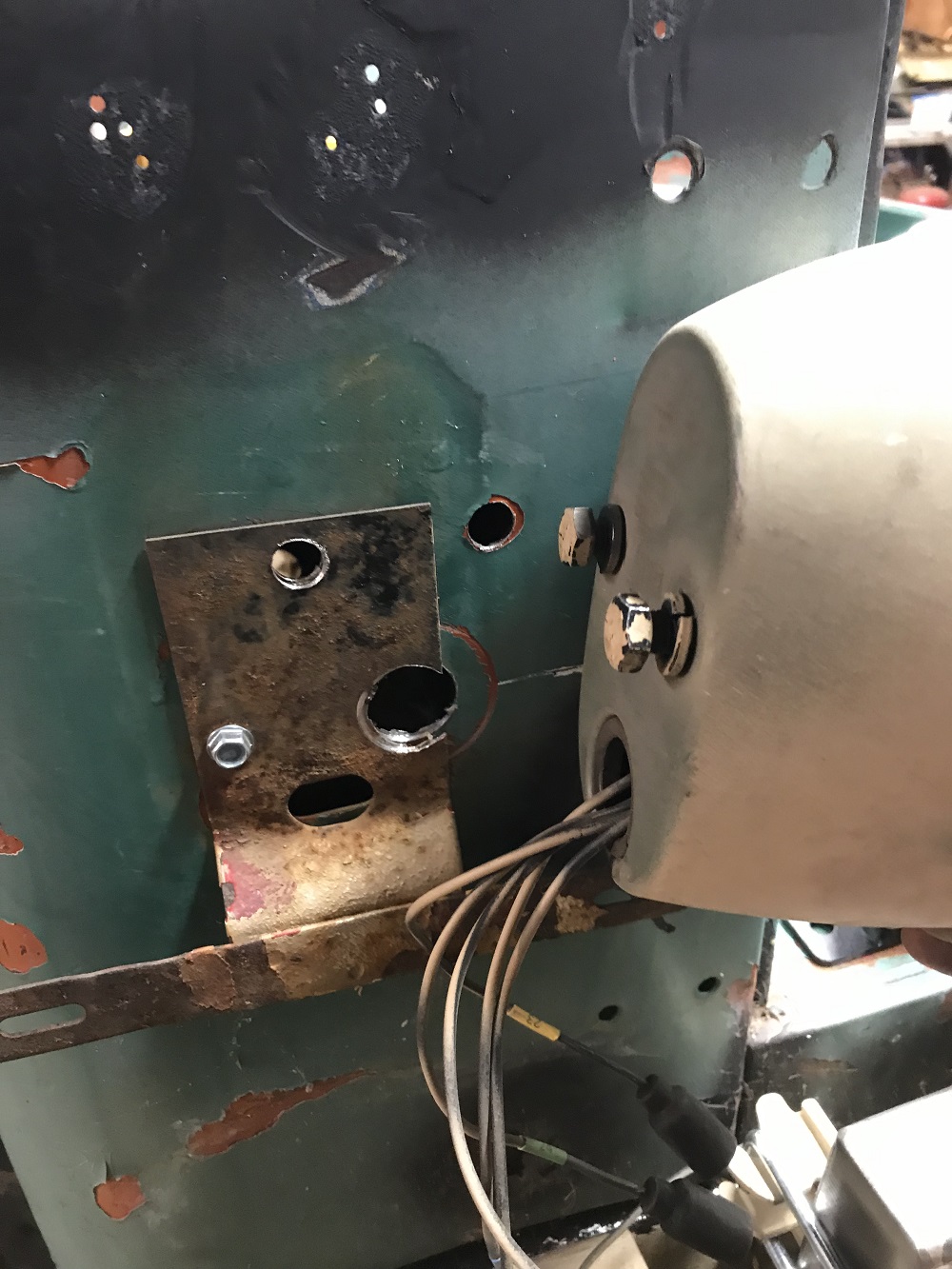 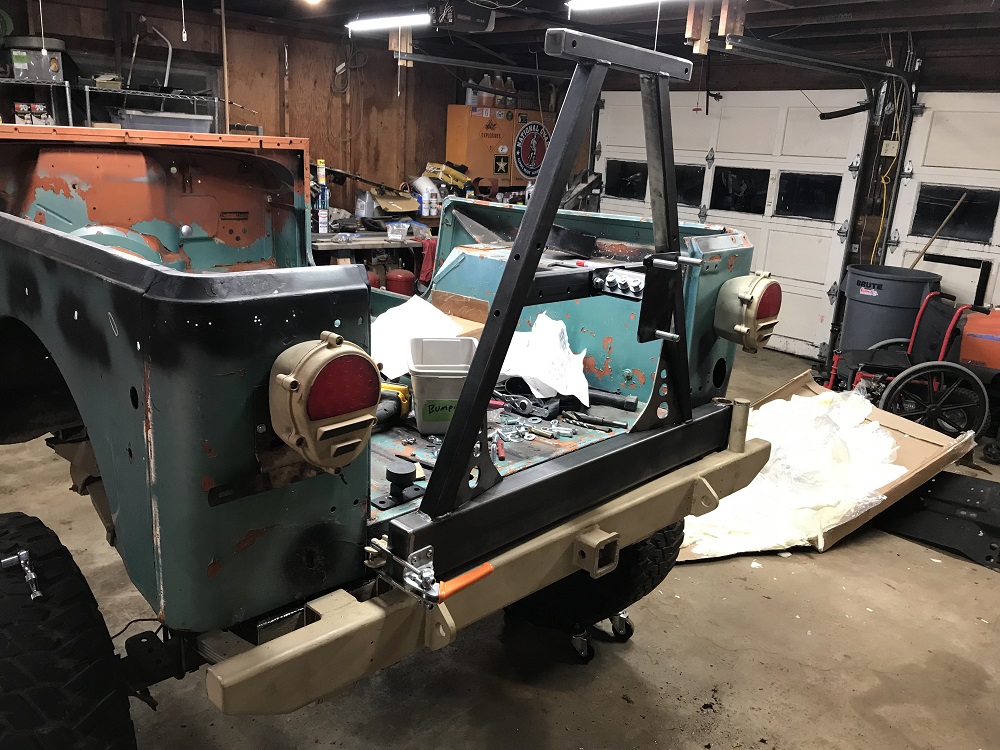 Crossing the Congo: Over Land and Water in a Hard Place
by Mike Martin, Chloe Baker, Charlie Hatch-Barnwell
From $23.65

Got the spring plate back from the machine shop the other day. They wanted to get the bracket off in good shape so they ended up digging into the plate a bit to get the factory weld off, but they filled it all back in. Once turned around, they burned in in place and all is well. 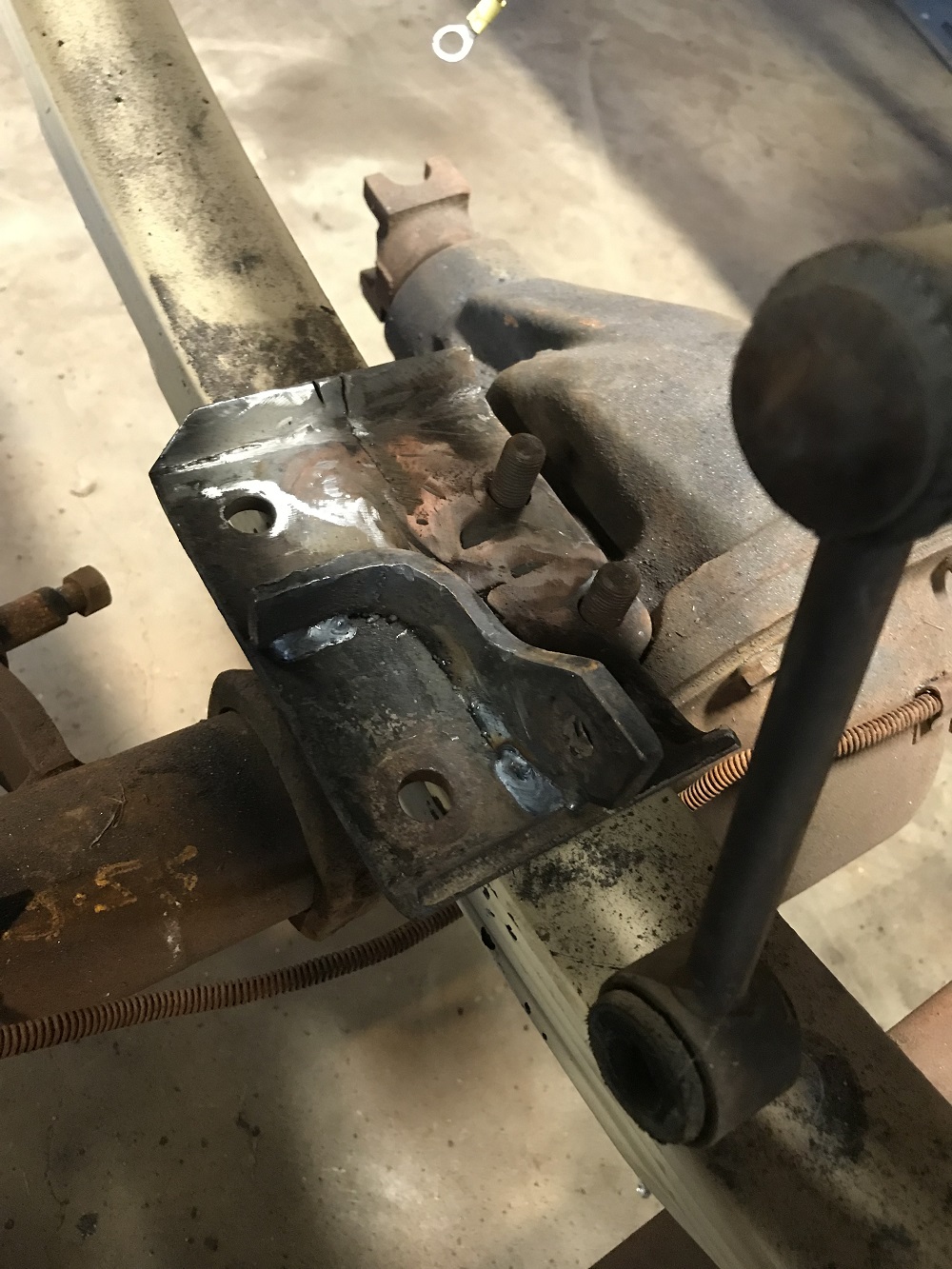 Home, and on to test the fit... everything lines up just fine. I'll be using the factory sway bar with my Dodge truck Dana 44... God likes me. 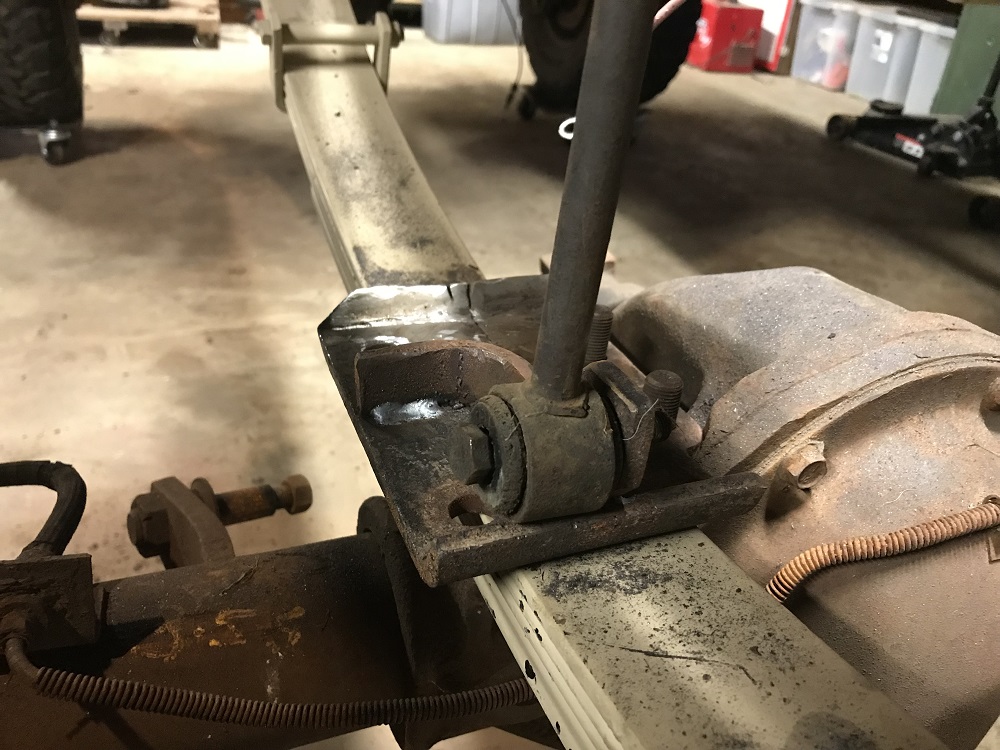 About an hr ago, I got a call from the other machine shop. The fuel tank skid plate is done. They had called me and warned me that it would be much more expensive to do it in one piece. The guy asked If I was ok with a welded two piece one, and I OK'd it. I also went with 3/16ths rather than 1/4, not only to save some $ but some weight. 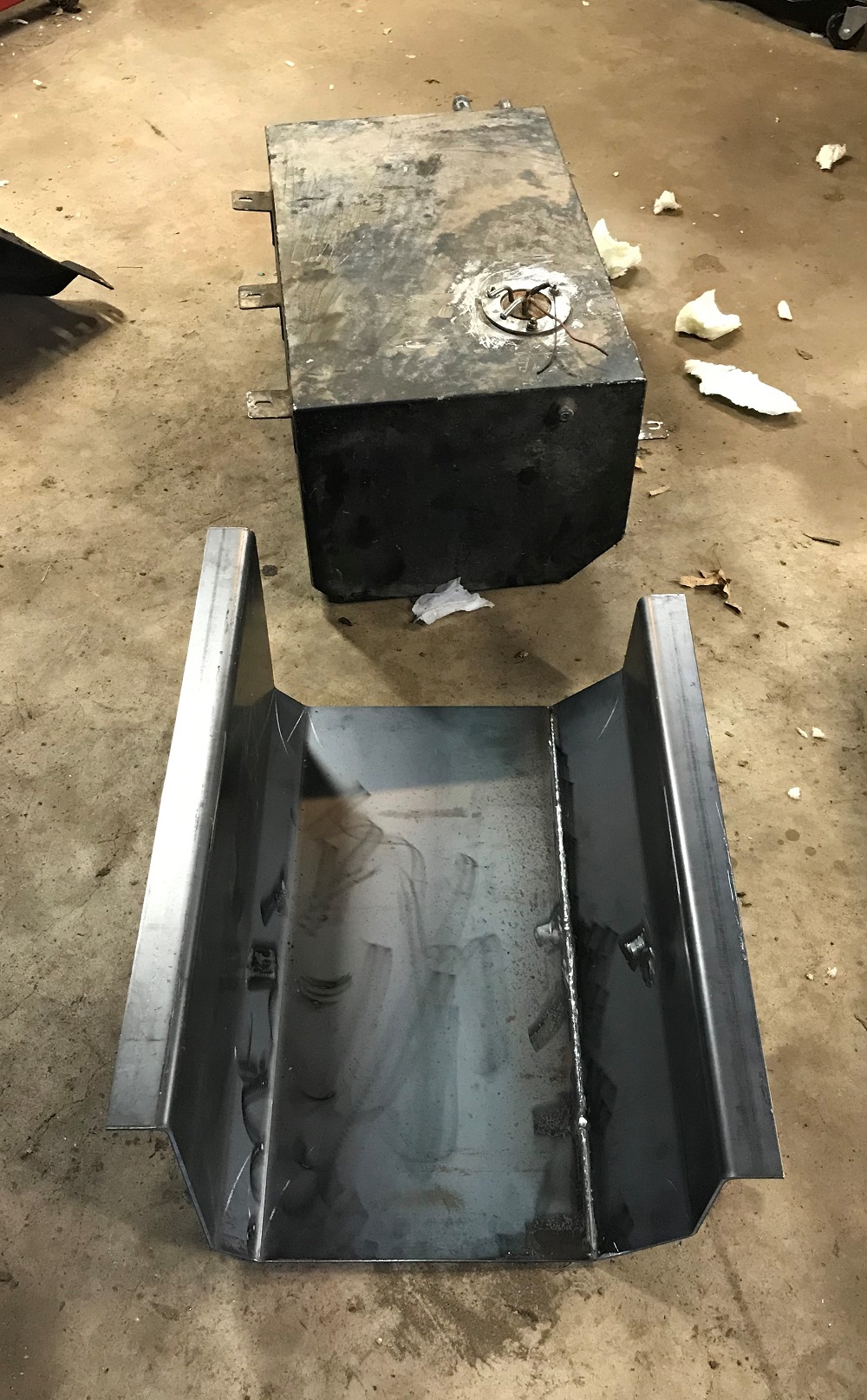 This is a lot more confidence inspiring than a naked aluminium fuel tank. 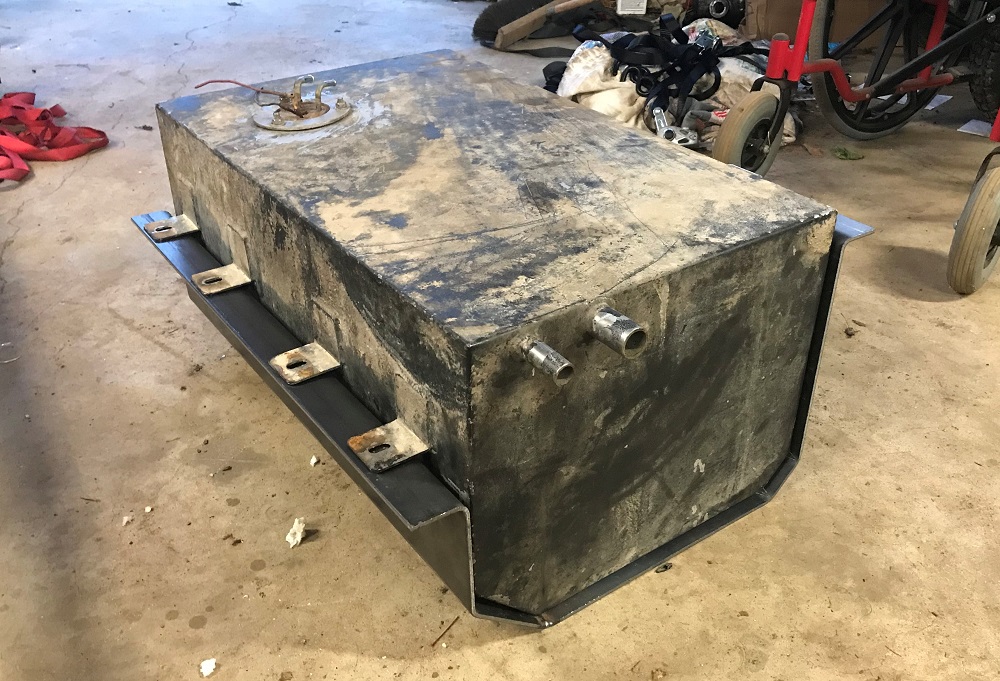 I'm wondering now if I should maybe paint the inside of the skid plate with underliner to help cushion between the surfaces. Anyone think there would be a problem with the tank rubbing on the skid plate. Should I have made then contour it so closely to the tank? I will put a couple washers between them to space it down, but nothing I can do about the sides. I had to have the mounting tabs match. I wouldn't think there'd be a problem. Lots of tanks are mounted with straps, but those are so tight there is no movement...

I would coat the inside with something, paint, underliner, bedliner but I would also think about putting some foam between the tank and skid. My Genright tank has about a half an inch of foam between it and the skidplate. Just a thought.

Now I'm thinking some strips of an old innertube.