I finally got around to finishing up the Dinamick Designs 450X tail conversion this morning. I am pretty happy with the results, pounds shed, a cheap and easy to find rear fender should it ever get damaged, and it produces a much more streamlined look. The blinkers are flush mounted and plenty bright, I went with the smoked/tinted in orange (he also offers regular in orange and regular and tinted in red) so that they don't stand out like a sore thumb when not illuminated. Now I need to order the front set to match.

He uses Honda OEM parts for the fender and electrical connections and stainless steel hardware and the plate holder design is first rate. It's not the cheapest mod out there but it is one that is well worth it IMHO. I hope to see more accessories/mods out of this guy for our bikes in the future. 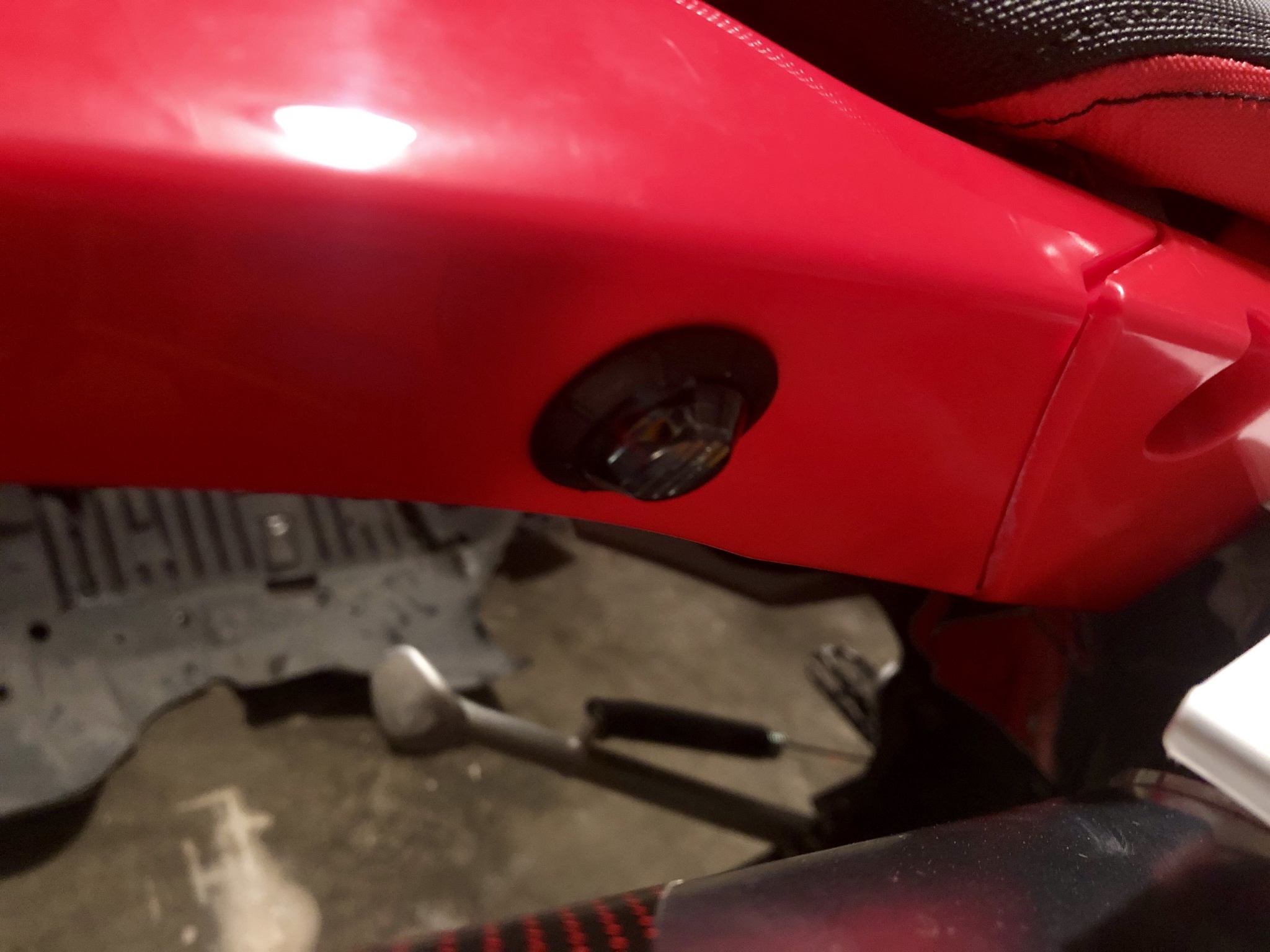 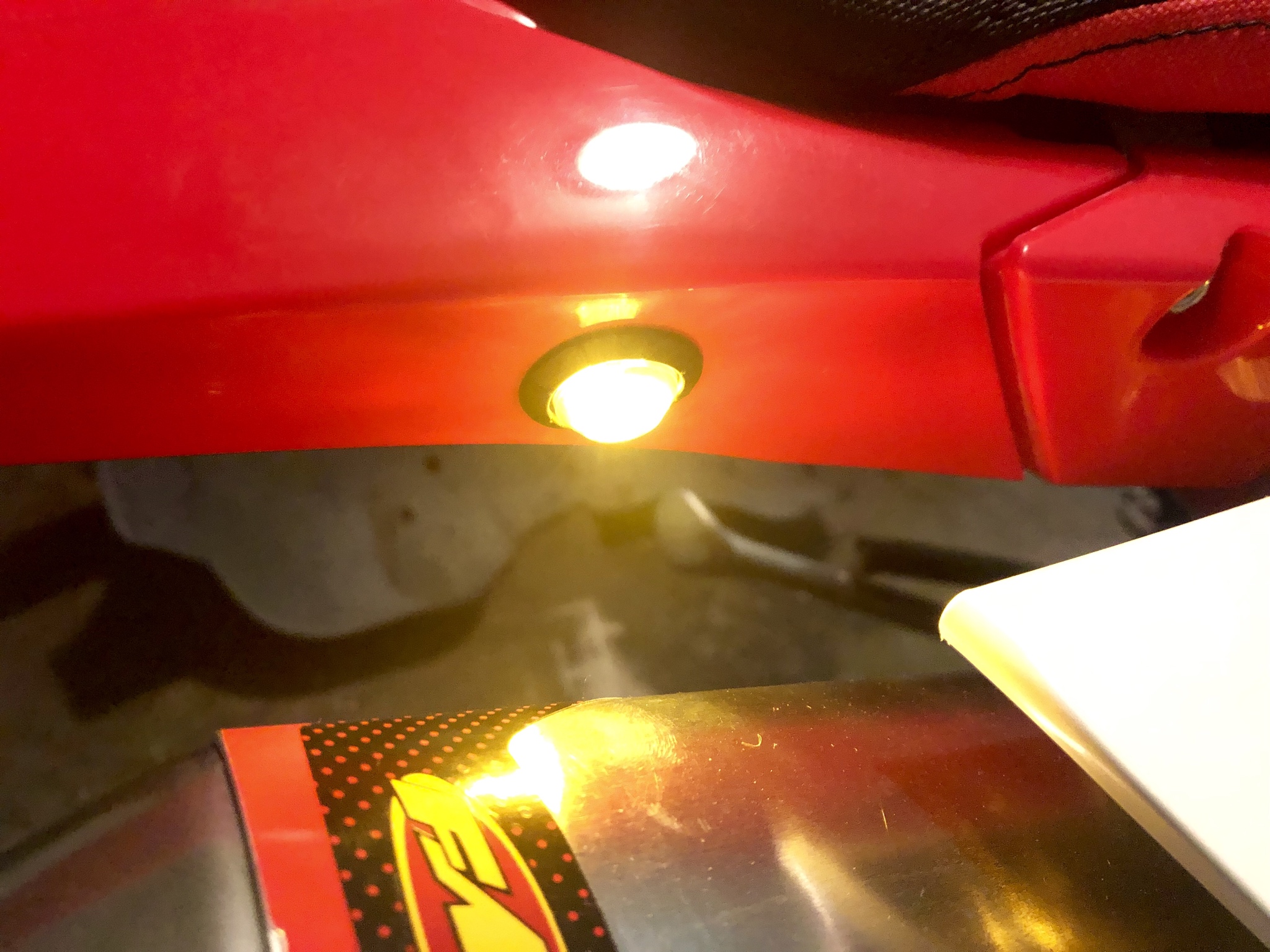 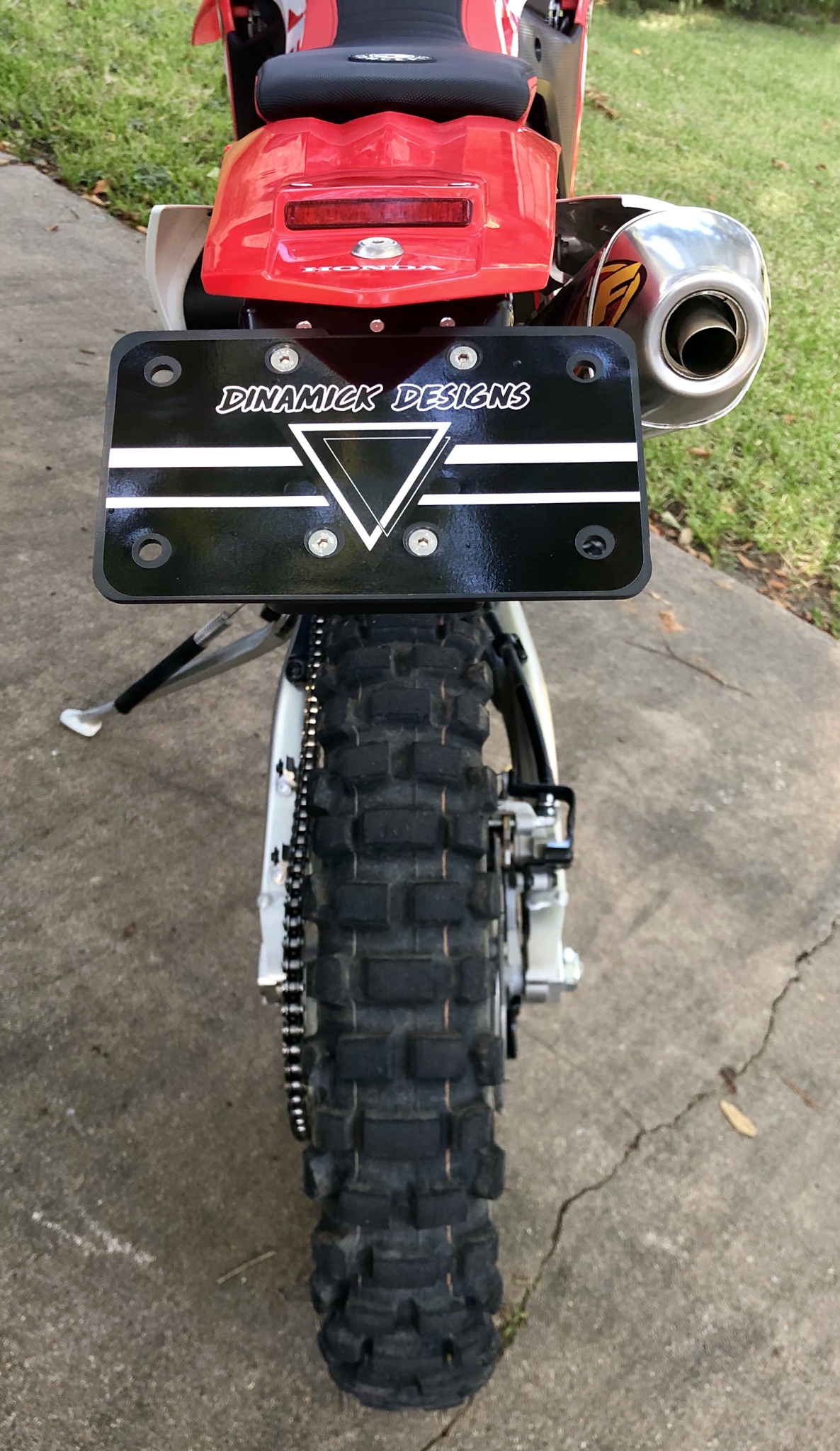 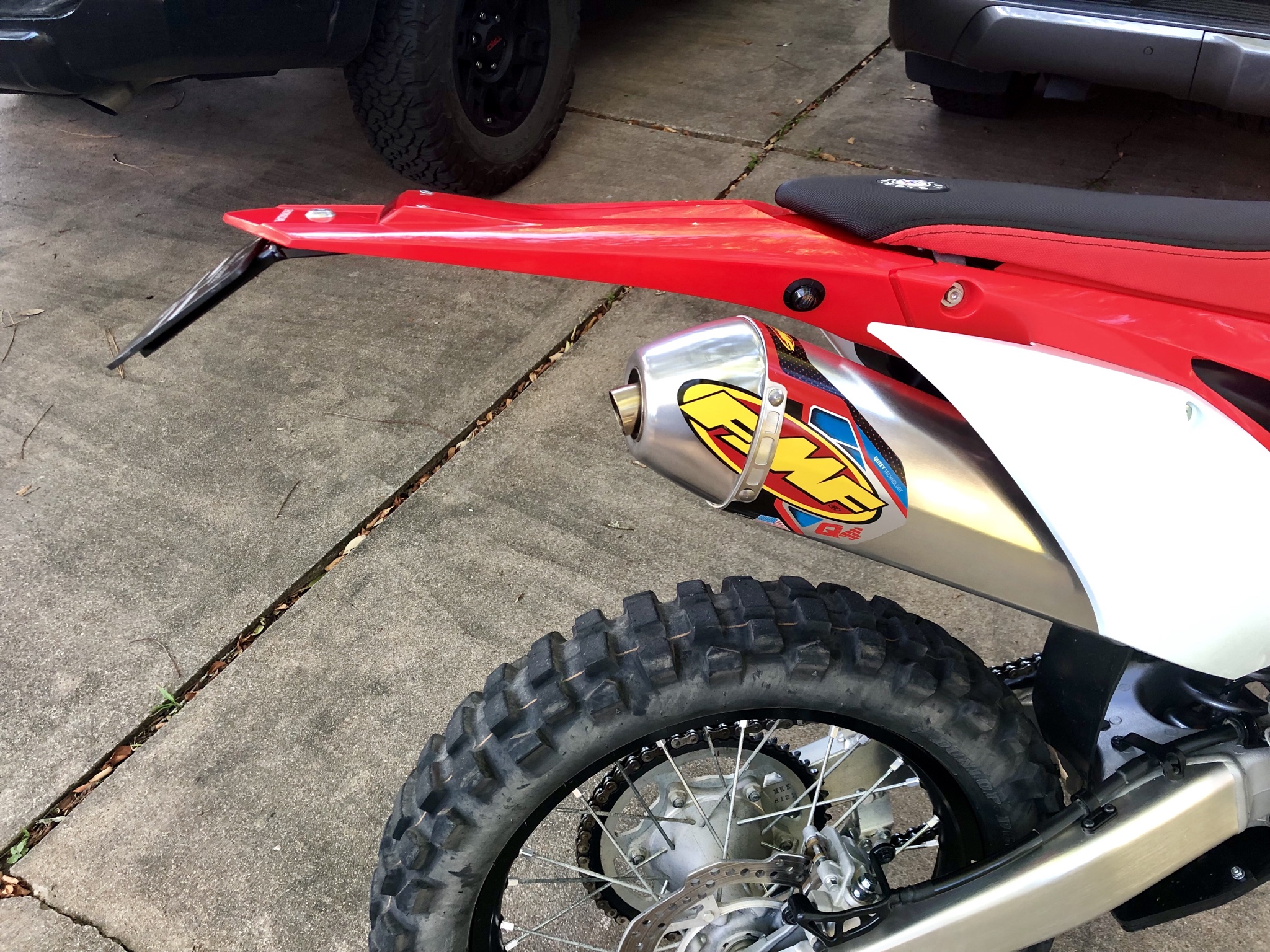 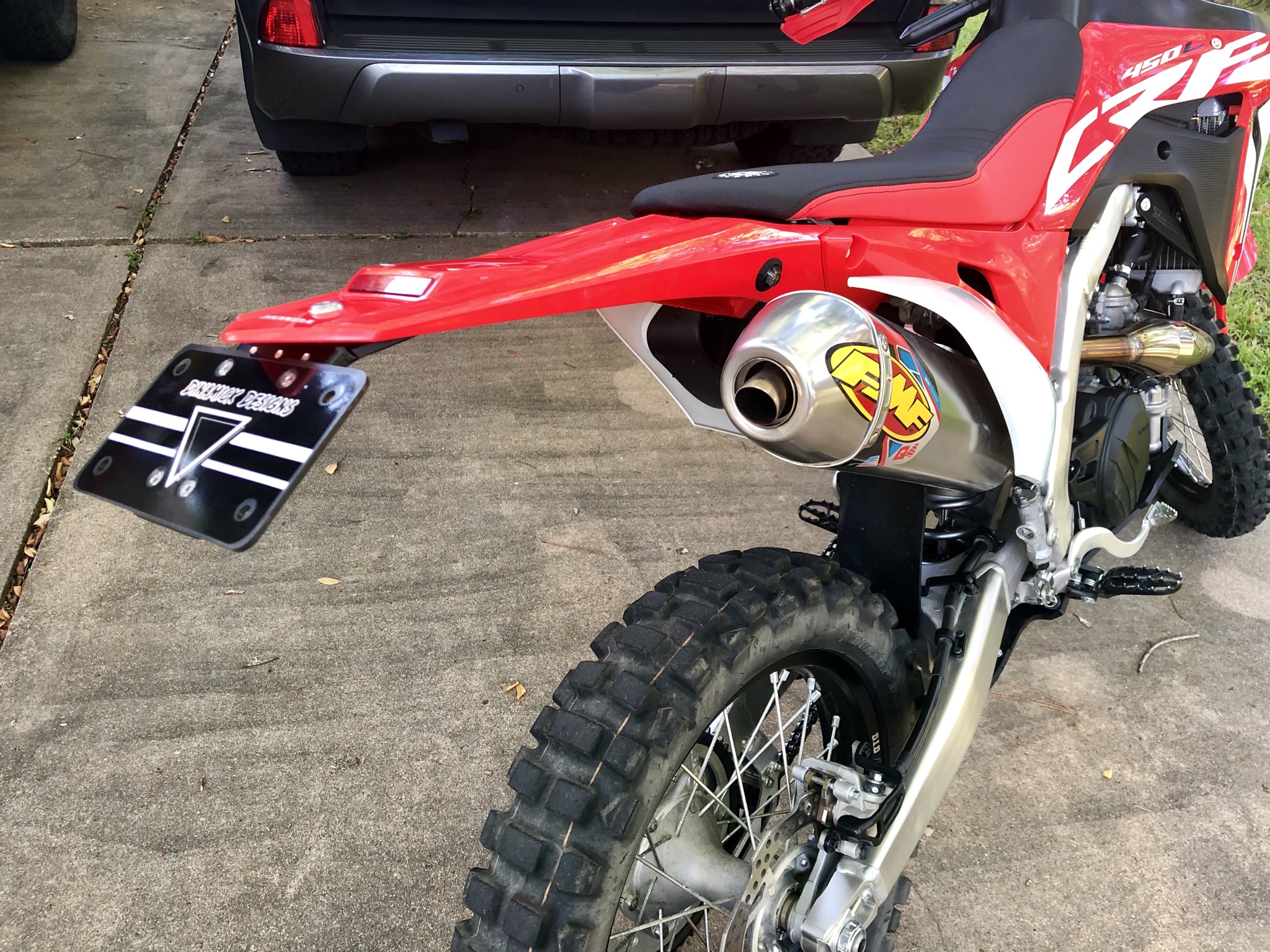 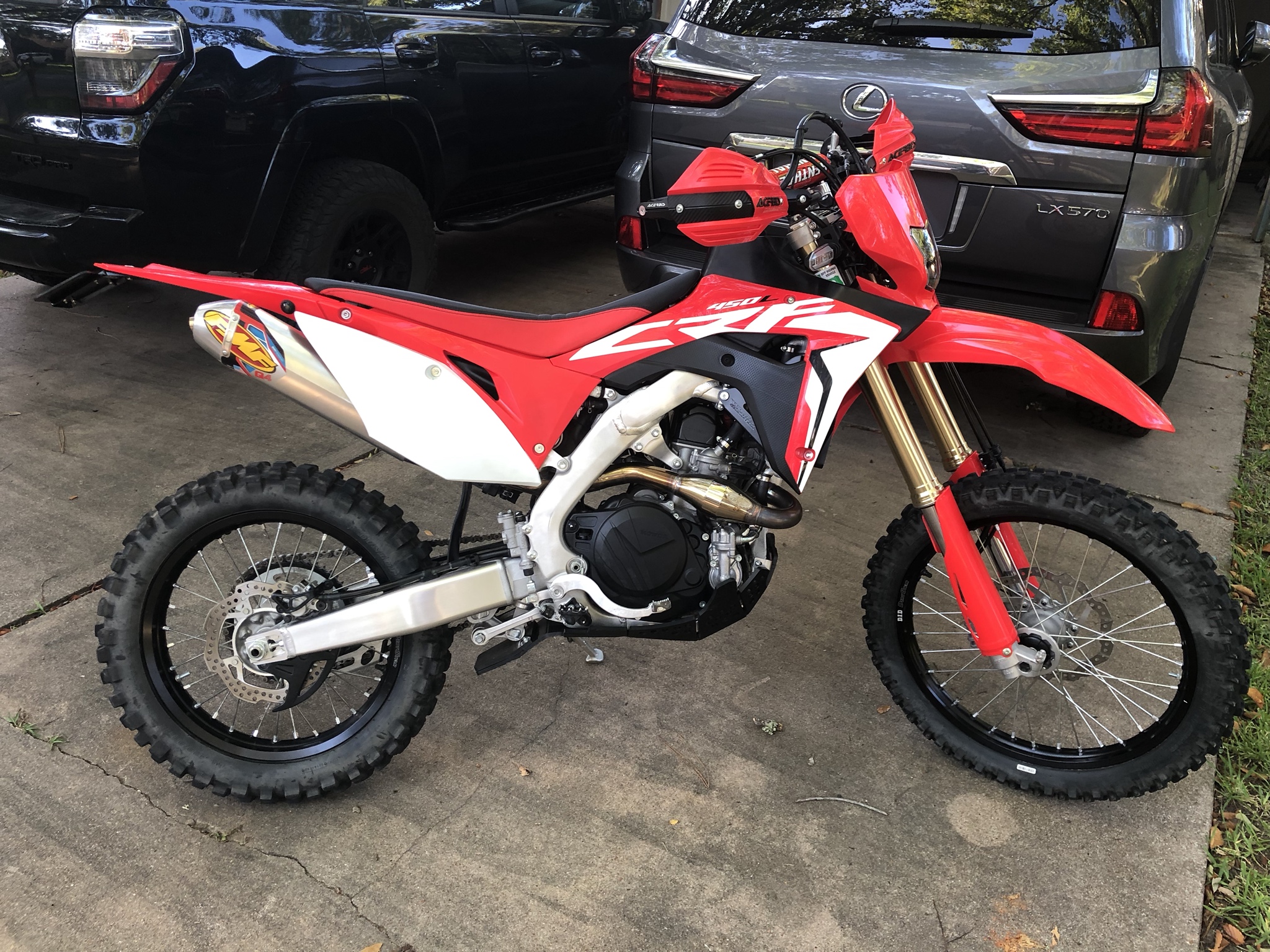 According to my scales I have removed 29lbs. 2.3oz. worth of factory parts and hardware from the stock bike. Now I have added back in weight with mods that replaced some of those items with (not including tire change), but that's a pretty significant amount of weight removed. Here are the items I added or replaced with aftermarket parts:

It's safe to assume that I have dropped a solid 15 or more pounds off of the stock bike weight. Granted there is now an extra gallon of gas weighing it down, but it just goes to show you that with a few aftermarket mods (most that greatly improve the performance and handling of the bike) you can easily bring the weight of the 450L down within 15lbs or so of its Euro competitors. I plan to remove a few more items in the coming months thereby further adding to the weight loss. 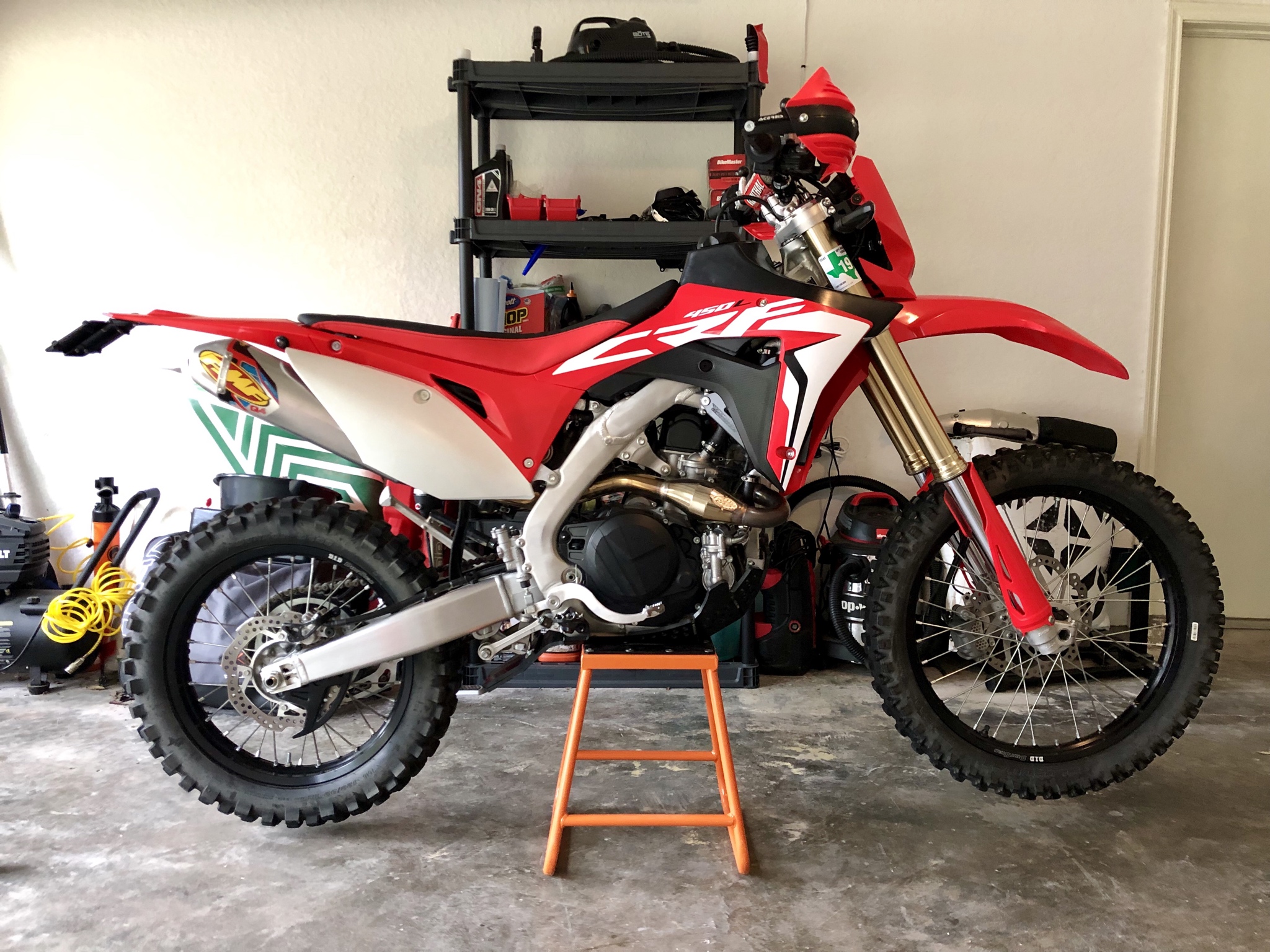 A morning rip down the beach on a weekday is hard to beat. 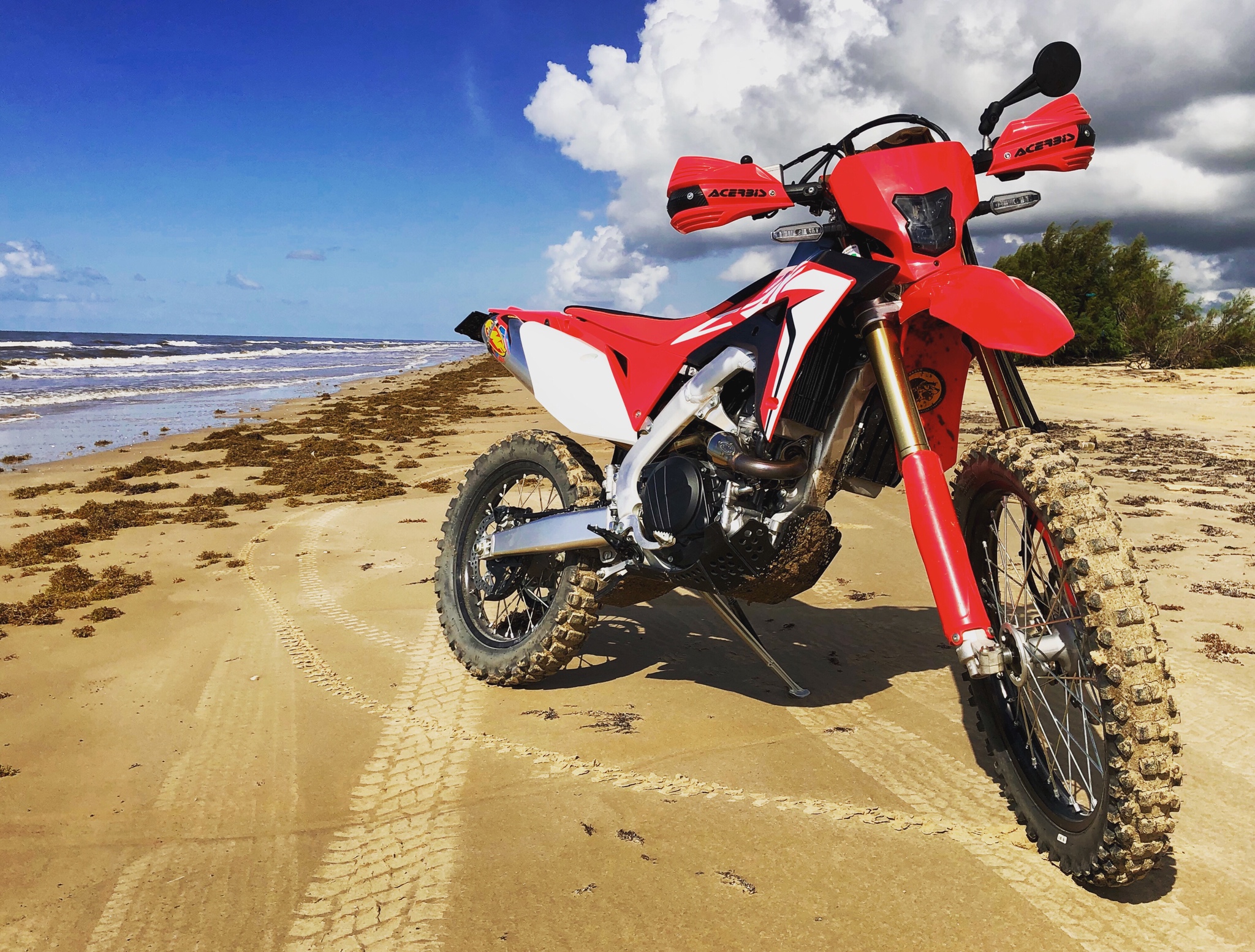 Riding High: The Stories that Jupiter's Travels Didn't Tell
by Ted Simon
From $19.95

This is somewhat of a field test/trial and error of a new old stock swing arm protector/chain guide guard from Bullet Proof Designs in hopes of adapting it to the 450X/L.

I originally attempted to make it work with the stock chain guide, but due to the design of the stock chain guide it is not possible without the use of custom angle cut spacers. This particular swingarm protector/guard was originally designed to be used in conjunction with a TM Designworks Chain Guide. I had planned on purchasing the BRP Chain Guide later this year when I replaced my chain and sprockets but seeing how I couldn't get the swingarm protector/guard to work without it (the BRP might work as well but for the sake of a guaranteed fit I elected to stick with the model it was designed for) I decided to go ahead and buy the TM Designworks Chain Guide now instead. I'd prefer to have one in black but I came across this new/old stock model in Red for less than half price so I swallowed my desire for black and ordered it so that I could pursue this project with less overhead/investment.

After trimming one of the mounting feet, reducing the radius of a spot weld on one of the swing arm tabs as well as creating a radius on the foot of the mount, I was able to massage it into place where the mounting hardware fully aligned with the swingarm tabs, the TM Designworks Chain Guide, and the Bullet Proof Designs Swingarm Protector/guard.

I have given Andrew at Bullet Proof Designs my notes on what needs to be modified and by how much in order for it work along with some suggested design ideas borrowed from the designs of some of their other swingarm protector/guards. I hope that they choose to modify and develop this item and work with me further in order to perfect it for use with the 450X/L so that others can benefit from an improved chain guide while protecting the swingarm tabs from nasty rocks looking to violently remove it from your swingarm (yes, it happens). And for those of you that might wonder why they need this you will soon find out if you ride frequently enough in rocky terrain, deep ruts, or through narrow openings. I have had multiple strikes on my stock metal chain guide and I have been lucky enough to not have any permanent damage from those incidents. This mod will help insure the long lasting life of both your chain guide and its mounting tabs. 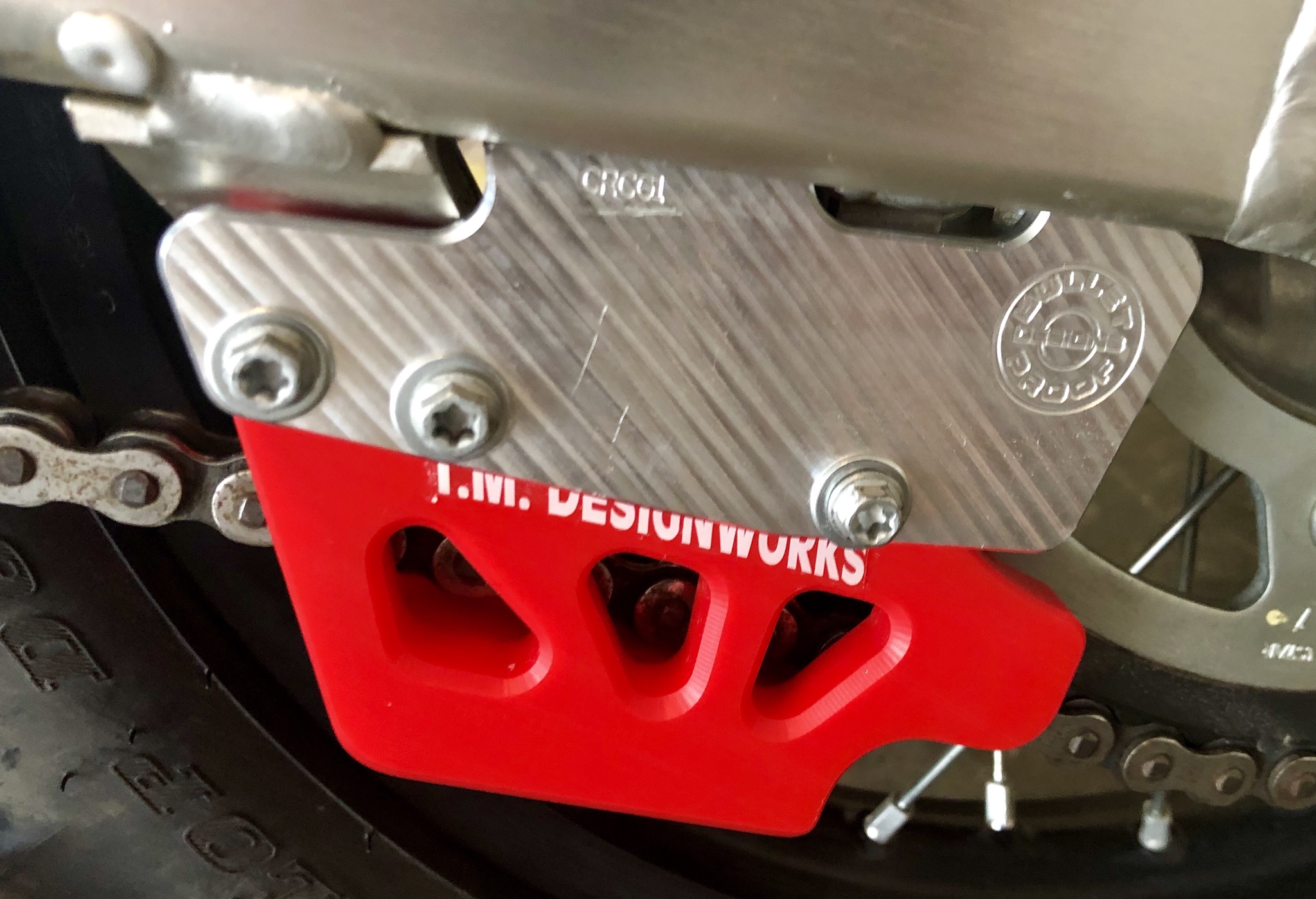 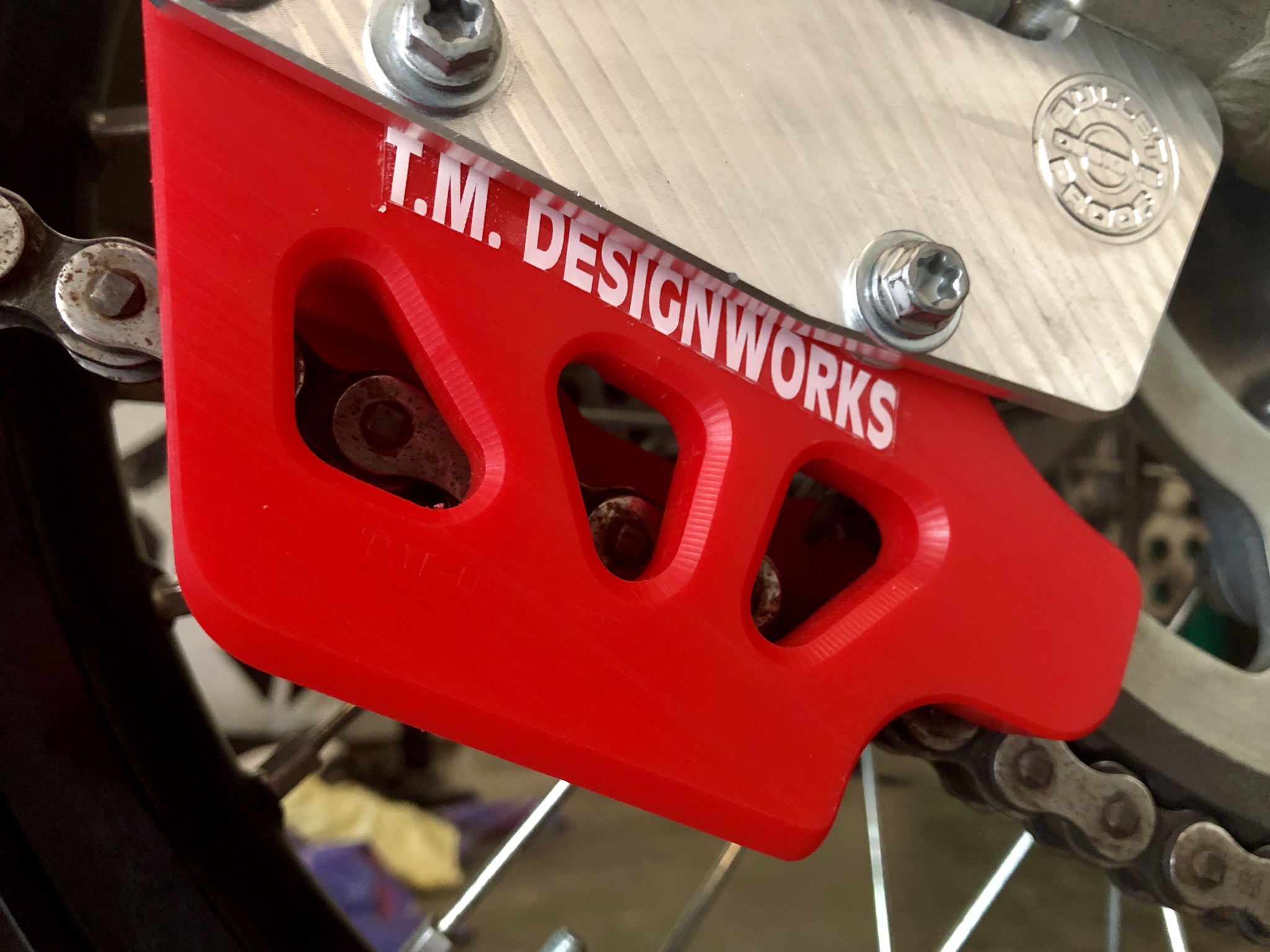 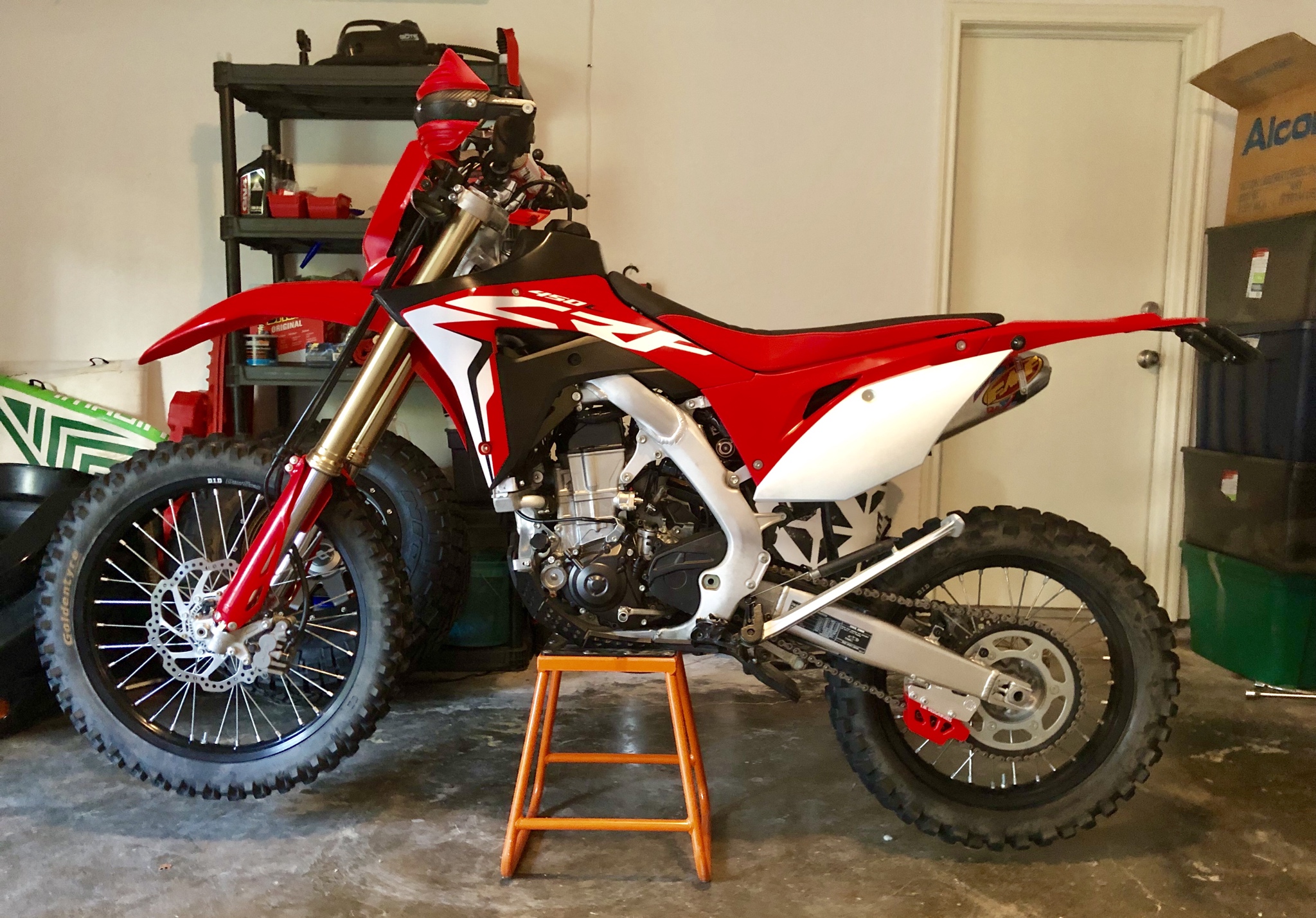 I am waiting on my 1200 mile oil change to change out the corroded oil filter cover and hardware created by the silly plastic engine covers (have since been removed). I picked up a Works Connection Oil Filter Cover in black, I think it'll go well with the other black bits on the motor. 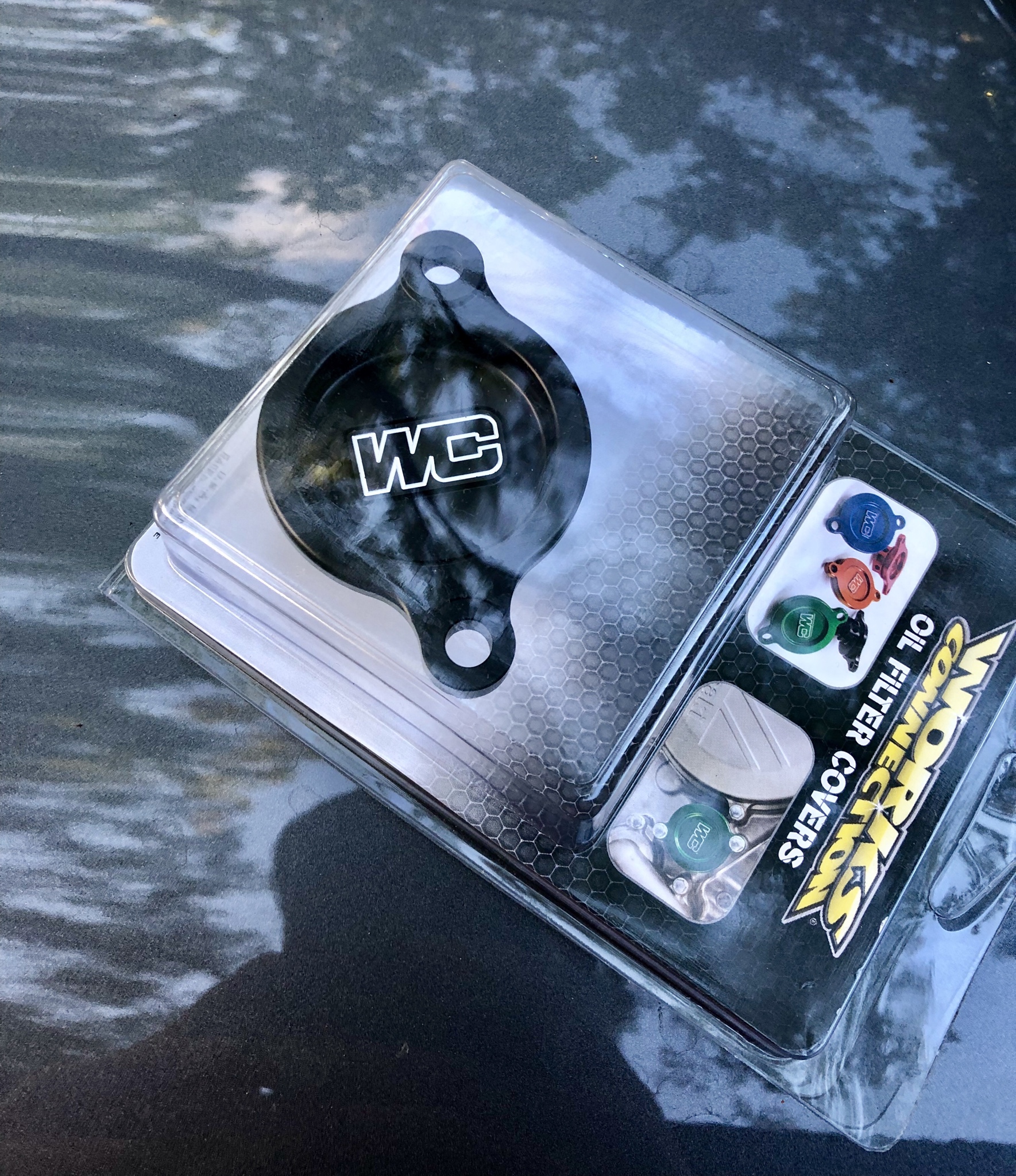 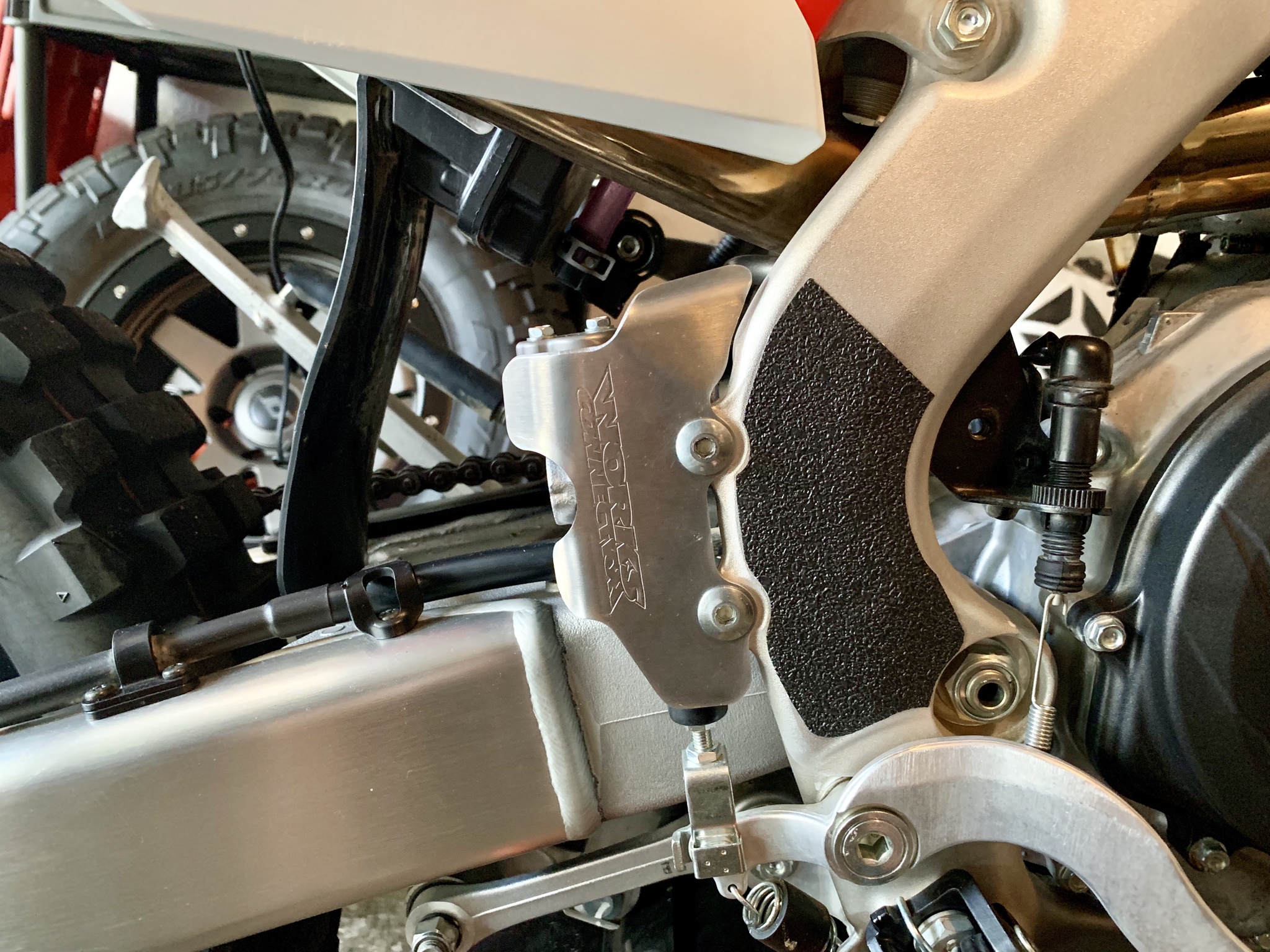 Tex68w said:
silly plastic engine covers (have since been removed).
Click to expand...

I've read reviews that claimed those covers offered protection and sound damping. Have you noticed any difference in the sound of the bike?

shade said:
I've read reviews that claimed those covers offered protection and sound damping. Have you noticed any difference in the sound of the bike?
Click to expand...

They are a thin plastic with some foam backing. I'm sure they quiet the motor noise down some but it's not anything noticeable to my ear and they do keep your boots from scratching the case covers but they aren't going to stop a rock from puncturing the side. I removed them because they trap water/moisture and dirt/mud and end up corroding and wearing things faster, they are a double edged sword and I prefer not to run them. A lot of 450L and 450X guys remove them for the same reason.

Makes sense. I had a hard time believing they offered significant impact protection.

Finally got around to the 1200 mile oil change, everything looked great. I got to swap out the corroded/rusty oil filter cover hardware and exchange the cover for the Works Connection billet aluminum, cleans it up a bit. I changed out the factory air filter for a Twin Air filter as well. Lesson learned, if you have the AXP skid plate, don't attempt to drain the oil with it in place, you'll end up with oil going in seven different directions with three times the work and mess to clean up lol. 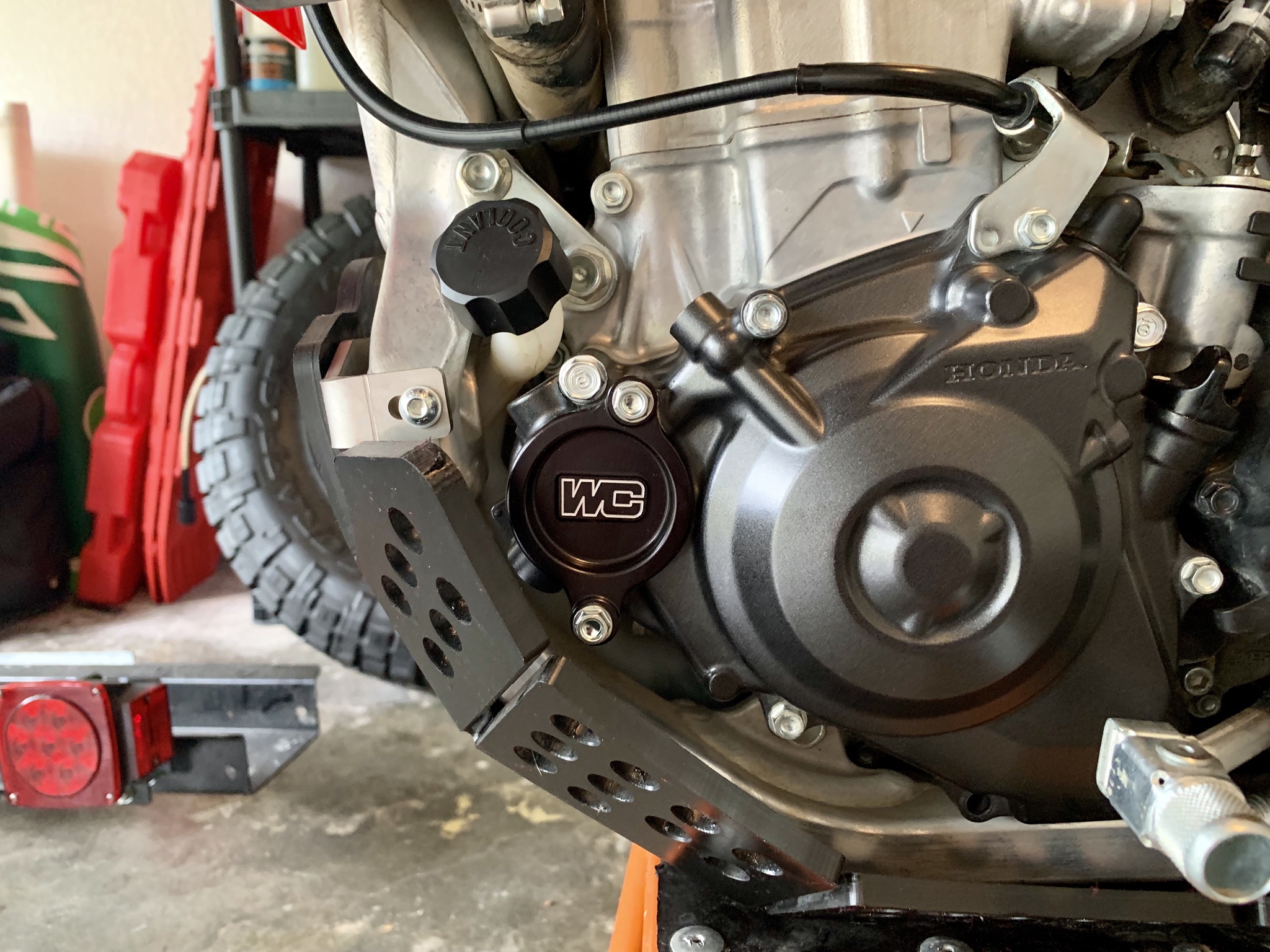 The Yamaha PW50 project for my youngest nephew is coming along nicely as well. Only thing left to do is swap out all of the plastics and fuel tank for new ones I have in boxes and put on some fresh forks. I ordered up some custom name plate decals with his number and name, I hope he will be as excited as I am about this little bike. I can't keep the misses off of it, she's constantly trying to take it for a spin around the block lol. 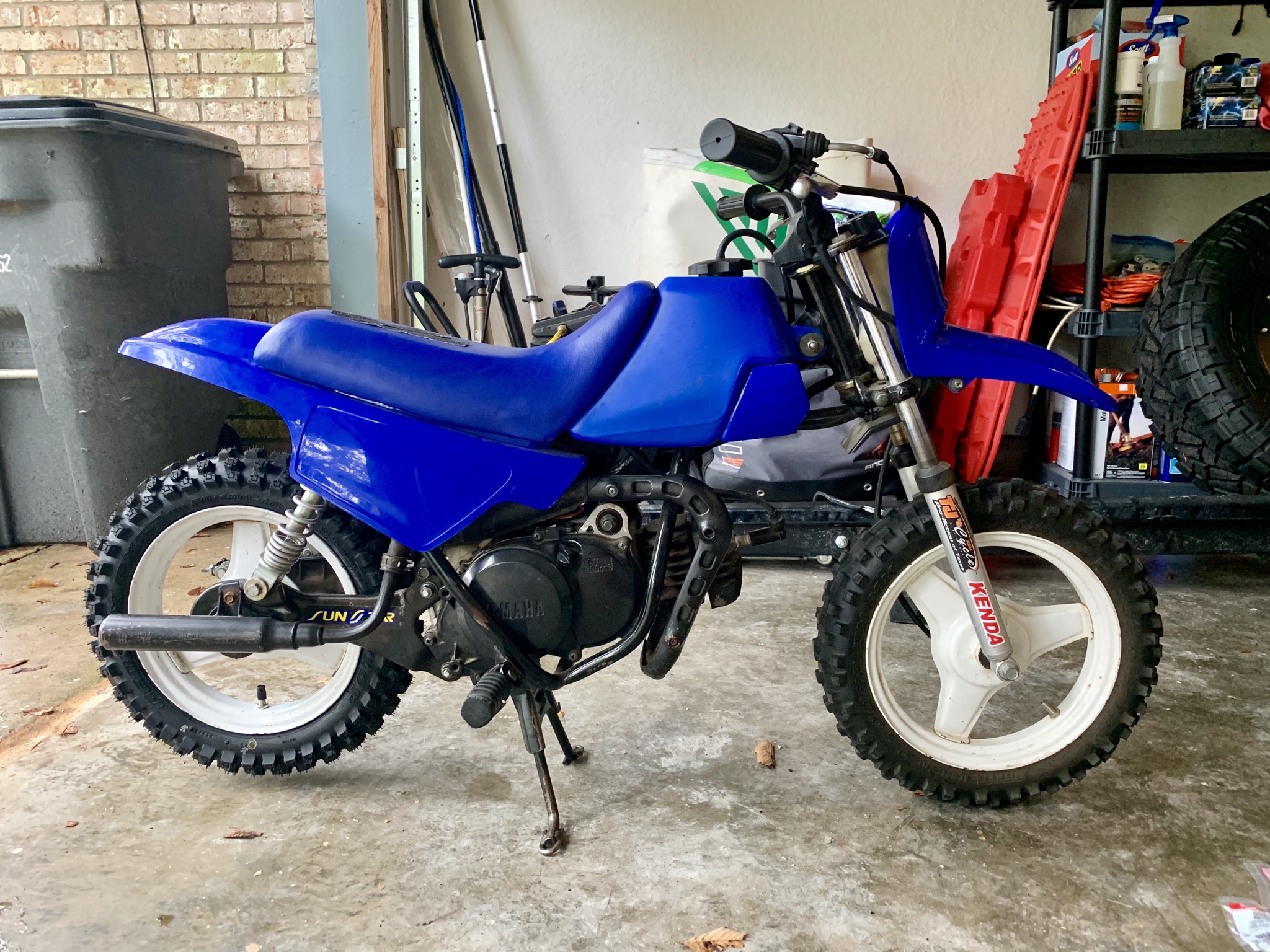 Tex68w said:
if you have the AXP skid plate, don't attempt to drain the oil with it in place, you'll end up with oil going in seven different directions with three times the work and mess to clean up lol.
Click to expand...

If you can sneak some oven-grade foil in there, you can do the form-a-funnel trick to keep the oil going where you want it. 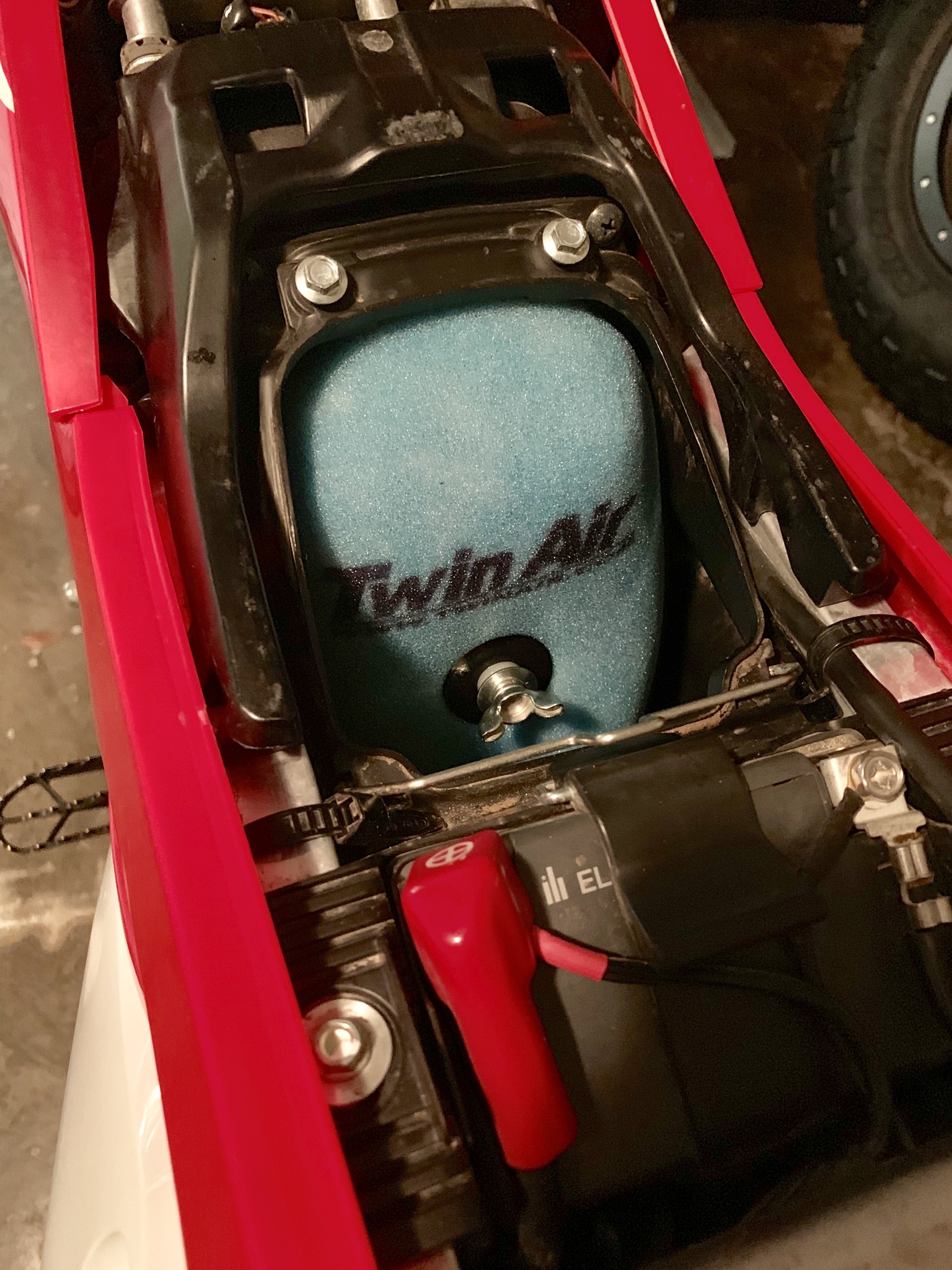 Well it was a long time coming but it finally got here and it's a damn fine piece. I am happy to finally have legit protection for the rear brake disc and I am looking forward to their bolt-on caliper guard that works in conjunction with it, it just has to be developed for the 450L first lol.

The rear pads looked great at 1200 miles so no concerns there. The Bullet Proof Designs rear disc guard weighs nearly 12oz. more than the factory unit. I'd like to thank Andrew and company over there BPD for being patient and courteous with me while I hounded them over piece for the past four months lol. 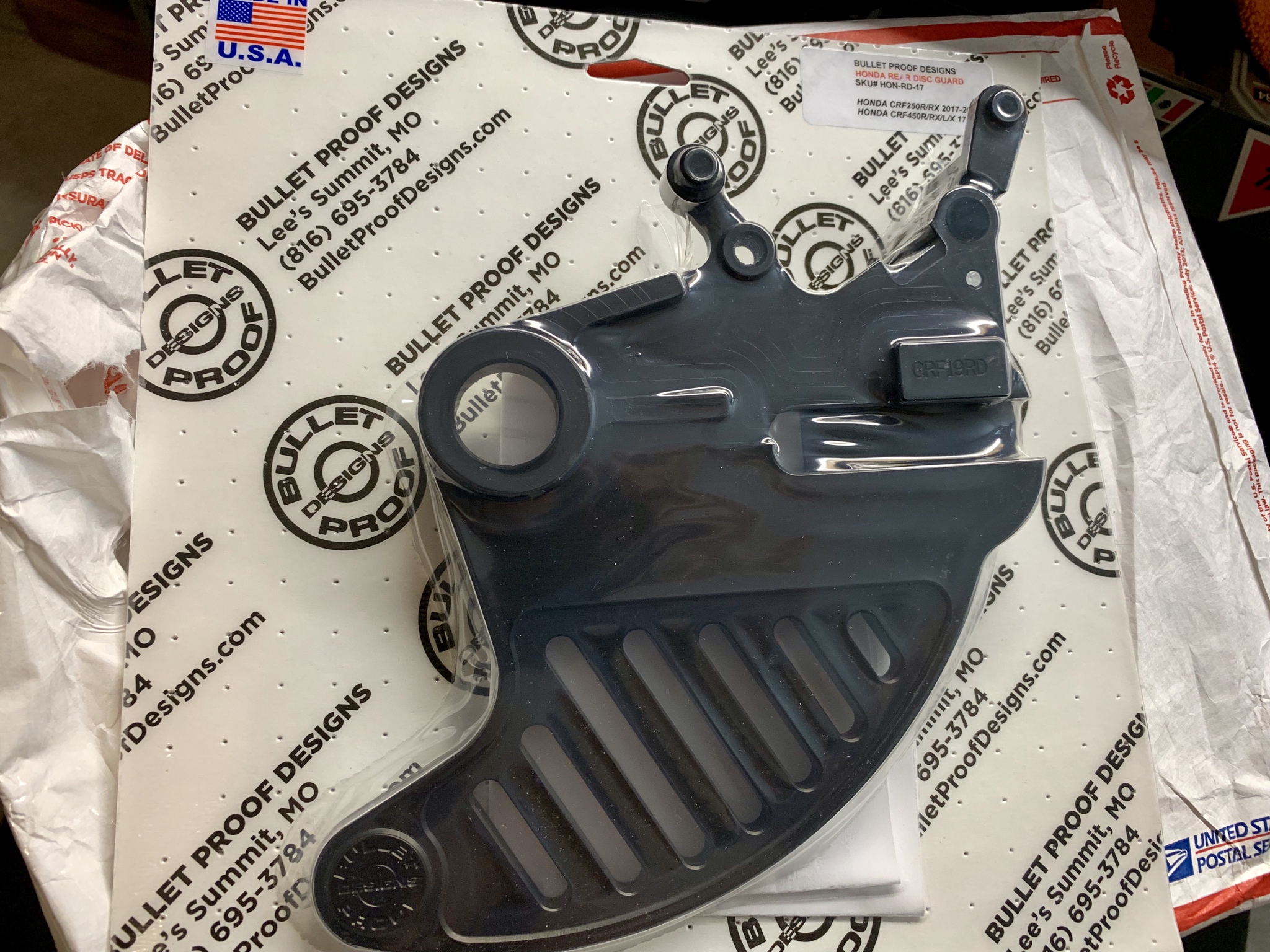 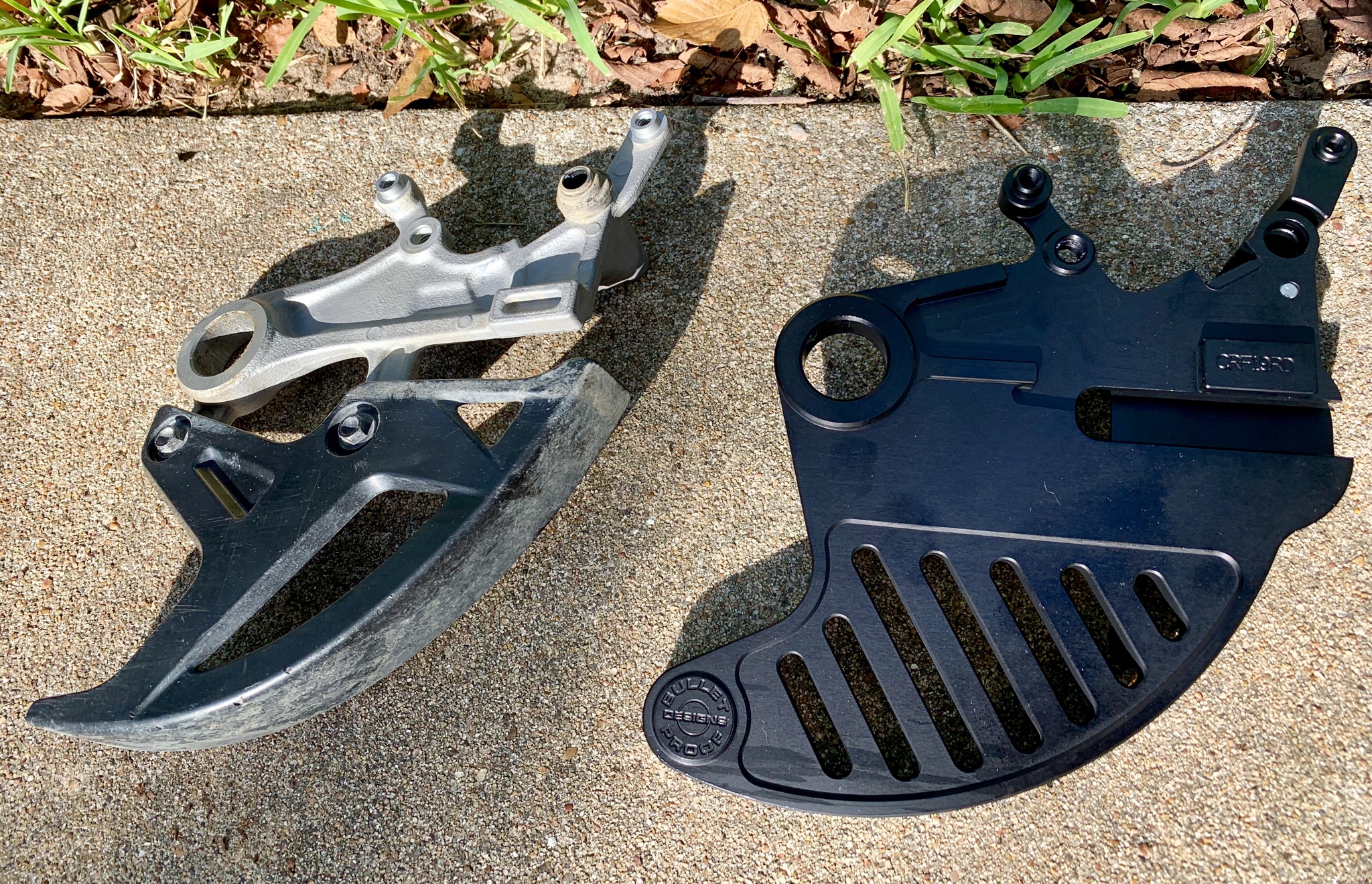 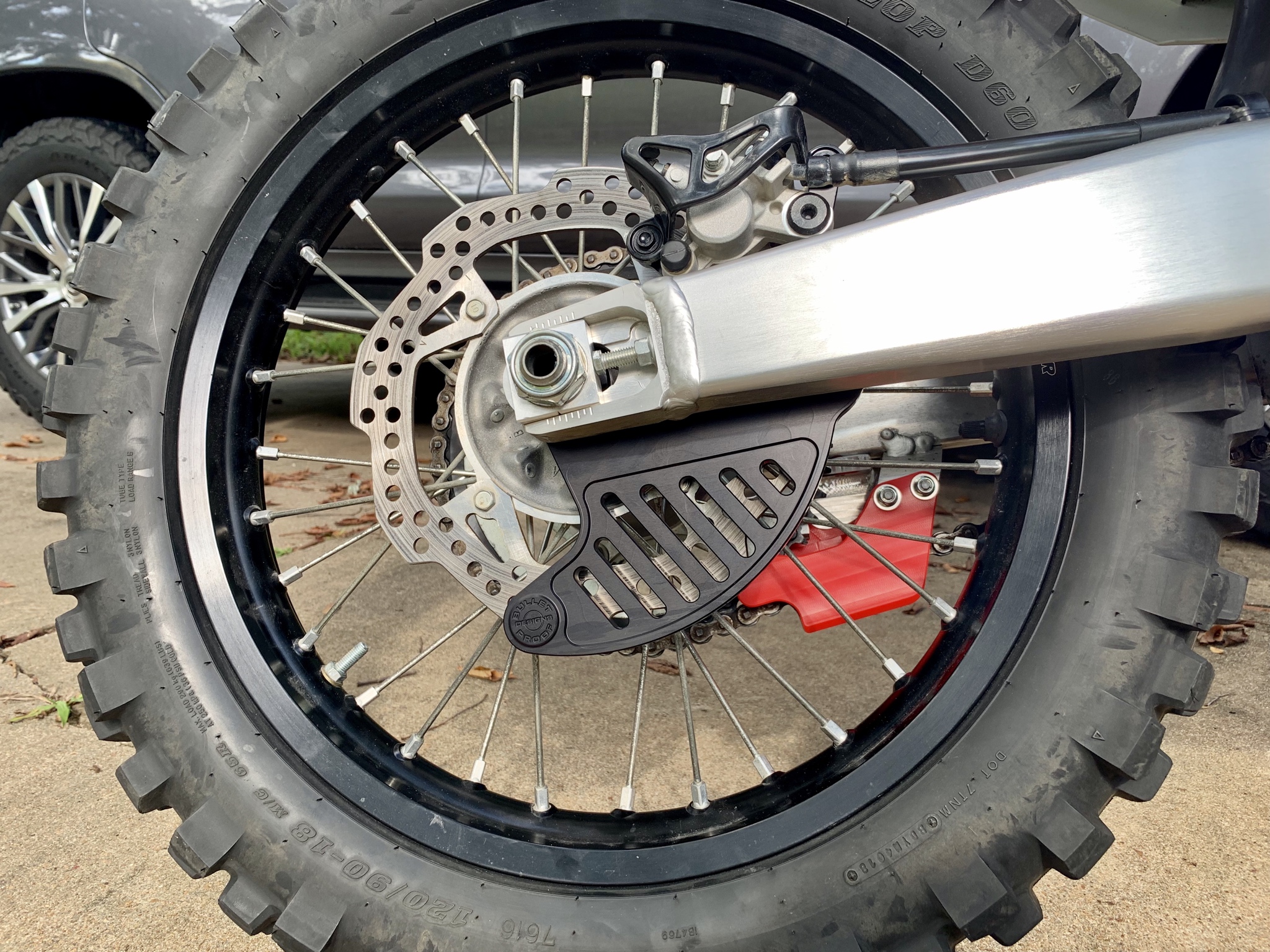 Cycling the Great Divide: From Canada to Mexico on North ...
by Michael McCoy, venture Cycling Association
From $9.99