Best Pop Up Truck Camper for Winter Use

I believe an Alaskan is going to be your best bet for winter use. Insulated, hydraulic raise and lower (think snow load), repairable...

Used Alaskans are often quite affordable, but depending on how they were used and stored might need some elbow grease. New Alaskans are pricy, but nice. By far the most comfortable camper I’ve ever been in.


ProfessorChaos said:
I am looking to purchase a pop up truck camper within the next year. I live in the Rockies so the pop up TC I get would have to do well in cold weather. Right now Hallmark is my top choice but I am also looking at Outfitters, FWC, and Phoenix. Which pop up do you think has the best insulation and would do well in cold weather?
Click to expand...

Here is the build thread on that.
Click to expand...

I like the idea of a hard side pop up and am surprised more truck camper manufactures don't build them however I am not all that impressed with the Alaskan interior.

Hallmark has raised the prices on their truck campers. $44000 for a standard pop up truck camper is way too much. I may have to look at either a Phoenix or an Outfitter. I am also open to buying used.
S

Ask Overlandex about their prices. I think they are under 30.000 US $

This is really ticking a lot of boxes, and seems to be redefining somewhat the pop-up camper ... made with modern materials and engineering, and capable of four season comfort in any geographical location.

Two things I'd really like to see are a full size (8') version ... and even more so, a shell only version in the same size.
Not that I don't like what I'm seeing currently for an interior, but some folks do like the concept of being able to complete the interior 100% for their own needs (or stick with the the bare bones shell for light weight and simplicity).

ersatzknarf said:
That turned out really well !
Click to expand...

Appears it would take a little more abuse than a FWC/ATC...like dragging tree limbs and such down the side. IIRC they build bodies for firetrucks as their main business, right? So the knowledge is there to build a product that is going to get used and abused.
K

I owned one of these kodiak canvas cabin camping tents. When I took it elk hunting in winter I used 1 inch foam insulation wrapped in drop cloths to insulate it. It's help a lot but it made it black as pitch inside during the day.
Last edited: Apr 27, 2019
C

Are you offering an 8' shell-only?

We will be producing a well equipped 8' model, not a shell though.
R

No shell for engineering reasons, or marketing reasons?

Shells definitely seem to be a large part of this product demographic.
C

I would be interested in a shell if you decide to offer one.
W

A good read following the discussion here. If anyone is interested I have a Hallmark Ute XL popup camper that has the new style fiberglass roof and fully replaced insulated canvas on the 2003. Would make a good deal for someone looking for this type of camper.

We had a Bigfoot trailer. Well insulated, great heater and very snug. We saw cold as low as below zero (farenheit) and at altitudes. We controlled the condensation by opening vents a crack (point into the wind if it is raining or snowing)- this is especially important over your sleeping area. Then we mounted a little 12v Caframo fan (hi/lo, no cover and very little amp draw). Open your blinds/window coverings, set the thermostat to where you want and what used to be a damp night is pretty much dry.

For those of you that have had moisture, check under your beds. Condensation will seep down around and into your bed. Mold will form on the underside of your bed. Old boating trick for cruisiers was to get very coarse air filter (for house heaters) and put them under the bed. You can buy actual product that is specifically made for that scenario (that is what we used) or a lot of hardware stores sell something real close. Anyway- using a few old boat tricks- never had a condensation problem and we kept our back-country skis with us during the winter and were always winter camping (full-timers).
T

I know this is a little late in the game, but I owned a Hallmark Guanella for 5-6 years, and I spent well over 400 nights in it. I live in Montana and used it year round. I spent a week in -10 to -20 temps during a blizzard up in the Boulder mountains during elk season and other than the water pump freezing, it was a great camper. All I had to do was open the floor where the water pump was housed and eventually it thawed out.

Just keep it vented to avoid excessive moisture and they are good to go.

I miss that camper, and I'll more than likely buy another. They are well built, and yes- you can certainly 4 season camp in them.

This was our base camp for 2 weeks. This was the day before the blizzard rolled in. It was 65deg and overcast. All my friends in the outfitter tent bolted until after the storm. I stayed. 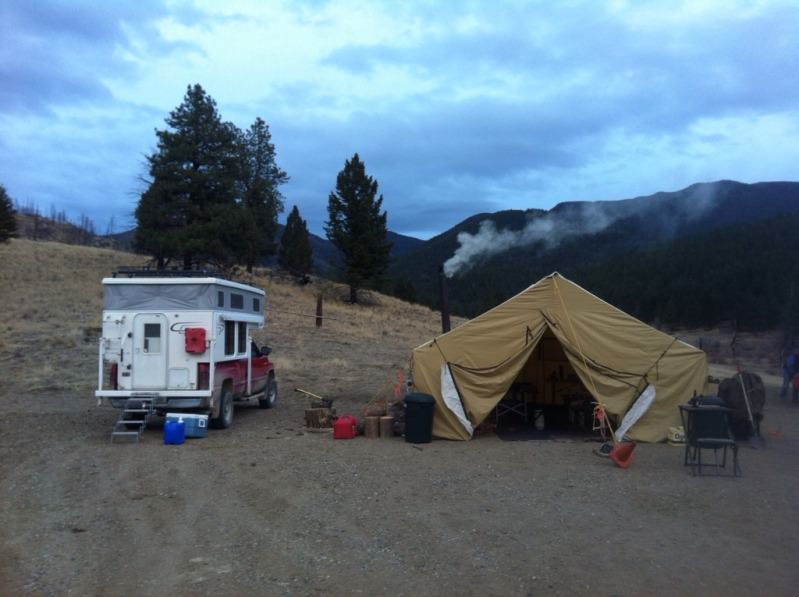 Next morning it was -10 and coming in waves. Eventually we got over 2ft of snow and mega drifts. 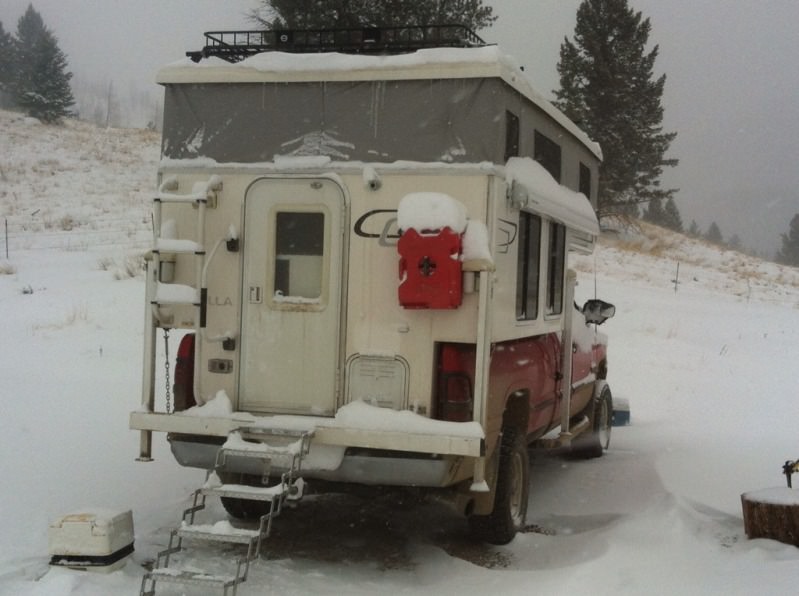 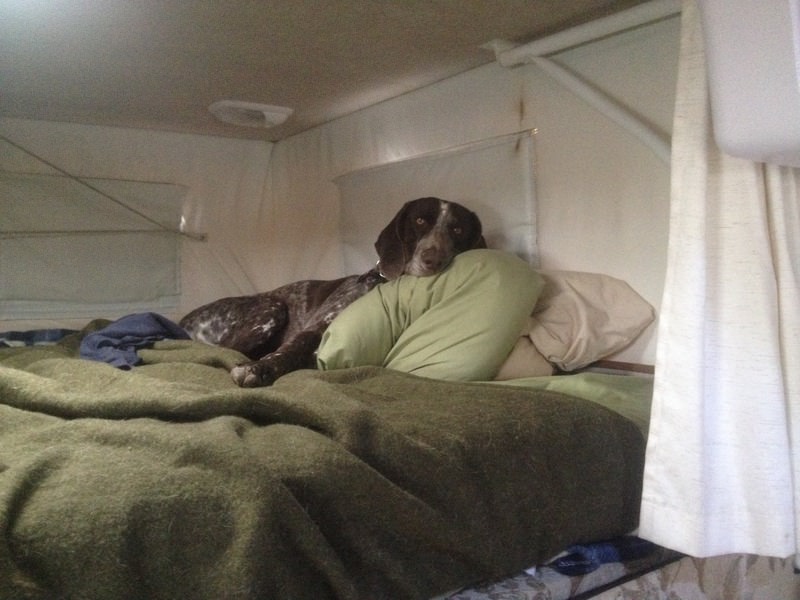