Cab to Camper Pass Through???

I love my Sportsmobile van, but am currently selling it and working on plans for a new build. One of the best features of a van is that you can access everything without going outside and/or raising a roof or anything like that. I'm thinking of using a full size truck and building a box style expedition camper on the back, after removing the bed. My question for this thread is how to best build a pass through from the cab to the camper. I want it to be completely weather proof, as big as possible and lockable. Any and all thoughts appreciated. Just trying to get some good ideas to solidify my thoughts on how good an idea this undertaking might actually be.

A lot depends on whether you're going to mount the cabin so it will move independent of the cab. A few trucks, most notably Unimogs, because of their designed-to-flex frames, have to have their cabins mounted this way. If this is the case, then you have to have a gap of several inches which you weatherproof with either a flexible bellows or by having a protrusion on the cabin that slots under or over a similar protrusion on the cab. If you have a Low Cab Forward truck with tilting cab (e.g., the Fuso FG), then the gap has to be bigger and the bellows (if used) needs to be detachable.

It you are going over sufficiently serious terrain, the flexible mounting system is considered important, as rigidly mounting the cabin can cause all manner of stress-related problems.

That said, the majority of truck manufacturers brag about their essentially-unbendable frame rails (36,000 psi yield strength on a Super Duty cab-and-chassis up to 120,000 psi or better on something like a Kenworth T270) and you can certainly handle modest off-pavement work with a strong-enough cabin rigidly bolted to a strong-enough frame. In this case, you can pretty much snug up the cab and cabin together. Take a look at examples like ambulance boxes or a cargo cube vans to see how they do their partitions on cutaway and cab-and-chassis vans. Using a van-derived cab-and-chassis (e.g., E-Series, Express/Savanna. Promaster; Sprinter) gives plenty of height to make the passthrough pretty usable. The passthrough on a medium-duty conventional truck with a flat back wall, like the Internationals, Freightliners, etc., will likely end up somewhat smaller but still usable.

But if you decide to use a pickup-derived unit like an F-series, the maximum size is much smaller. Check out how they do an ambulance box on an F550 as an example. (Though you can get around that be having a cabover cabin section that goes over a crew cab; look at the EarthRoamer XV-LT to see that approach.) And if you use a cabover truck, the position of the engine and transmission will limit you to a pretty small "crawlthrough." The Earthcruiser is a good example of the best you can get on a single cab LCF chassis.*

Let me know if you need directed to any photos to illustrate these examples. Good luck.

*FWIW, on an LCF crew cab, the cab doesn't tilt and you could theoretically have a decent passthrough, but they all have a structural tube behind the front row seats that pretty well limits the ability to routinely walk further back in the cab.

Thank u for the response

GoBig said:
My question for this thread is how to best build a pass through from the cab to the camper. I want it to be completely weather proof, as big as possible and lockable. Any and all thoughts appreciated.
Click to expand...

Weather proof ..... easy but worry about heat and noise from the engine if you have a cab-over format.

As big as possible ...... just remember this is a trade off for usable wall space. As big as you need to crawl though might be better. That said if your camper seating is against the passthrough, having a large hole provides a much better view through the windscreen.

Lockable .... good idea. It wouldn't be the first time some drongo has broken into a cab to gain access to the rear camper.
B

Years back I purchased a one year old Dodge 1ton with the cab to bed area cut out. Initially I planned on repairing the mod, but actually grew to like the set-up. I used a new bellows style seal that was weather tight, but noise was significant (diesel) then I used heavy rubber bed mat material to kill the sound. Then matching headliner panels to complete the look. The opening would really need to include the removed rear glass plus only the width between the seats down from there, perhaps 24", not full width.

You could just start with the window boot initially to see if it's for you?

I replaced the back of the cab and the glass when I sold the truck.

Appreciate the ideas guys. I'm thinking Dodge 25000 Cummins from the early 2000's, or something similar. Remove the bed and build a custom camper box. I'm pretty keen on a passthrough. Any thoughts or examples on how this can be done/what this might look like?

GoBig said:
Appreciate the ideas guys. I'm thinking Dodge 25000 Cummins from the early 2000's, or something similar. Remove the bed and build a custom camper box. I'm pretty keen on a passthrough. Any thoughts or examples on how this can be done/what this might look like?
Click to expand...

If that's the configuration you want, I suggest you check out the setup here:

And, interestingly, this vehicle is (perhaps) for sale:

I've had no response to my inquiring e-mail, as I assume the seller has bigger fish to fry. But this is, regardless, about the best you can do in terms of size, shape and equipment. There's about a zillion dollars and a zillion hours into this thing. In any event, reading through all of what Bill Swails wrote would give you an excellent education in camper design and systems.

Incidentally, this picture shows the size of passthrough manageable with this type of setup: 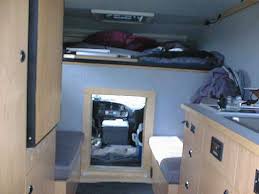 Check out sarconcepts build blog of the Bullet. See Post #257, I asked about some details which may help you out.

He does what you are talking about but only with the rear window. It shouldn't be hard to imagine the cutout being a different size/shape. I have spent a fair bit of time thinking about this myself, the big thing holding me back is making a "un-reversible" modification to my truck, which I still need as a truck from time to time...

Really good info! Thanks for sharing. Anyone else had experience with the pass throughs?

We have a pass through on our unimog, it's behind the drivers seat, and is from the top to the bottom of ther cab

Oops, let me continue. It's about 2 feet wide and has a swinging lockable door. We cannot use it while driving, but often use only the pass through if we stop for just 1 night, or if its raining outside. Ours uses some heavy canvas fastened to both the truck cab and camper body, and it has a enough slack to allow for all the flex we have demanded of it. The bellows type rubber would look a better.

You might want to check out a CUCV M1010 setup. It used a 9' long box with a cab pass thru and the box had its own sliding door to close the cab from the box.

Box after gutting it 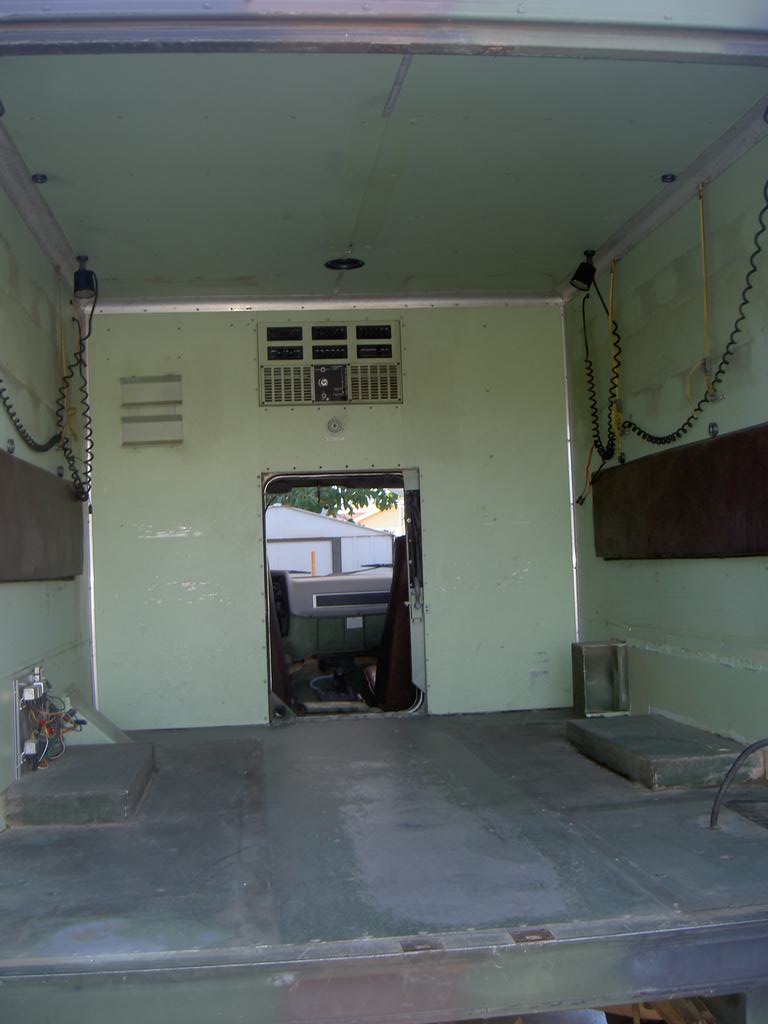 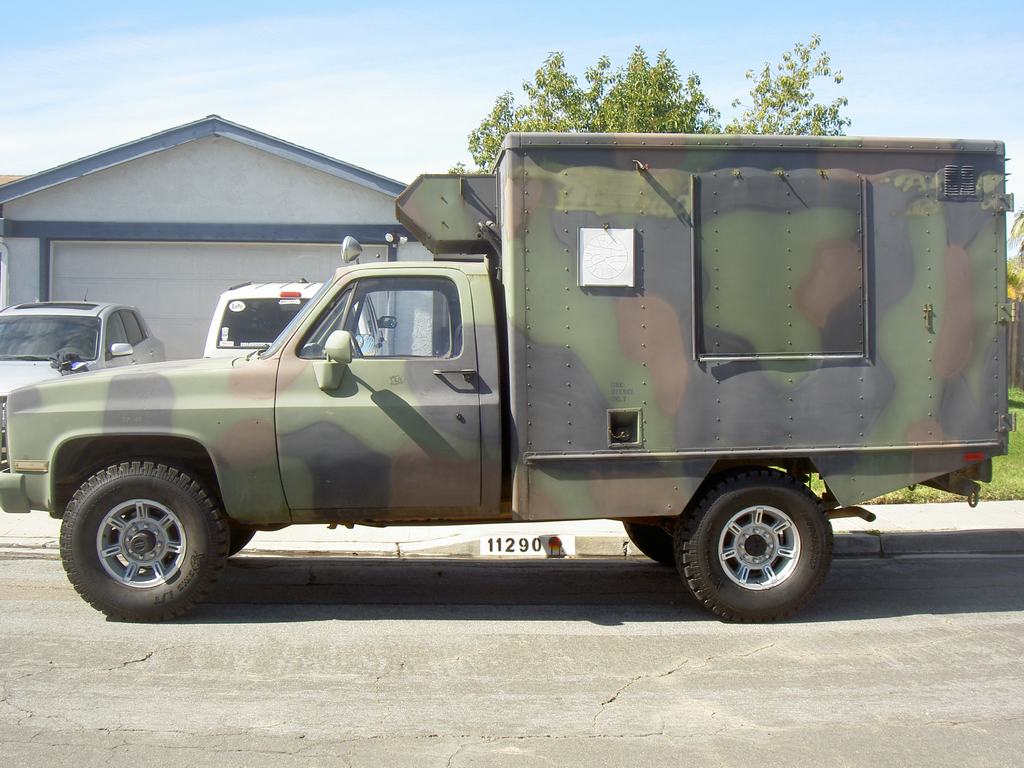 Size comparision to the '97 Dodge Ram with FWC setup I bought to use, selling the M1010. 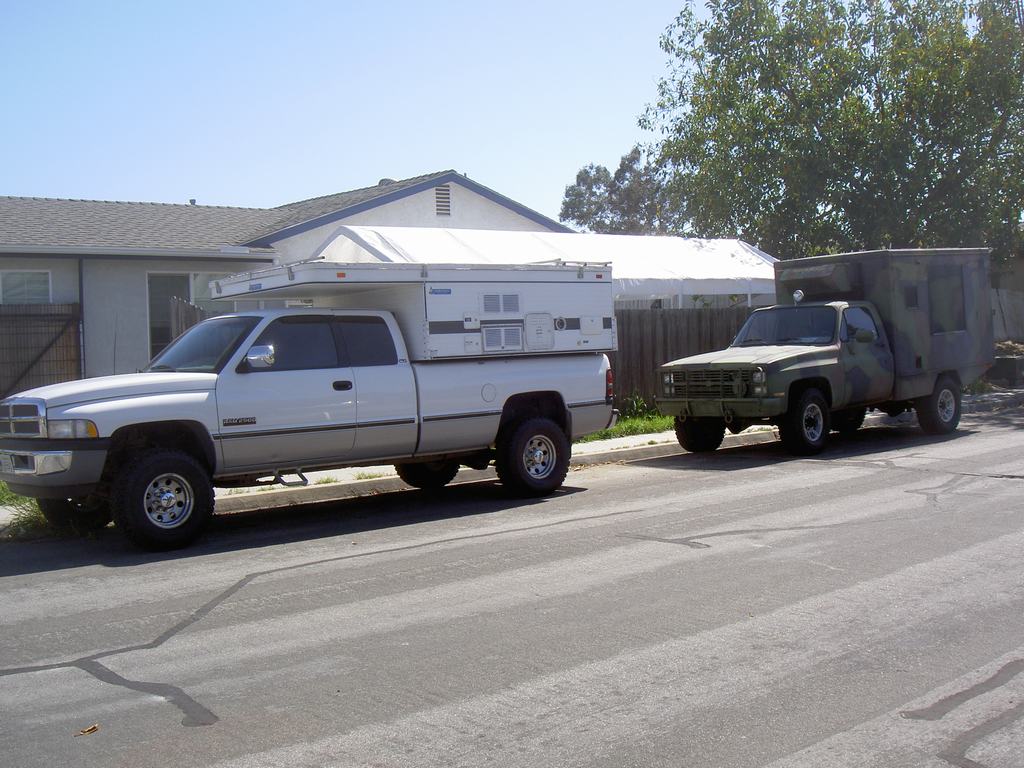 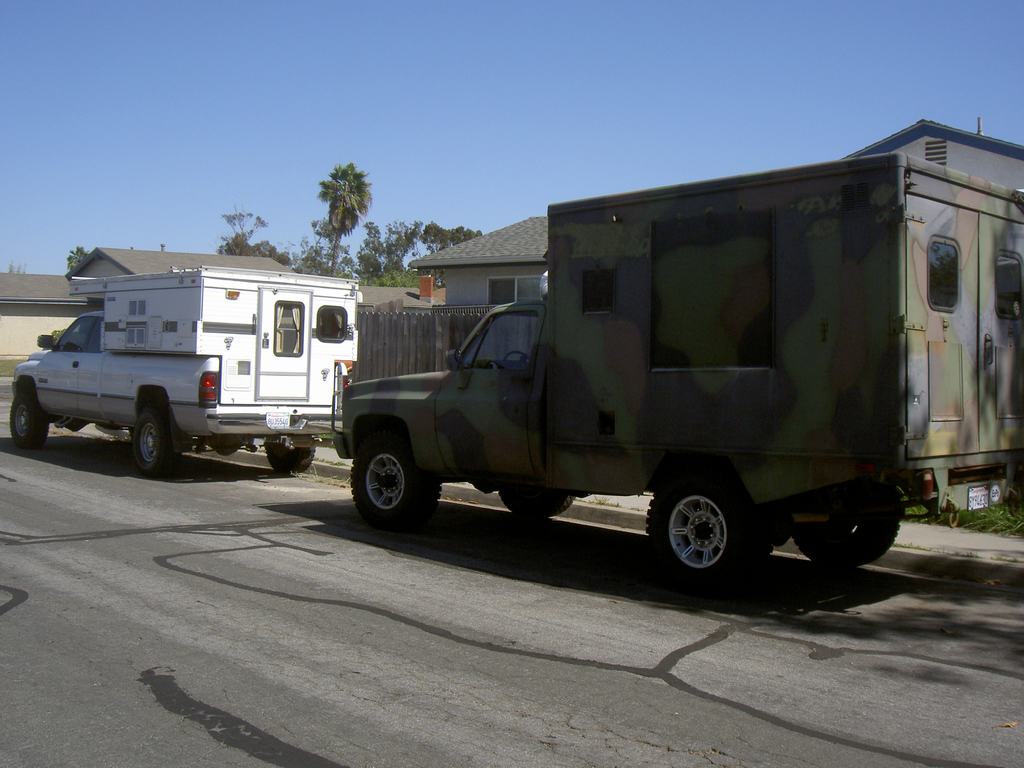 I really wish I had had the space and time to build up the M1010 as it could have been an awesome build.

Ok, Got some photos done. 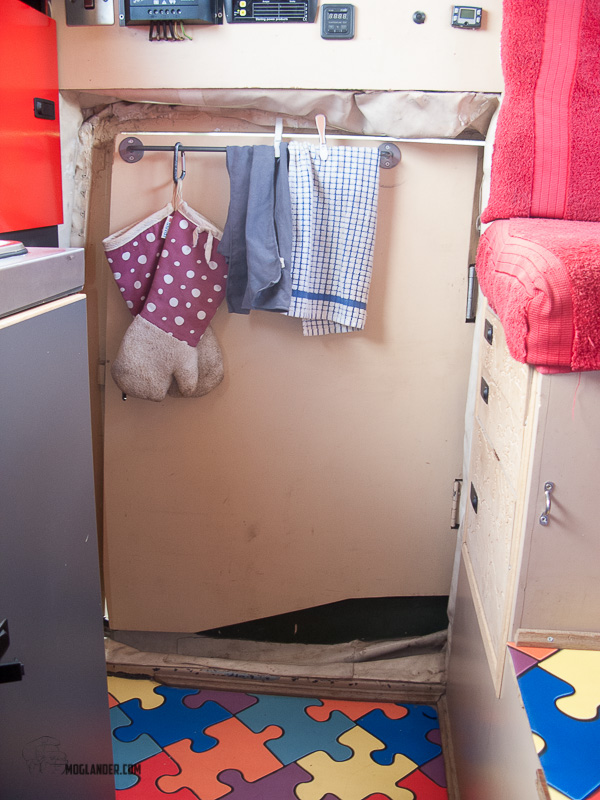 Door closed, seen from the camper side 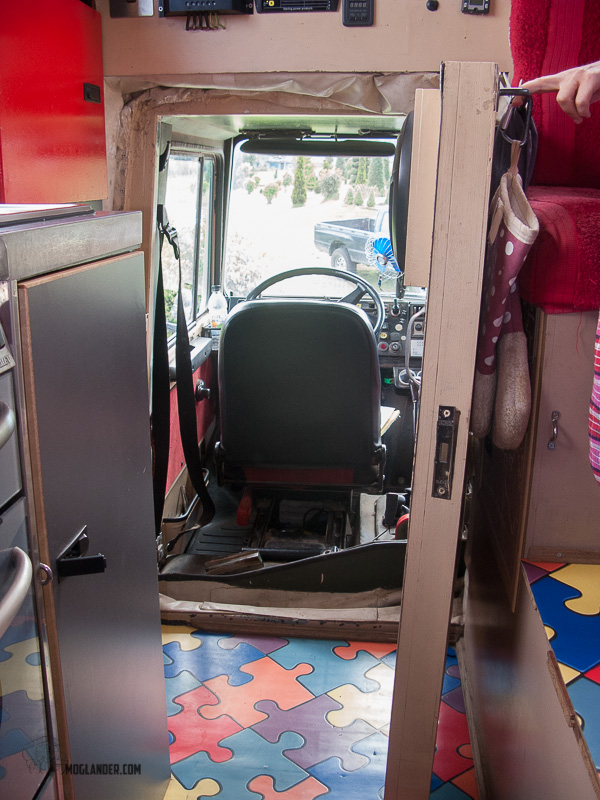 Door open, taken from the same point of view.

How Good an Idea?

For us, a pass through was essential. Is it hard? No, Provan, Earthroamer, and others have been doing it for years. Bengal Tigers have the cab rigidly mounted to the camper; in decades of construction, they have never had one fail. The Malayan Tiger uses a three point mount and a diaphragm between the cab and camper. As the link is well under the cabover, weatherproofing is not a big issue.

Why do it? Well, it rains sometimes. As a practical matter, getting from the seats of a pickup into a camper requires some gymnastics. And some thought and practice. That said, I am over 60 and over six feet and can do it with ease. Do I do it all the time? No. Most of the time it is easier to walk around.

Part of the problem is that many U.S. pickups. including my Chevrolet, have large consoles between the two front seats. You can, of course, remove them, but then you are often left with a big engine computer and sometimes a subwoofer. So you may end up building a carpeted box to cover all of this. I wound it easier to simply leave the console in place, especially as it has USB and 12v ports.

I have not done it yet, but a shipping security barrier can be as simple as a sheet of metal and some wing nuts. You could also mount grooved tracks.

Sorry I don't have a good back to front photo, but this will give you a feeling.