Concealed Carry - What Have You Got?

If concealed, its a true CC rig. LCP380 with a shoot-thru holster with Federal HST's.
Front pocket carry, back pocket carry, doesn't matter. Prints like a wallet. 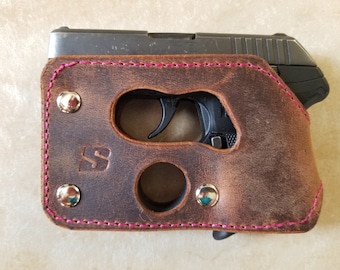 IdaSHO said:
If concealed, its a true CC rig. LCP380 with a shoot-thru holster with Federal HST's.
Front pocket carry, back pocket carry, doesn't matter. Prints like a wallet.

That's an interesting looking set-up but it looks awkward as hell to shoot well with it. I like Bob Mika's pocket holsters and have used them for a Beretta 950BS and, now, an LCP. Unless I'm in the back country, I don't open carry but I do carry concealed with a paddle holster if I'm carrying something like my Kimber Compact CDP.

Its actually more comfortable for me to shoot with the holster than without, as I use the forward portion of the holster as a grip for my other hand.

It also adds weight to the forward portion of the gun. Small gun, but packs a punch. A bit of weight out front helps keeps things on target.

IdaSHO said:
Its actually more comfortable for me to shoot with the holster than without,
Click to expand...

I was thinking that when I saw your pic. I'm an ape and my hands BARELY can manage a Glock 43 but in a shoot-thru holster like that, smaller might work

Yeah, and for such a small gun, it is quite a handful to fire. The wife hates the little thing.
Packs one hell of a punch for being so small. But lack of heft is much to do with it.

I like it because it is a true CC rig. Small enough that you can actually CC it without any BS, so it actually goes with me.

As they say about a lot of things, the best ***** available, is the one with you. And the LCP380 goes anywhere without a fuss.

Unlike (unfortunately) many of the rigs mentioned in this thread, that required special body holsters, IWB holsters, etc.
Ive tried many of them, and at the end of the day there was simply too much fuss, and/or they were uncomfortable.
Put those two together and you have a firearm that most likely gets left home....

Glock 45 (9mm), or Glock 48 in a GCode IWB holster, extra mag carrier, ZT clip on, and a surefire 6p for the stuff that bumps around in the dark. Also what I shoot IDPA with.

KelTec PF9 in a pocket holster. Like the LCP380 it's small enough to print like a wallet but has a bit more punch than the 380. However, being mostly polymer, it's tough to keep on target for the second round if firing quickly so make the 1st one count.
D

If I’m doing it right you will never know

Depends what I am wearing and where I am going, my rotation includes:

Each gun fits a particular need I have, for instance the EB would never work in light shorts and t-shirt around house or beach, and Keltec would be wasted with heavier clothing/more layers.
K

Depends what I'm doing.... Usually a P220R carry with a bunch of custom work. Proctor Y notch sights, a custom trigger, and cut down slide release and decocker levers.

I've actually got way too many guns and need to start selling them. Gunbroker, I guess.

Deep Survival: Who Lives, Who Dies, and Why
by Laurence Gonzales
From $9.99
S

XDs .45, appendix IWB with a Sticky holster most of the time.
M