Ty and Jody break out of camp first and hit the road for their ride home. The three of us from the Colorado crew take off next and Don hangs back to call home since we had service. Don ended up staying out an extra day to camp one more night on the way home and by the sounds of it found a great spot we might have to revisit later.

I’ve handed back the lead to Bill to get us back to Colorado. The plan is to drive back to Bluff and work our way to Hovenweep National monument and take the back way to Cortez Colorado. It’s all country two-lane roads from where we left Hwy 191 until we get back to Cortez. 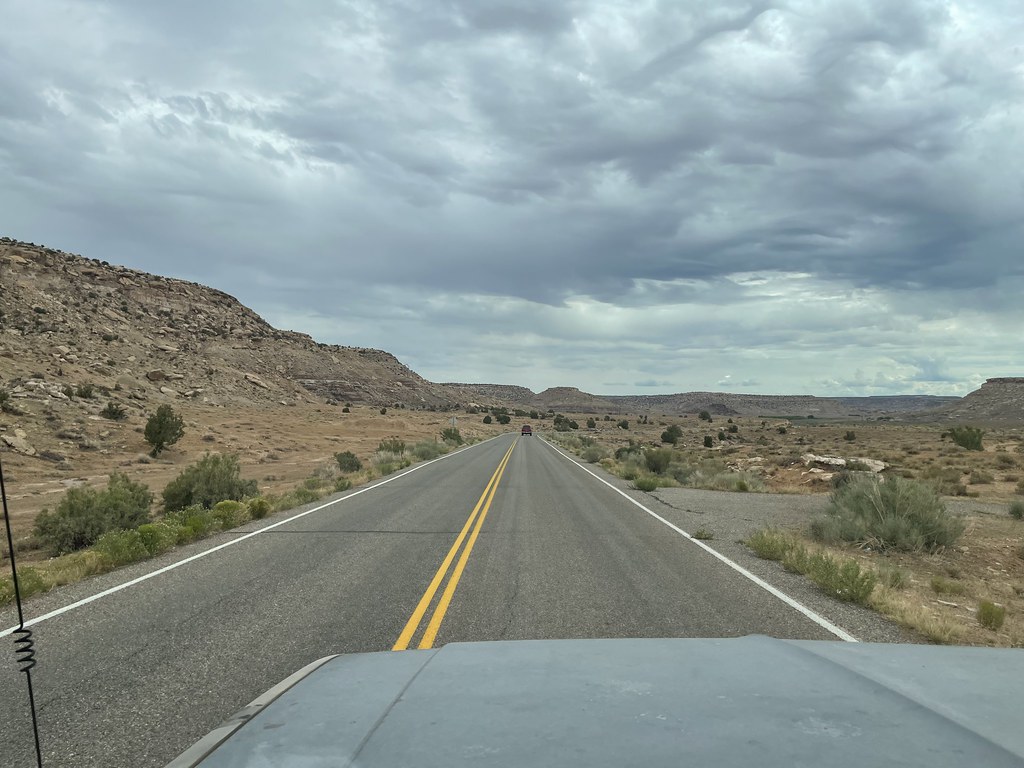 The landscape is dry desert and we cross the boarder into our home state and we start seeing a lot more green. There must be a creek around for irrigation as there is active farming going on in this area. We make our way into the town of Cortez and decide it’s a good time to stop for lunch. A local spot was targeted but proved to be too busy to deal with the wait so we hit the Sonic in town and scarf down some burgers. 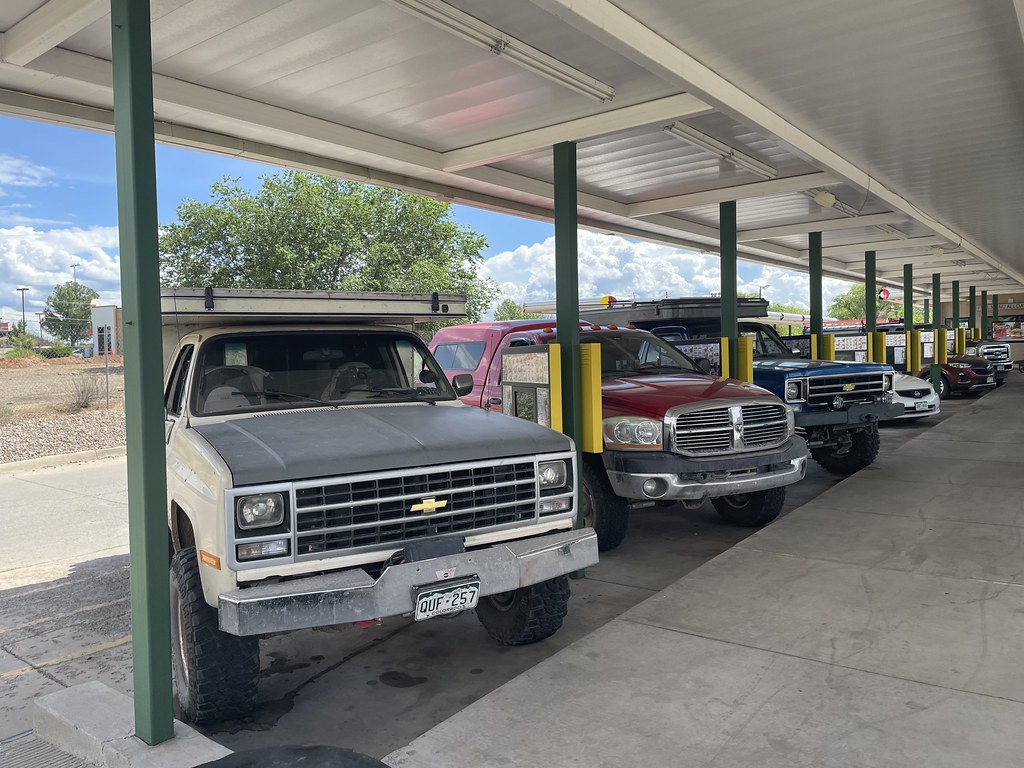 From this point forward we are in a mode of pounding out miles. We hit our first patch of rain before rolling into Durango. It would be what we deal with off and on all day. Just waves of it. During a dry patch east of Durango we make what should be our last fuel stop. Gas and snack bought it’s now time to get over Wolf Creek Pass. The rain comes back during the climb up and over the summit. It made taking pictures along the way worthless to do for sure. On the downhill swing we carry some momentum into the San Luis valley.

I had reviewed the map earlier and could see my turn to split from the group was coming up in Del Norte. As much as I like riding together, turning now is going to cut off time and miles to my ride home. We find a spot to turn off and I gave Larry back his extra radio. Goodbyes are said and we head off in our separate directions.

Larry and Bill ride across the valley to La Veta pass and hit interstate back to Pueblo. My ride has me running up what the locals call the “gunbarrel” as the road is dead straight for miles. Rain continues and as I climb Poncha Pass I notice piles of small hail on the shoulders of the road near the top. I’ll add the temps have dropped considerably but running with bare feet and sandals and both kick panel vents open I’m now freezing in a truck I was baking in the days before. I decide to stop in Buena Vista for a pit stop and top off fuel with what was in my jerry cans and some different snacks. Oh and I closed the kick panel vents and turned the heater on full blast to warm up.

One thing I noticed getting into Buena Vista was the traffic going the other way. It’s a Friday before the three day weekend for the 4th of July. Everybody from Denver was coming in on Hwy 285 to play in the mountains. It was madness. Jeeps, Trucks, Campers and trailers chock full of toys. The further northeast I run, the heavier the traffic is coming the other way. It looked horrible if you were going that way. 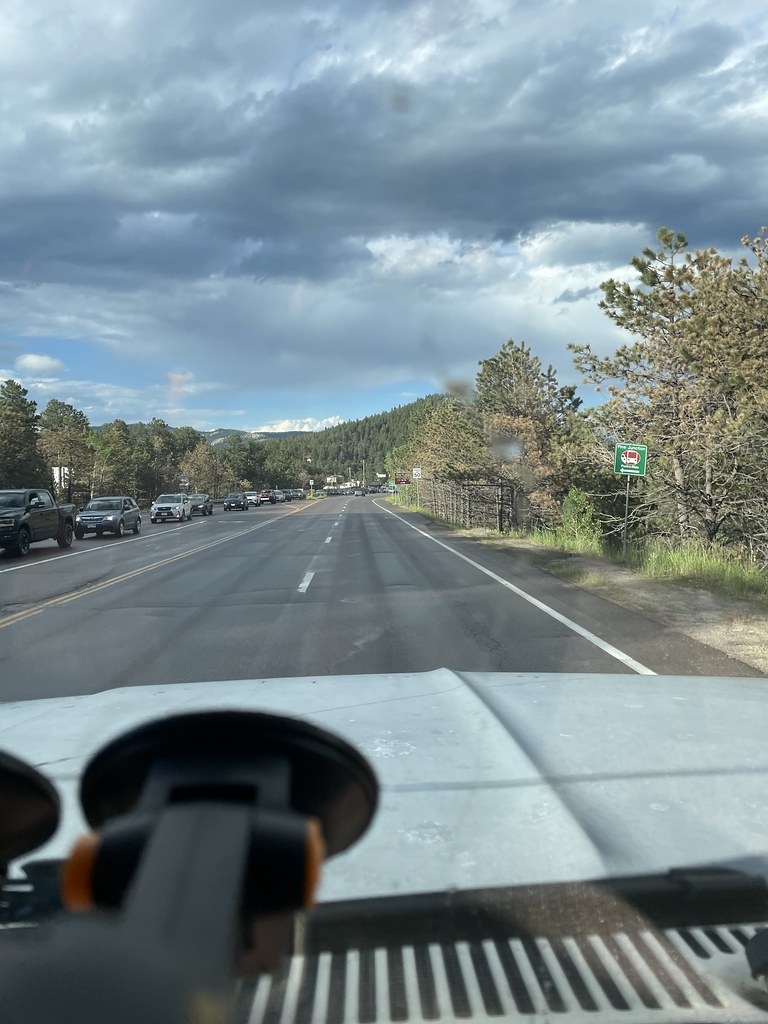 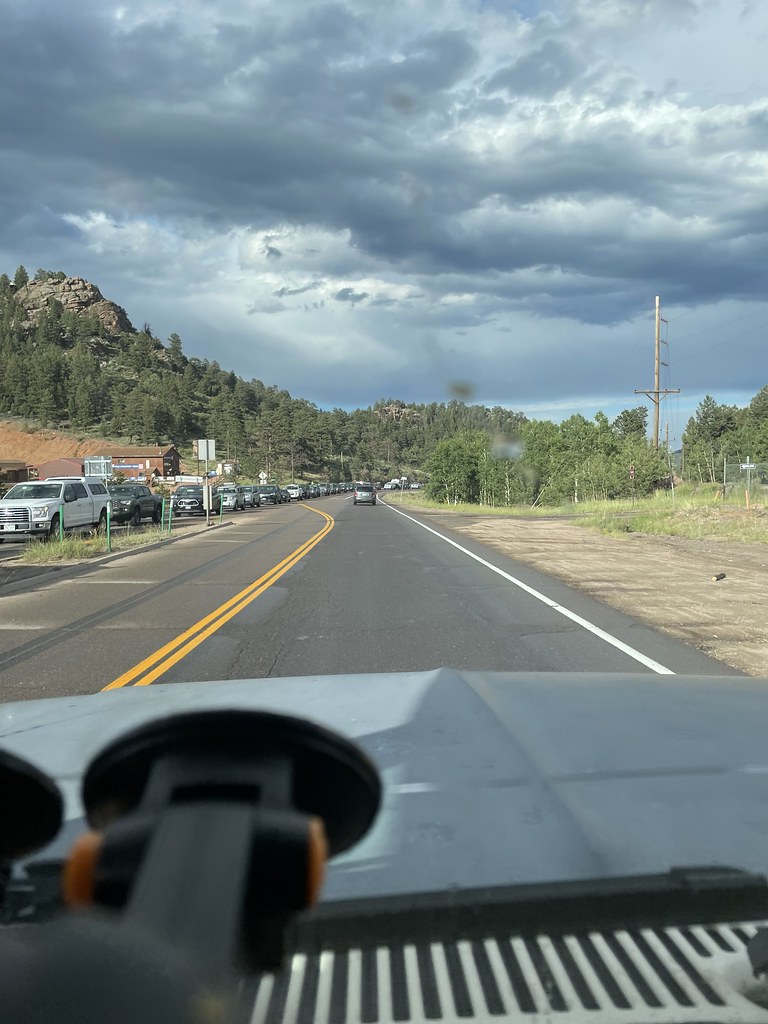 Thankfully, the direction I’m going in is free of heavy traffic and it’s mostly downhill. I got home about 45 minutes after Larry texted me he had got home.

Recapping stats, my mileage traveled was 1,404 miles total round trip. Fuel economy came in with a high at 17mpg and a low of 8mpg. I was pretty happy about that.

Larry’s Spot tracking of the trip:

Zoomed in on Hanksville: 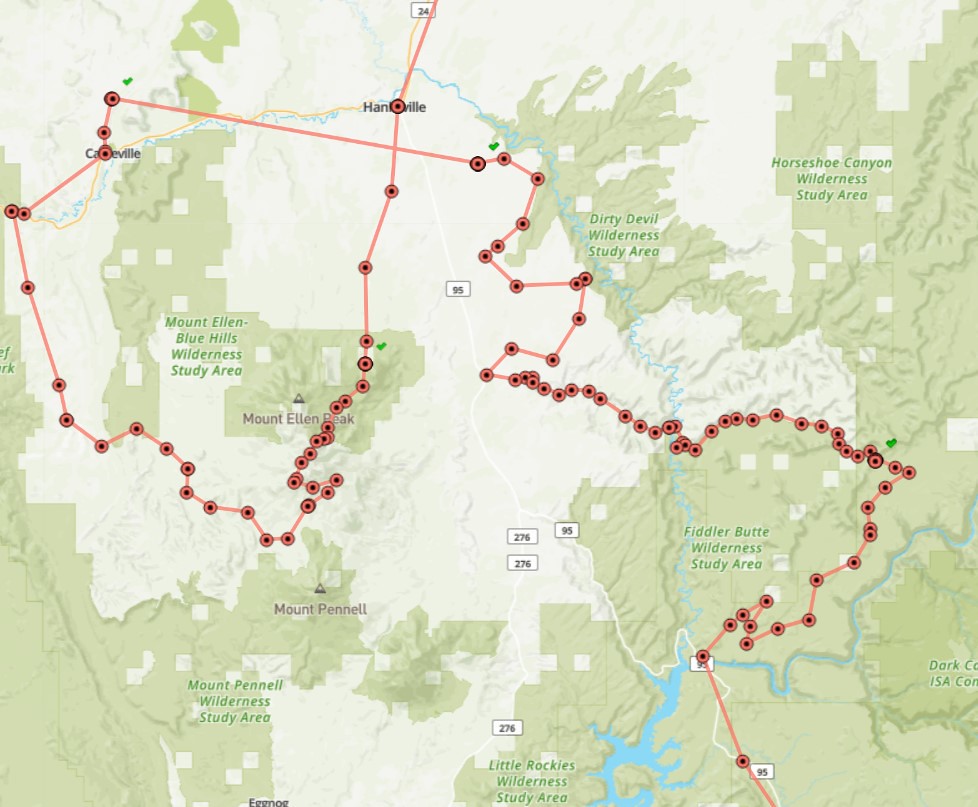 Outside of my exhaust donut failure, there were no other mechanical issues with any of the trucks. The trip itself was a great success. The loose trip plan works. Everybody had some input and we all enjoyed the different scenery that the area around Hanksville provides. Zero trail traffic reinforces the time of year we go as it’s a natural deterrent to most sane people to avoid the desert in the heat. We are not sane.

What this trip really lacked was any technical wheeling. That’s ok. We all like some slow going 4low action as much as the next guy. But the trails we ended up on didn’t have the technical sections to do so. It has a lot to do with the lack of carnage, but since we drive these trucks to and from the target area not having to arrange a rescue mission with a trailer is ok.

Trips like these reinforce my love for travel like this. I’ve said it before; the best view is from the windshield of a squarebody. Well, the view out of the camper when parked usually isn’t bad either. It’s worth saying to use these trucks and explore our public lands even if your truck isn’t perfect or finished. Mine sure isn’t. I still lack a/c and it’s pretty obvious when I see triple digit temps on my outside temp display. There are other things the truck lacks that I plan on adding, but they won’t stop me from using it in the form it’s in right now.

As far as the expense of fuel right now, if you look at it from a different perspective it’s not as bad as you might think. Compared to round trip airfare to some place to take a vacation, plus hotels, rental car, going out to eat and entertainment we are probably still money ahead. We didn’t have any hotel bills; we brought all our own food and drink locally at home, which saves a good bit of money itself.

Thanks to everybody that followed along this far. Part of the fun is getting to share it with you all.

Great TR Rob. Good advice about getting out there with what you have, especially with the route you planned out this year. And yes, July in the desert is a bit insane for anyone other than a true desert rat.

Awesome journey! Thanks for sharing.
B

That was awesome. Thanks for sharing the write up.
I was in the same area a year earlier, except it was the first week of May. I plan to go back so I’m interested in your timing. The drawback of early May was that it was cold at night and windy during the day. I wouldn’t call it crowded, but we didn’t have the place to ourselves, for sure.
How high were the daytime temperatures? I don’t mind some heat. It would be nice to beat the monsoon season though.

BLand Cruiser said:
That was awesome. Thanks for sharing the write up.
I was in the same area a year earlier, except it was the first week of May. I plan to go back so I’m interested in your timing. The drawback of early May was that it was cold at night and windy during the day. I wouldn’t call it crowded, but we didn’t have the place to ourselves, for sure.
How high were the daytime temperatures? I don’t mind some heat. It would be nice to beat the monsoon season though.
Click to expand...

Thanks for the kind words. At camp on night one it was in the low 70's when we stopped. We were at 6,800 feet of elevation up there though. At night it got cool, but not cool enough to require firing up the furnace in my camper. The rest of the days at lower elevation ranged from mid 90's and up. At one point near Goblin Valley SP I saw 107 degrees on my outside temp gauge. After seeing that readout, I stopped looking at it.

It was probably the last night in the valley of the gods that felt the hottest after the sun went down. I had to break out my silly mini swamp cooler to get some semi-cool air flowing at me while trying to sleep.

It's a mind-over-matter deal. Have lots of fluids on hand. Stay in the shade when you can. Later in the week, the threat of rain was stronger. Which was a double-edged sword. It usually meant cooler temps but depending on where we were at, also meant we had to book it to higher ground before it hit.

Always love to read the trip reports of your gang! Thanks for taking the time to type it up and share all the photos. This is what ExPo is all about (or used to be).

I love the adventures of you and your crew. Thanks for posting that

Great trip report! Thanks for sharing!

Thanks all. Larry and I both have some video clips from sections that we will add as we get through them. I've got drone footage to go through.
M

zoomad75 said:
Thanks all. Larry and I both have some video clips from sections that we will add as we get through them. I've got drone footage to go through.
Click to expand...

Fantastic report, thanks for sharing!

Great report and photos. Thank you!

Detailed reports like this help me plan my roaming trips out west. The excellent tailgate cooking details are just a bonus!

What an epic trip! I agree that Poison Springs is the best entrance into the Maze/Orange Cliffs/Hite The crossing at dirty devil is a great spot to hang out for a few days too. Some of the best day hikes on the planet from there (not hyperbole). Thanks for sharing!

frink84 said:
Fantastic report, thanks for sharing!
Click to expand...

Detailed reports like this help me plan my roaming trips out west. The excellent tailgate cooking details are just a bonus!
Click to expand...

That area is great for exploring. Wasn’t hard/technical wheeling but ticked the box for remoteness.


DirtWhiskey said:
What an epic trip! I agree that Poison Springs is the best entrance into the Maze/Orange Cliffs/Hite The crossing at dirty devil is a great spot to hang out for a few days too. Some of the best day hikes on the planet from there (not hyperbole). Thanks for sharing!
Click to expand...

I know we didn’t scratch the surface of the area. It’s an awesome place for sure.