An advantage of foam also. Plus, if the fire spreads to the wildland foam will be much more effective than anything else. Also I can refill my own extinguishers. Most of these have fireade 2000 or similar. 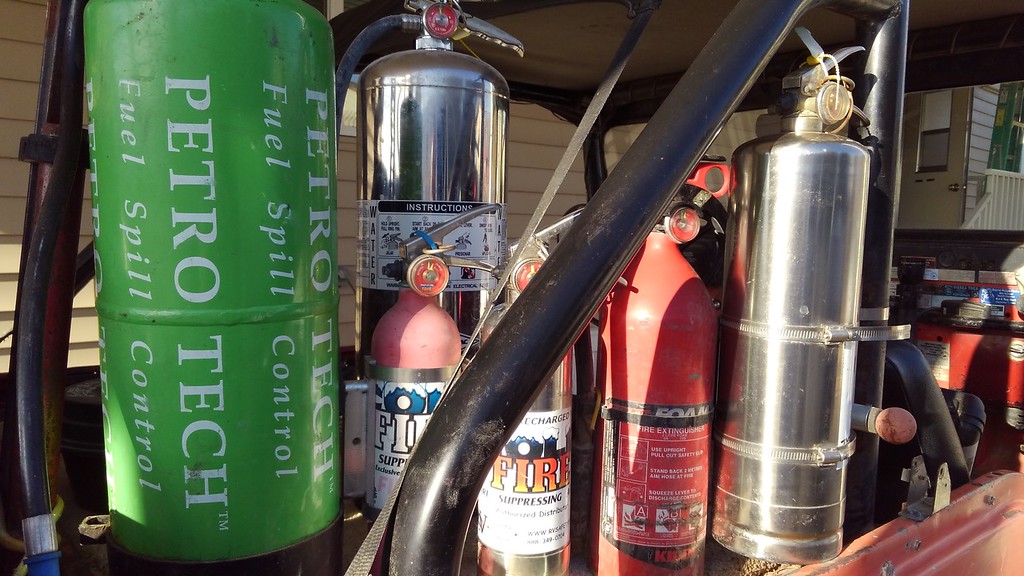 This photo hosted by SmugMug; your photos look better here.

I've never(thankfully) had to use an extinguisher on my own vehicle. I have on others though. Frankly, if the fire was on mine, it would be traded pretty quickly, so not really worried about the corrosion possibility. And neither of the two vehicles I helped put out were upset about me not having Halon at the time.

I have a Halotron extinguisher not shown, and several ABC's. Also have K-Class as well.

I should add that the last vehicle fire I put out was using a 500 gallon pumper/tanker. It went out pretty quickly...

Will likely grab a couple of the Element versions to put in our vehicles sooner or later. They have some advantages and disadvantages, like all of the others as well.

I am just happy to see people carrying ANY fire extinguisher.

nwoods said:
I really like these, and there is no missile hazard: 80% smaller & has 5x the discharge time of a traditional fire extinguisher. Makes no mess, requires no service & never expires.

Be aware also that this is probably not going to satisfy the authorities in countries where there is a volume specified in the regulations. We had three extinguishers with a total of 1.5 L volume in Zimbabwe and were fined because we did not have "a fire extinguisher with a capacity of 600 mL".

We have to carry a fire extinguisher where we live.

Photos:
1) In the Wrangler in Canada
2) In the LC80 (now sold)
3) In the Montero, at home (the second one is is a storage location - less accessible, but the primary one is easily accessible)