The bed platform is evolving. i decided on a front to back format and used a robust 2"x4" frame with 3/4" tri fold ply on top. I wrapped the tri fold in outdoor carpet to limit slip and look nice. ill take some pics when it stops raining. It ended up as a 75" x 55" (full) which is basically the least two adults need to be comfortable.

Thats usually the route i go as well. It seems to make the most sense with the way the interiors are layed out. I actually just bought my next project and will prob do another build thread. First one I found since YOU out bid me haha! Not a mini mod but 97 powerstroke, with 10k miles 4x4 with a winch! pretty stoked.

Pangle said:
Thats usually the route i go as well. It seems to make the most sense with the way the interiors are layed out. I actually just bought my next project and will prob do another build thread. First one I found since YOU out bid me haha! Not a mini mod but 97 powerstroke, with 10k miles 4x4 with a winch! pretty stoked.
Click to expand...

Wow! What a find! Wanna trade?

Pics or it didn’t happen.
E

Im headed out to AZ to pick it up next wed...

Ok...that's pretty cool! I like that both these ambos have the blue stripe. I could see them both parked at the same EMS garage. Glad you both ended up with 4wd ambos. I'm jealous.

Yeah thanks! This will be my 5th or 6th one. I love that it has the speakers in the box, and already had a winch. And yea pretty funny they are the same color!

What a score!! I’ve always loved the seat opposite bench layout. The winch is a cherry on top.

I managed to get some work done this week. My timeline for overland expo west is evanescing FAST!!

The elevated bed can be considered done at this point. I opted to go for an easy pac stow away and solid 2x4 approach. I splurged for charge ports and some dim lighting options since my “stock ambulance” inverter isn’t connected right now and solar won’t make it on the roof in tome. As of now the wife approves and my girls love it.... wheeeeuuufff!!

I watched an infomercial during A recent stent of insomnia and I happened upon these handy gadgets. It’s basically a front door security light that solar charges and requires zero maintenance, plus it’s outdoor all weather friendly.

I mounted three of them near all of the doors using the supplied 3M adhesive. Time will tell of course, but because I mounted them between the stock side floods, the wind shouldn’t affect them.

Looking good in there! Nice use of the backboard slots. I had originally used them to store some bed padding, but went w/ the fold down inner bed. That was after we were using the bed as a couch, and had to change over in a cold mountain rain/snow storm. It wasn't fun having to open the back doors, get out in the cold, chill down the rig, get wet, then get back in. Just something to think about. That's why I started thinking of running the bed across the back, and removing a cabinet.

I see a child seat installed in the rear-facing attendant seat. I thought I was fine to use it on my ambo, but I did some research and found out that no US car seats are rated for buckling into rear-facing seats or side-facing seats. Thus it's illegal in some states to install a seat against the manufacturers recommendations. The only solution is then to put the car seat in the front seat, but then you need to turn off the airbags. On the old E350s, if you turn off/disconnect one, both stop working. PITA not having the newer airbag-off switch.

California regulations:
https://www.dmv.ca.gov/portal/dmv/detail/pubs/hdbk/seatbelts
Child Restraint System and Safety Seats
Your child must be secured by either a federally-approved child passenger restraint system or a safety belt depending on their height and age.
Not to start the typical endless internet-debate on car seats, just a heads up, be safe & all that. I had no idea the seats weren't rated for side or rear-facing. I picked up some nice Ford Transit seats and was planning on removing the attendant seat and bolting the double seat into an L-track system on the floor of the ambo. Then I could flip it around when in "camp" mode.

We also wanted a little more room, so sold the ambo and picked up a Chinook.

Chinooks were initially the top choice for me, but I could t swallow the 50,000 price point for a Baja model and call me crazy, but I was diesel crazy.

Any pics on your new toy?

Ok. Another splurge has happened. I picked up a yeti goal zero lithium 1000 last night to run my fridge and lights etc. I like the ease of use element and compact nature of them. costco has some weird exclusive deal on that model and the price is almost half of the 1400 model. I’m impressed with the quality bit being a yeti, it’s overpriced and has a few obvious shortcomings like no 12v DC cig charge port and no second batt expandability, but it’ll be a plug n play starting point for under a grand.
E

It's a 2000. 2WD, V10. Drives nice. Totally gutted of anything RV behind the front seats. Probably more of a project than I really need... but seems like a fun one to build. I was going to start gutting the ambo, but couldn't bring myself to since it's so well built. 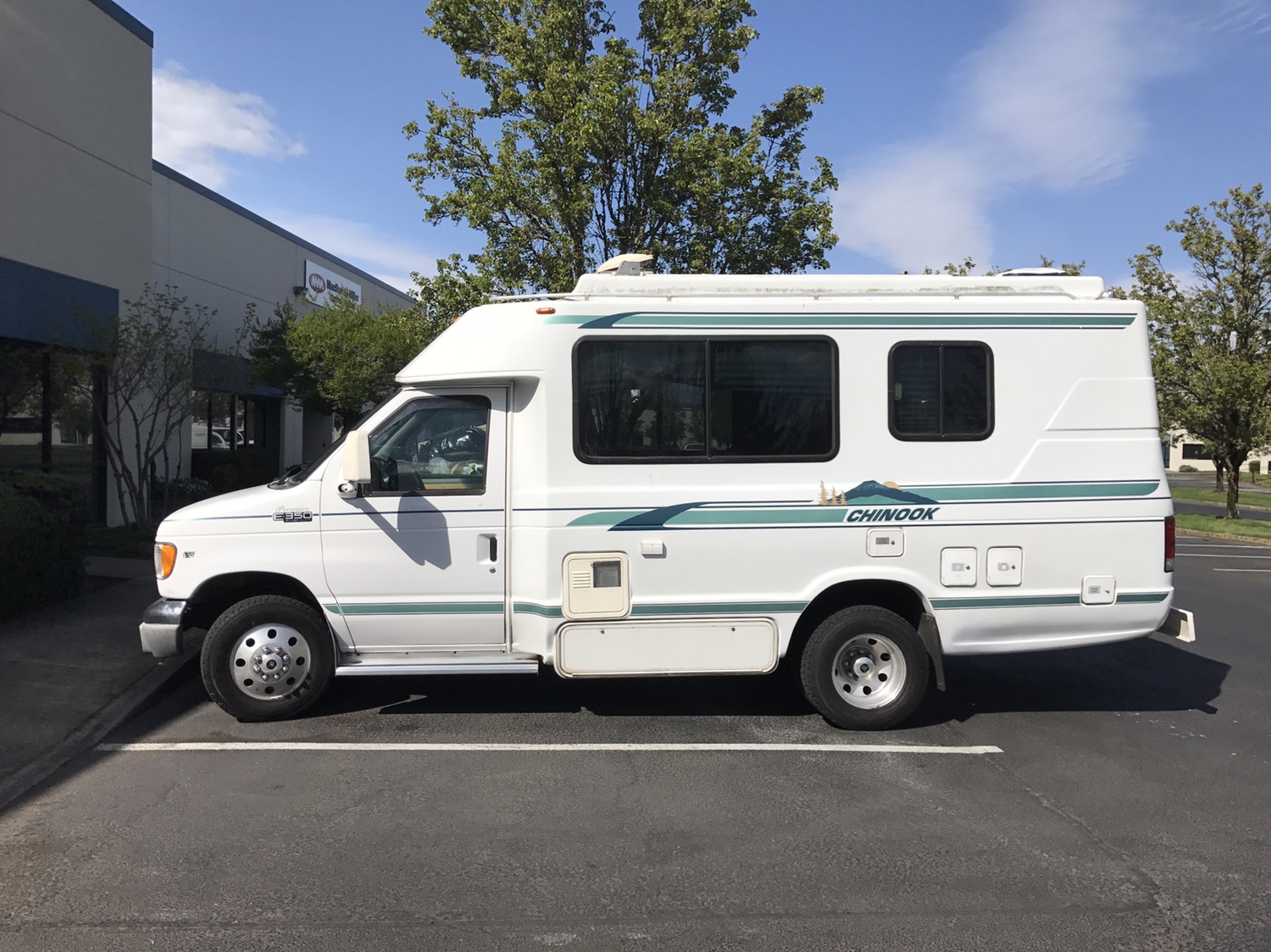 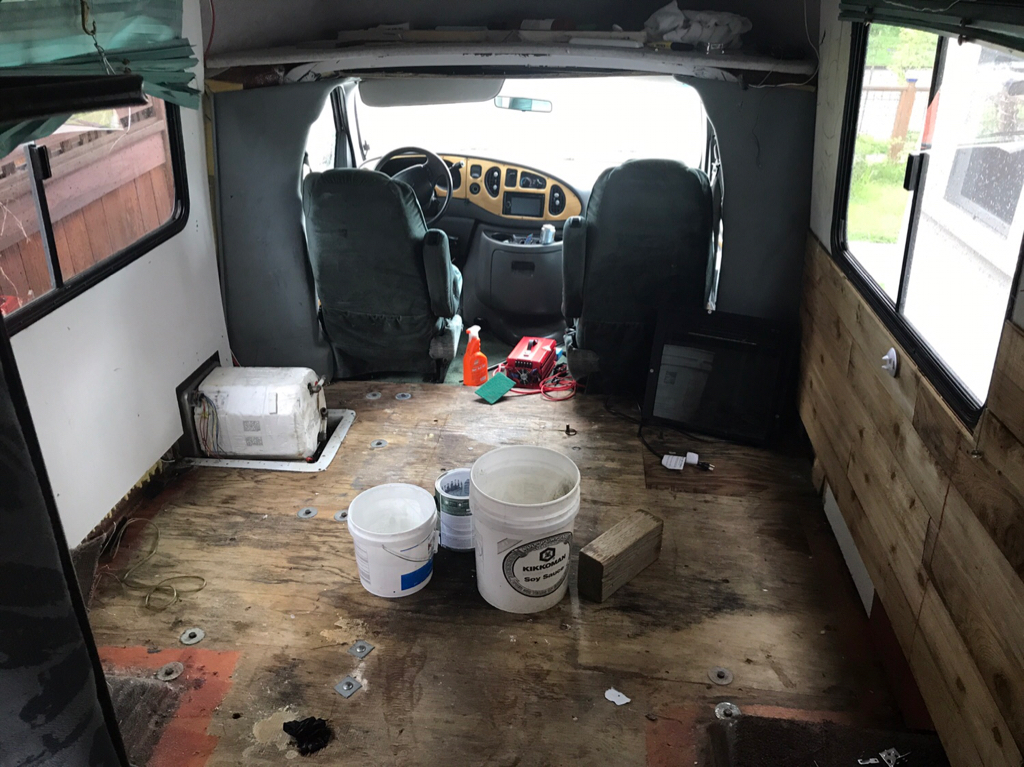