As promised, a couple more shots of what I have to play with now

As you can see, the interior is in almost showroom condition. Nothing is missing, faded, or broken.

I love having this utility track system.

And my slightly small but nearly new General Grabber AT2s.

Alright, since the truck was finally home, I decided it needed some changes. First thing to go were those running boards. Very quick job, just six bolts per side. Zip, zip, zip, and done. Looks much better.

Next, I decided I wanted to tackle the bypass mod so I didn't end up with the dreaded strawberry milkshake of death. If anyone doesn't know, it's when the trans cooler line running through the radiator cracks and the fluids mix. The transmission's seals get destroyed by the coolant, and you're out the cost of a new transmission. The quick fix is to bypass the part that goes through the radiator. It's super easy and very quick. Costs about as much as a quart of ATF. Here's what you do.

1. Jack up the truck.
2. Insert jackstand
3. Swear at how many bolts are holding that damned joke of a skidplate on
4. Start to undo said bolts.
5. Swear even more at the other bolts you just found that are holding the skid on.
6. Drop skid on your head.

Once the skid is off, here's what you'll see. We're concerned with one of the connections near the oil filter (the middle one), and the lowest one on the truck in this area going into the radiator.

Then wipe everything down, reinstall the 400 bolts holding the skidplate on, and set the truck down. The get the truck warmed up, check the ATF level, and add as needed. That is literally all there is to it. Now that I've got that out of the way, I'm not paranoid to drive my truck around! When you swap these hoses, you're isolating the radiator from the rest of the trans cooler lines, so even if it did crack it won't harm the transmission.

While I was down there, I removed part of the front air dam. It's really not necessary, it'll get ripped off on the trail, and it'll just get in the way of that tow hook. This has about a billion bolts and screws holding it together. Apparently, Nissan was really concerned about this coming off.

Feels like I've actually accomplished some work, and the truck is more "mine" now. Next thing I'm thinking about is removing the sway bars.
Last edited: Jan 22, 2015

Those are my favorite mods- the stock-ish ones. Simple yet effective. On those tires, just run them down, unless they really hamper your ability on the trail, keep them until they're worn. Plus this is an excuse to off road

Good call on removing the air Dam, never understood why they needed to put that on any 4wd, some of the new full-size trucks have a HUGE one, costing almost a foot of ground clearance in the front.

Looks good! Small tires never hurt anything. I have stock size tires on the X, but they've gotten me through everything because they're still all-terrains.

mortonm said:
Good call on removing the air Dam, never understood why they needed to put that on any 4wd, some of the new full-size trucks have a HUGE one, costing almost a foot of ground clearance in the front.
Click to expand...

Gas mileage..... Some are quickly removable. I *think* the new f150 has one that auto extends down. But I could've been reading a 911 review haha. Would be a good concept.

Here's a teaser of what I did over the weekend 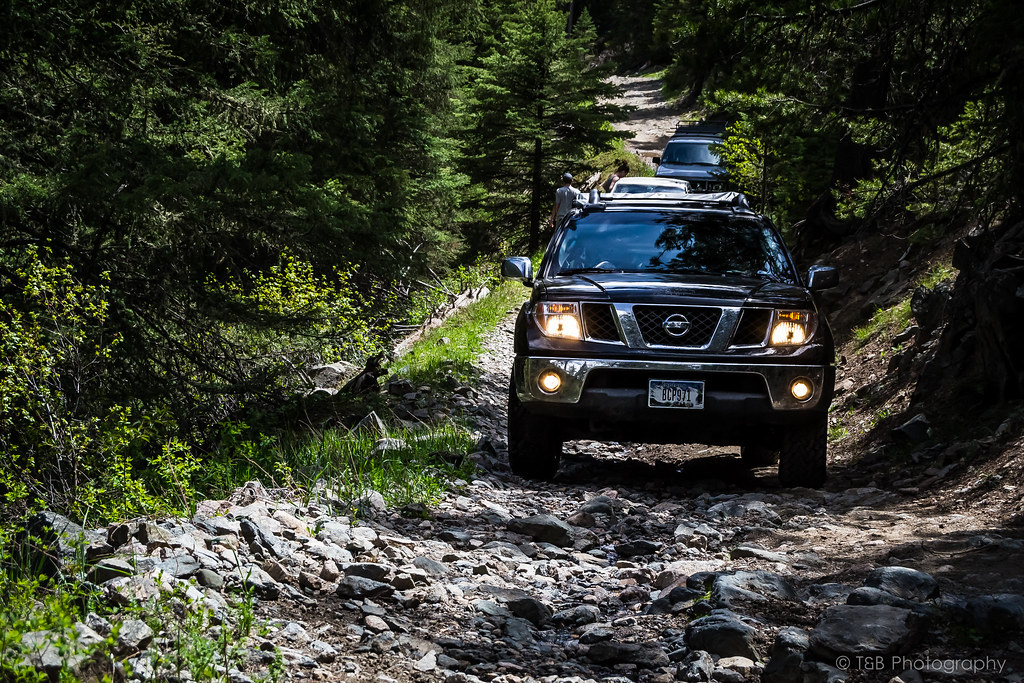 MTWheeler said:
I AM BEYOND EXCITED!!!!
Click to expand...

I love my first gen forester, but I miss my 05 cc Nismo!

So this weekend, MTWheeler, myself, and a couple other people went on a wheeling/camping trip in the mountains of south-central Montana. We had an absolute blast!

In order to prepare, the first thing I did was mount up my tent. I just swapped the whole shebang over from Nancy.

This didn't squat the rear end as much as I thought it would. The suspension seems to handle weight very well.

Just from this, I already know I want to have the tent set up on a lower rack, both for cosmetic and for aerodynamic reasons. I'm definitely going to switch over to the shorter Front Runner arms I have. I've also been bouncing around the idea of getting a set of Yakima Control Towers and crossbars and just mounting the tent to those. This would lower the tent dramatically, but it would make installation and removal of the tent a seriously quick and easy operation. The problem with this idea, though, is that I couldn't really use a toolbox and mount up the second battery inside because it would be inaccessible with the tent mounted. I do like the way it would look though. If I could rig up the second battery under the hood, I just might go this way instead. We shall see.
Last edited: Jun 9, 2014

Thanks Richard! Lola is an amazing vehicle. That locker really proved itself over the weekend.
Last edited: Jun 10, 2014

Right, so... the trip. I got together with a couple of Nissan buddies and we headed west to Big Timber, Montana. From there we headed south, past McLeod, to the Boulder River Valley. We camped out at the last campsite on the road and made plans to hit the trail the next day. What a blast we had.

The trail winds its way through the valley to the old Independence Mine, which was abandoned many years ago. At the very top, around 10,000 feet, there is a beautiful alpine lake and a couple of summits just begging to be climbed. This early in the year, we knew there would be snow, but it was definitely worth a look. Am I ever glad we did. 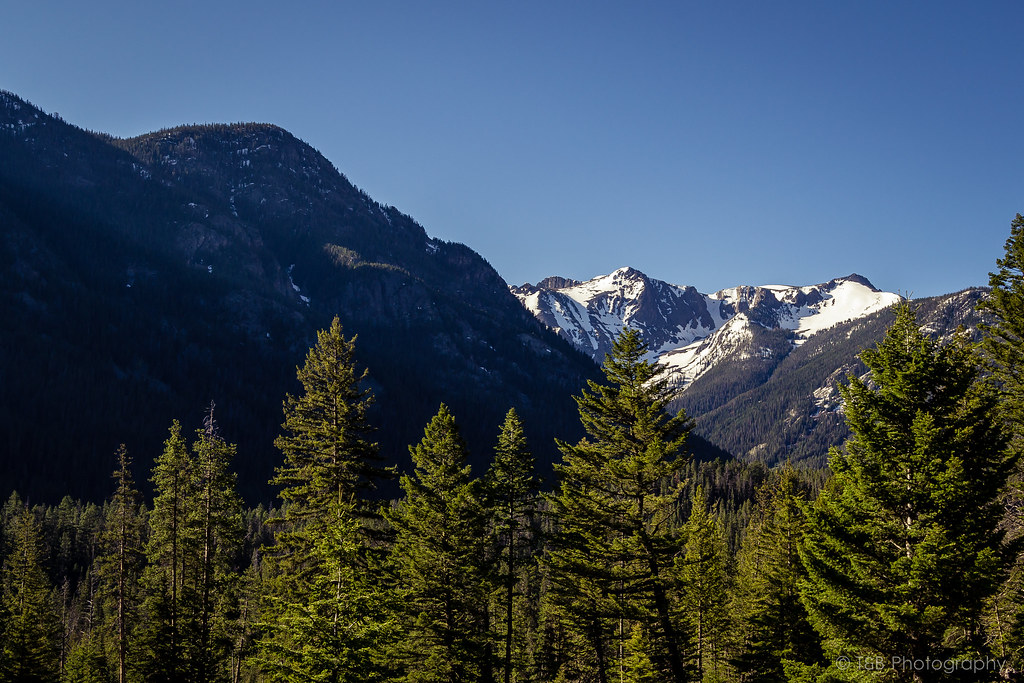 The trail starts with a bang, climbing up a rock face that also doubles as a stream during the runoff season. From there, it just gets better and better, climbing over all kinds of rocks and dropping through water crossings. 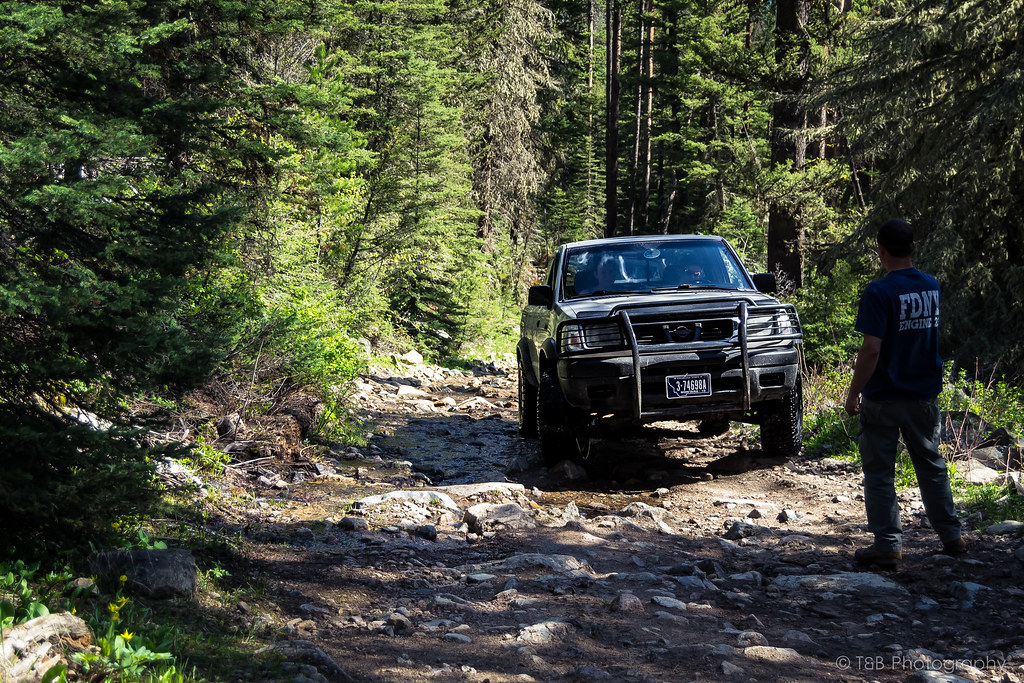 I had one of the guys (MTWheeler) spot for my fiance so she could get an idea of where to put the tires on climbs like this. 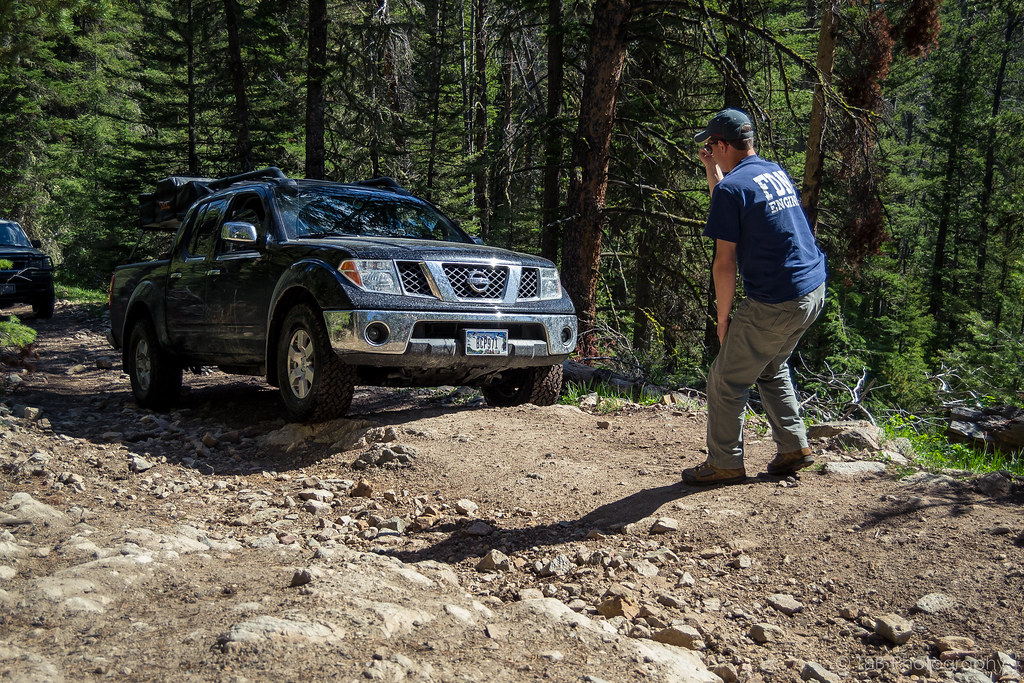 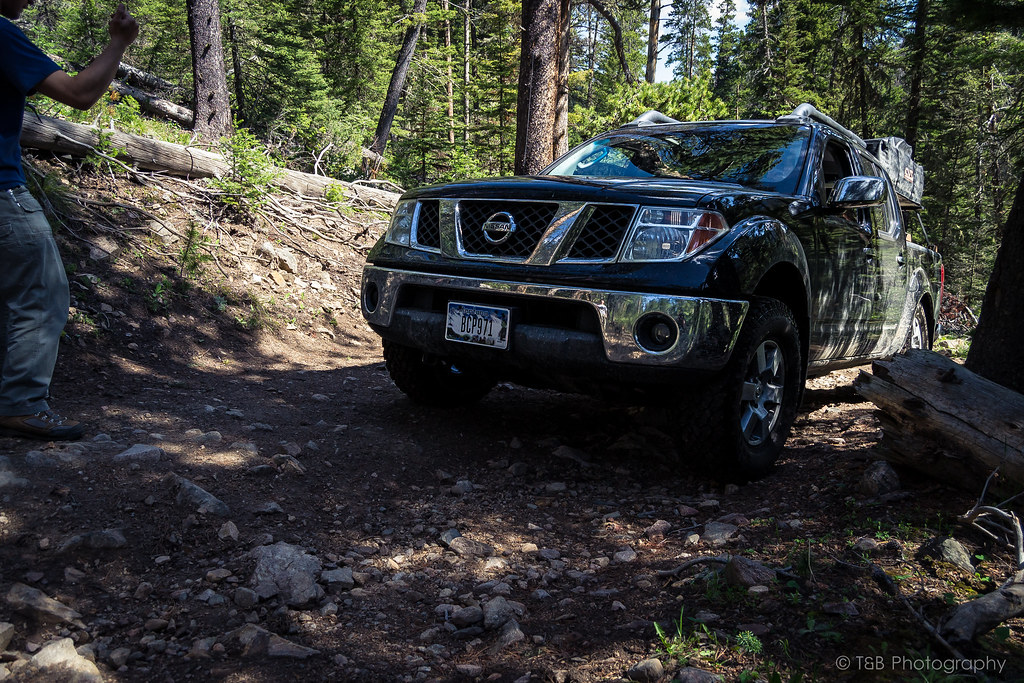 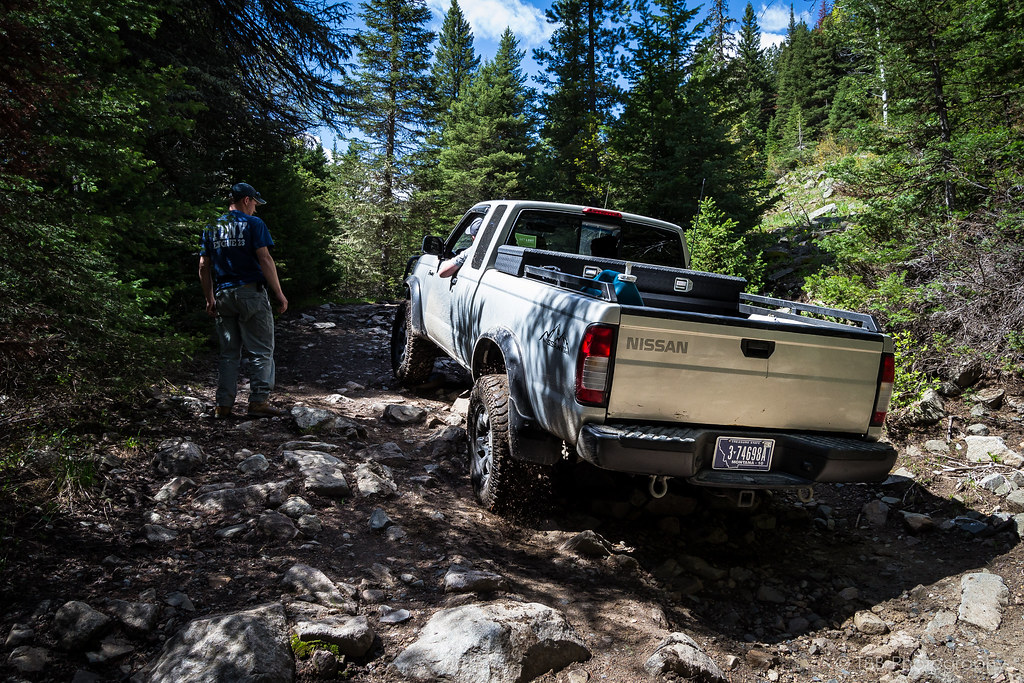 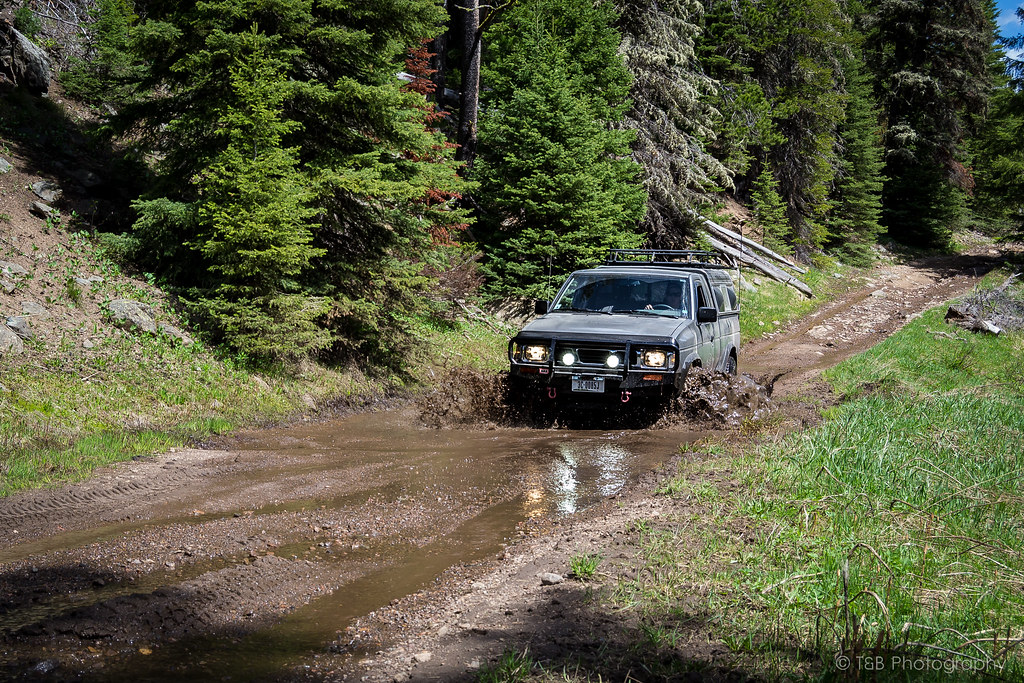 Here, the locker got the first chance to prove itself. This one obstacle, when approached just right, will pop a tire or two in the air, which will stop a truck with open diffs. 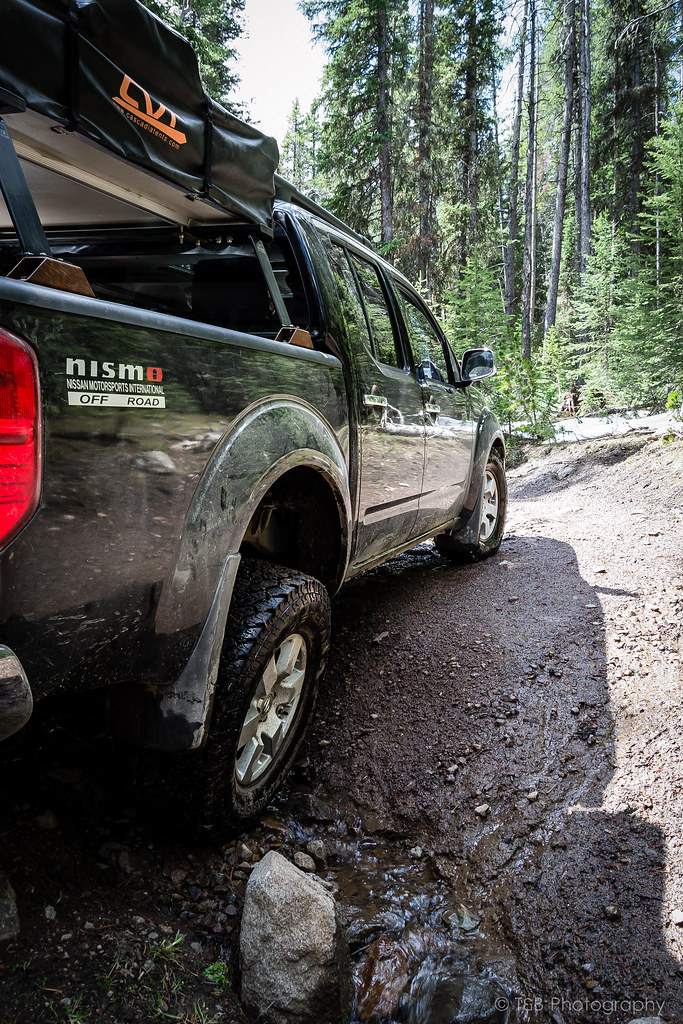 I picked a line that would lift the front tire. 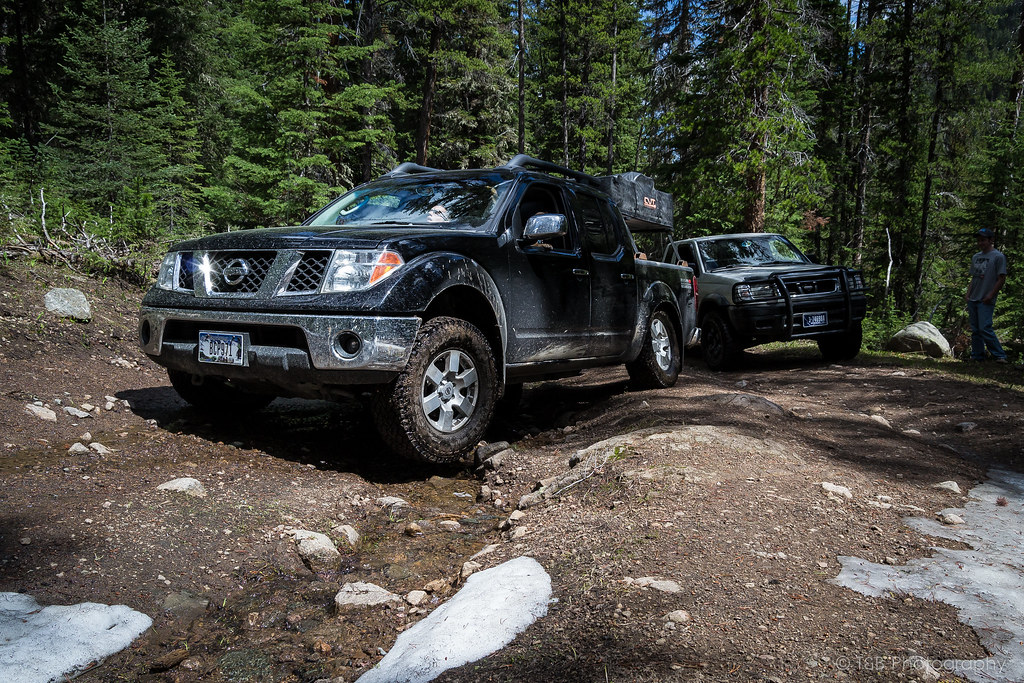 The truck just crawled right out. No fuss, no tire spin, nothing. It just kept going on its merry way, much to the annoyance of the other guys 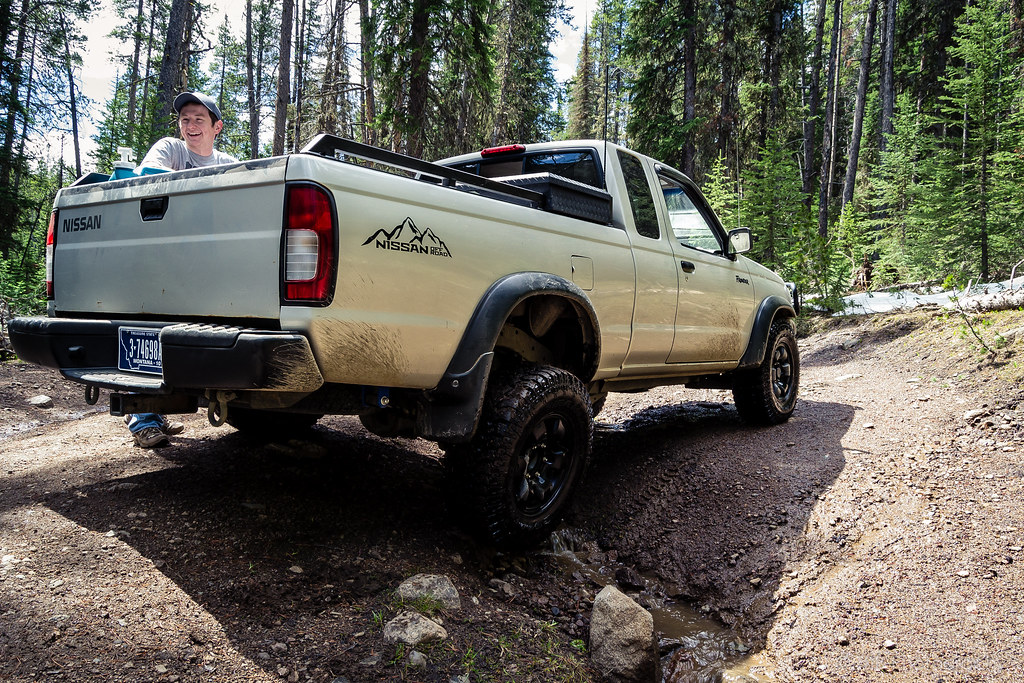 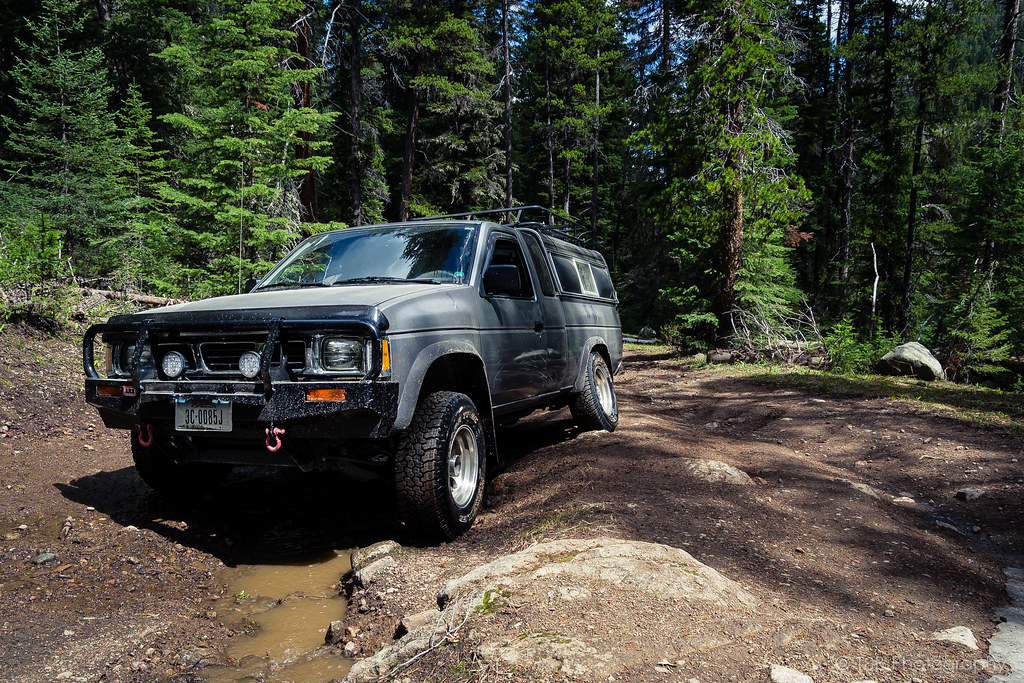 A little ways up the trail from this, we ran into an obstacle that really amped up the pucker factor. I was driving along steadily, crossing through what looked like an ordinary pile of snow, when very suddenly my front tire broke through the snow pack and fell nearly three feet into a washout. I hit the brakes and the truck was stopped, resting on the frame just below the driver's door. Uh-oh. I got out to assess the situation and we all felt absolutely positive that there was no way I would get out on my own. As we were getting ready to pull my truck out, I hopped in and put it in reverse. I was in 4-lo with the locker engaged, so I just gave it some smooth and steady throttle. Without a single tire spin or rock thrown, the truck backed right out of its little predicament. This prompted a simultaneous "no waaaaaayyyyyy!" from everyone, including me. I was really impressed. After that little incident, we set about filling the washout with rocks, packed snow, and some fallen branches. With a little steady driving and good spotting, we were able to pass the washout and pull into a nice open area for some lunch. 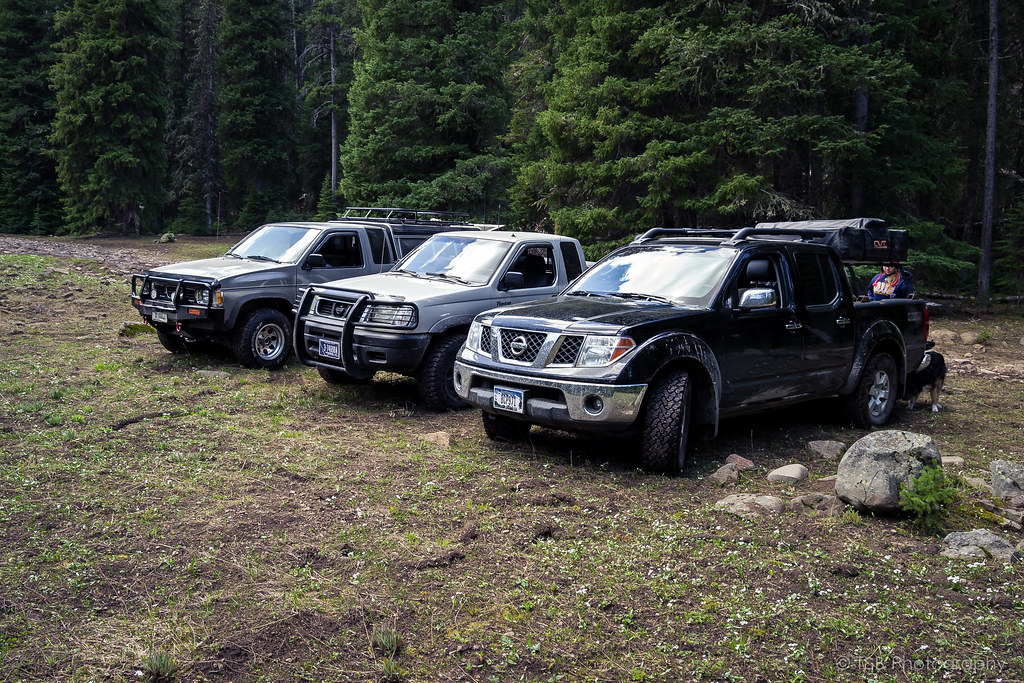 On the way back, we had to make our way back over the washout. In reality, we got really lucky going over that. It managed to hold up and we all got across it safely. 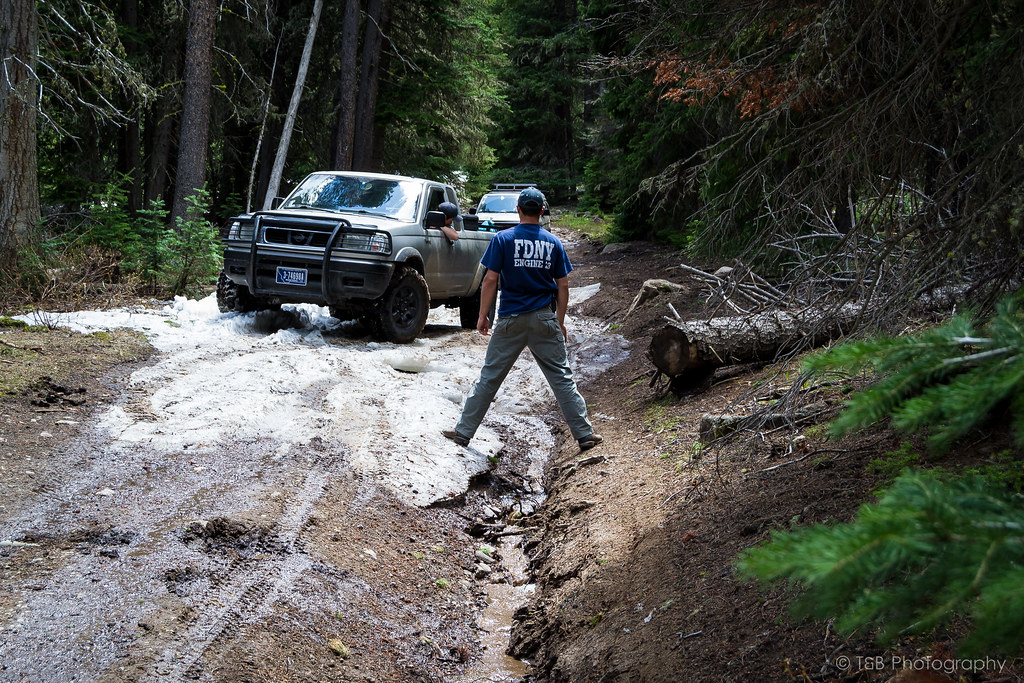 Here is the first gen driving over our little makeshift bridge over the washout. You can't really tell how narrow the solid area is, or how much of a drop off there is on the side, but my truck is only just barely narrow enough to get across. 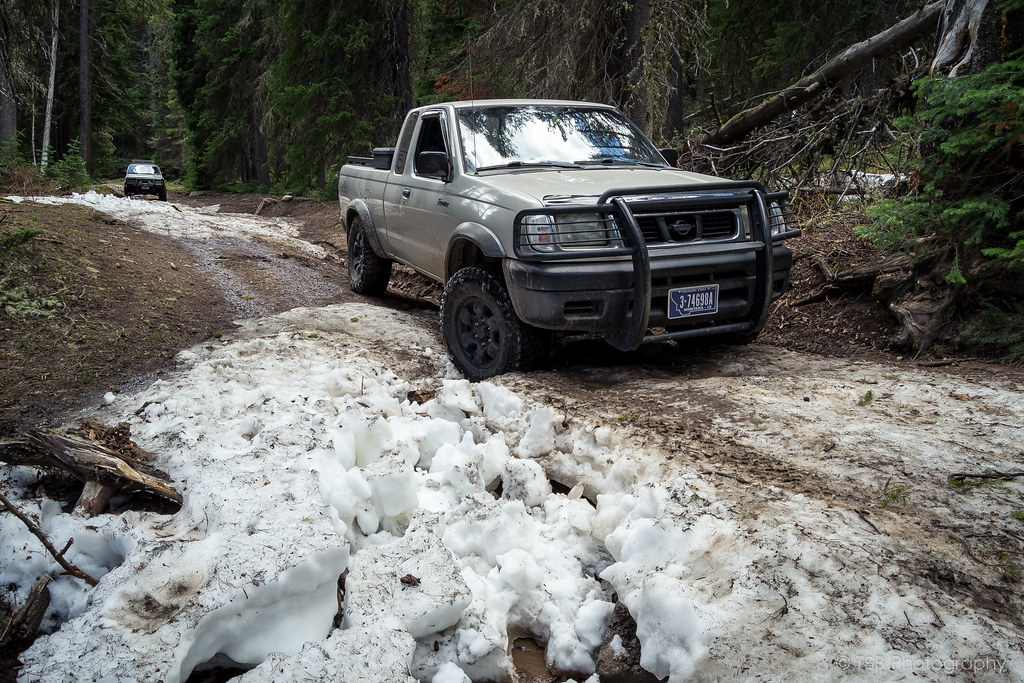 Here is MTWheeler proudly posing for a shot of his Hardbody fully flexed out. 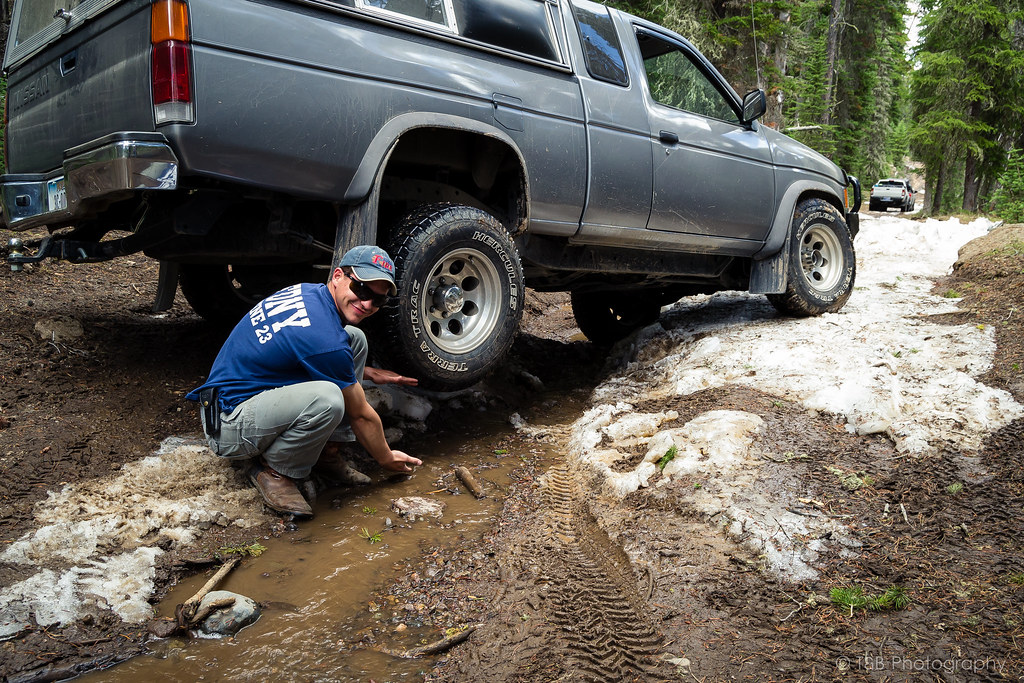 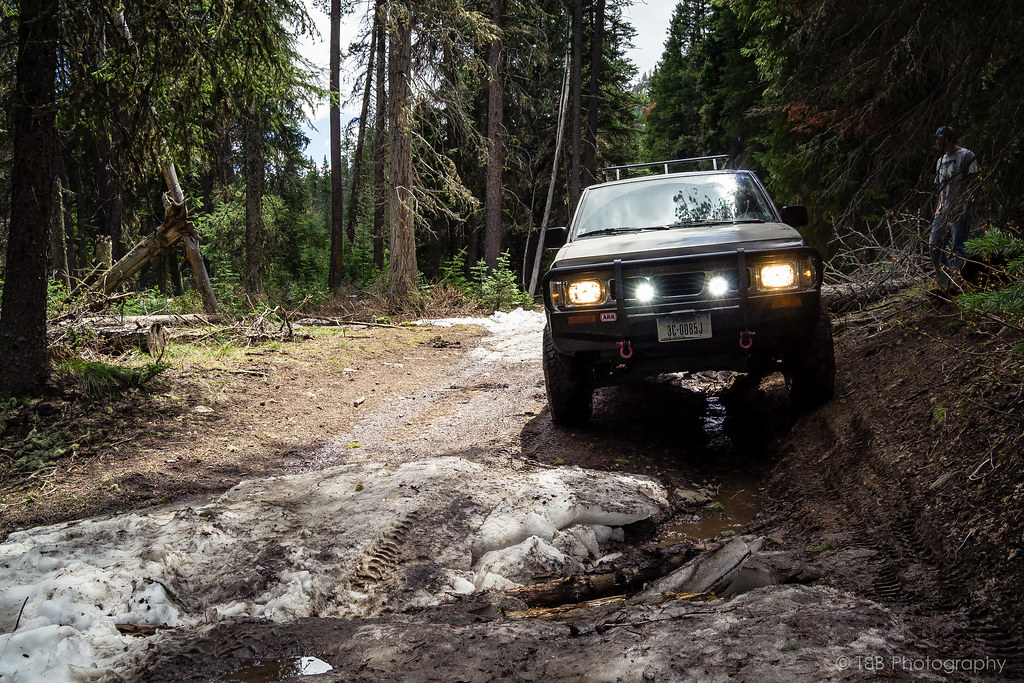 I think Lola looks right at home on a trail. 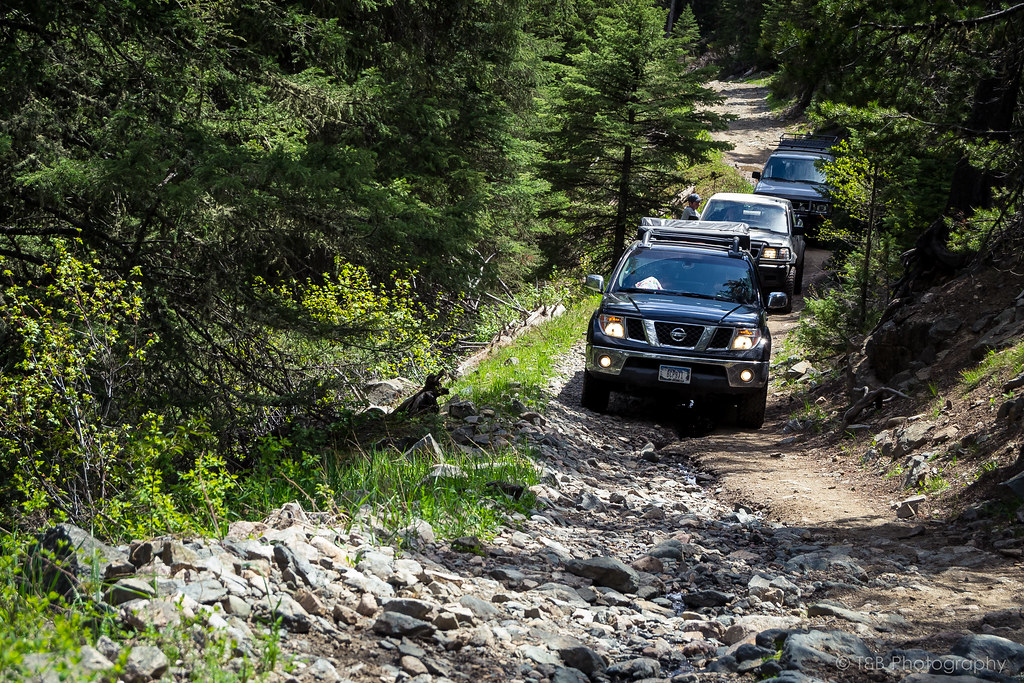 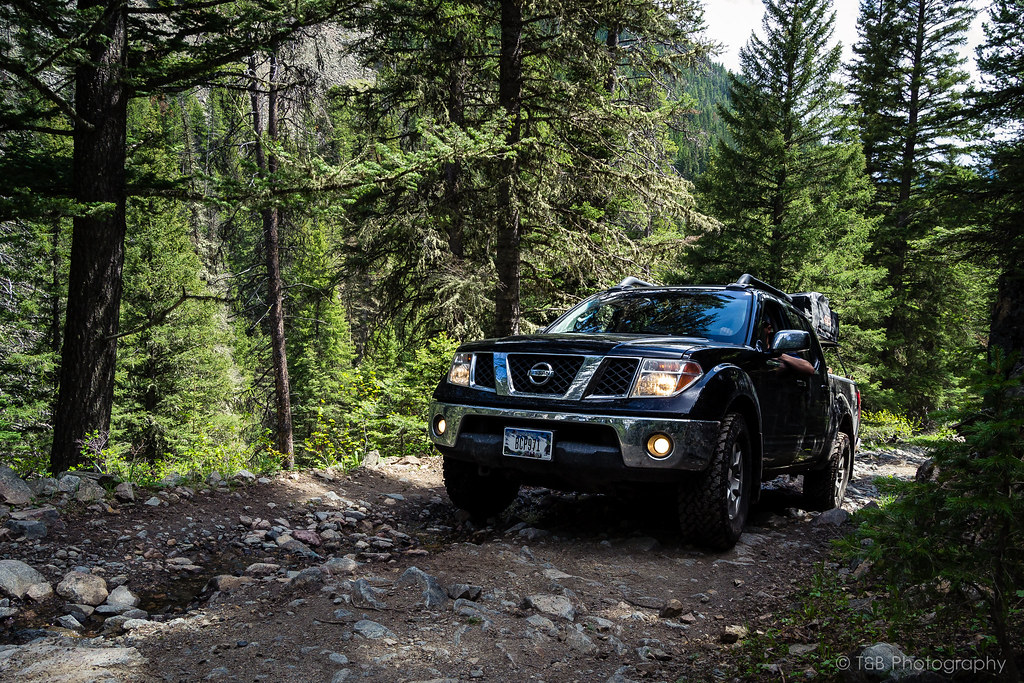 Then our friend in the first gen decided to pick an interesting line. 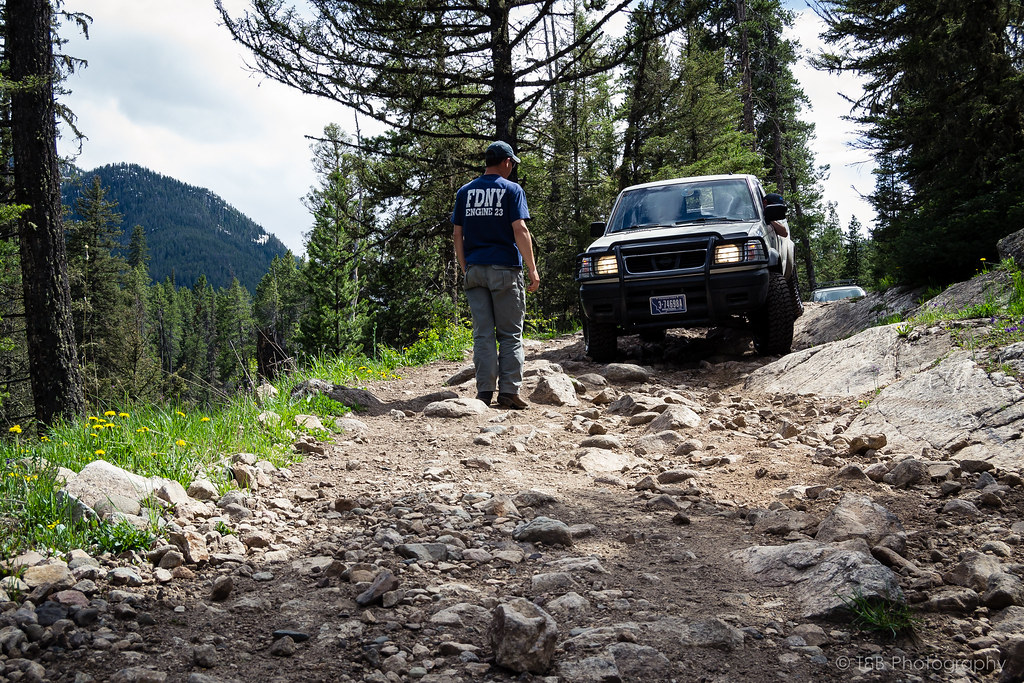 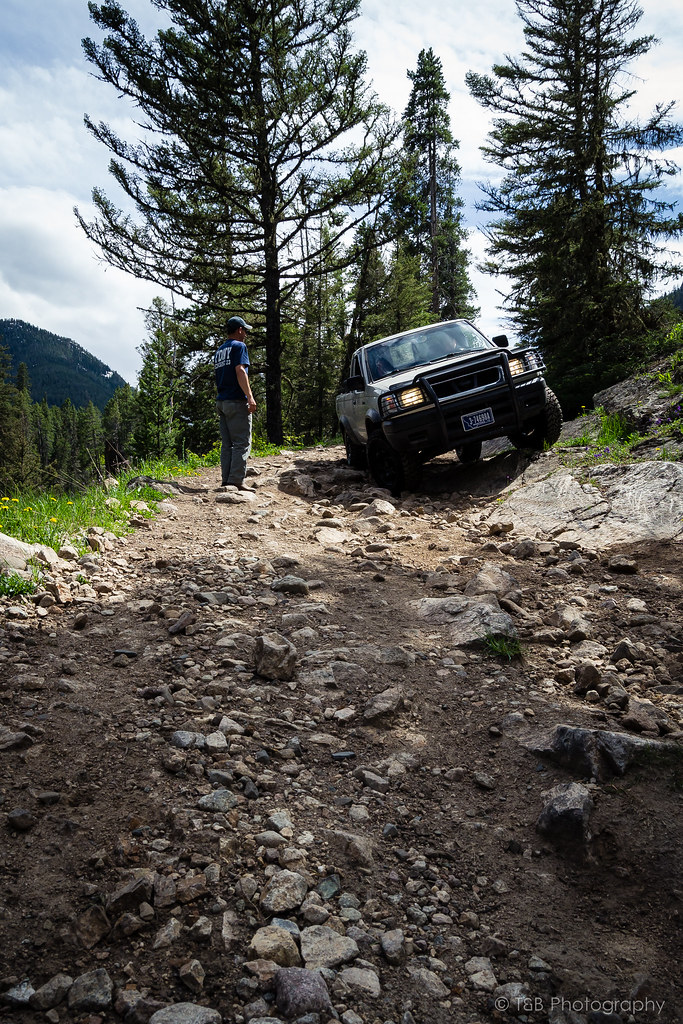 And I got some cool shots of MTWheeler's gorgeous D21. 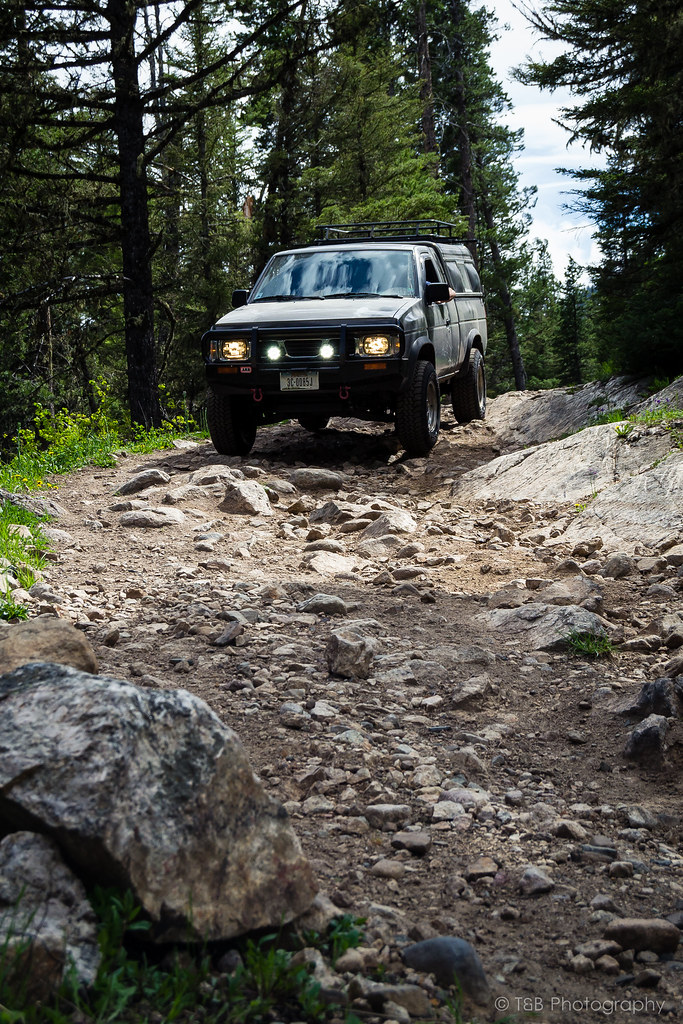 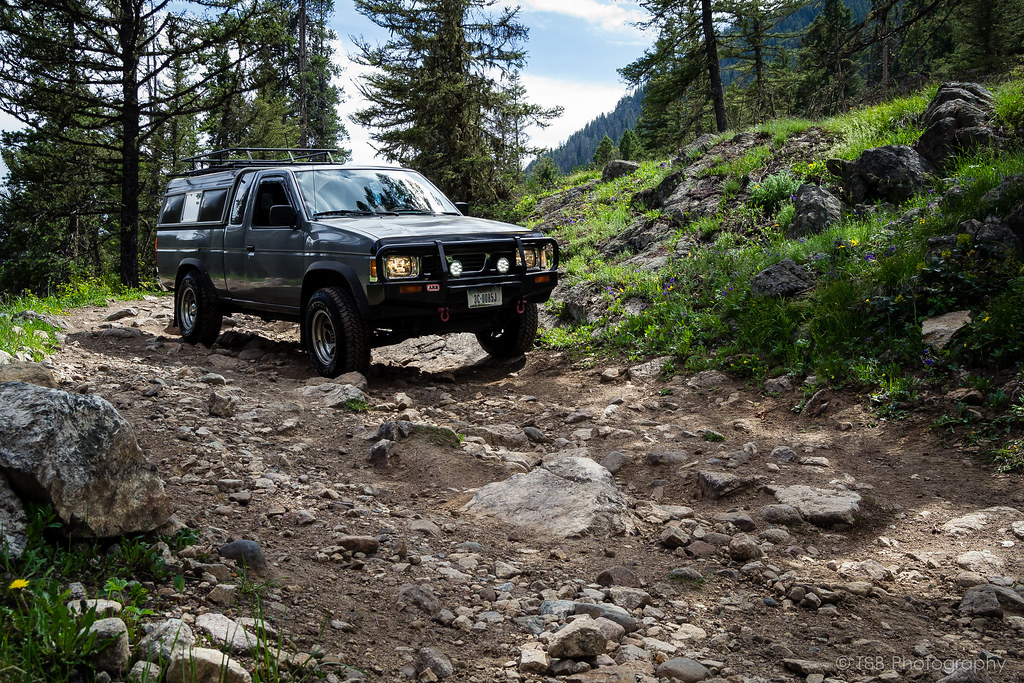 After the bouncy ride on the way down, MTWheeler was in the process of checking underneath his truck when he found a bolt trying to fall through a skidplate. It turned out to be one of the bolts holding the alternator on! Naturally, this required a repair. Luckily for us, this was the only repair needed. 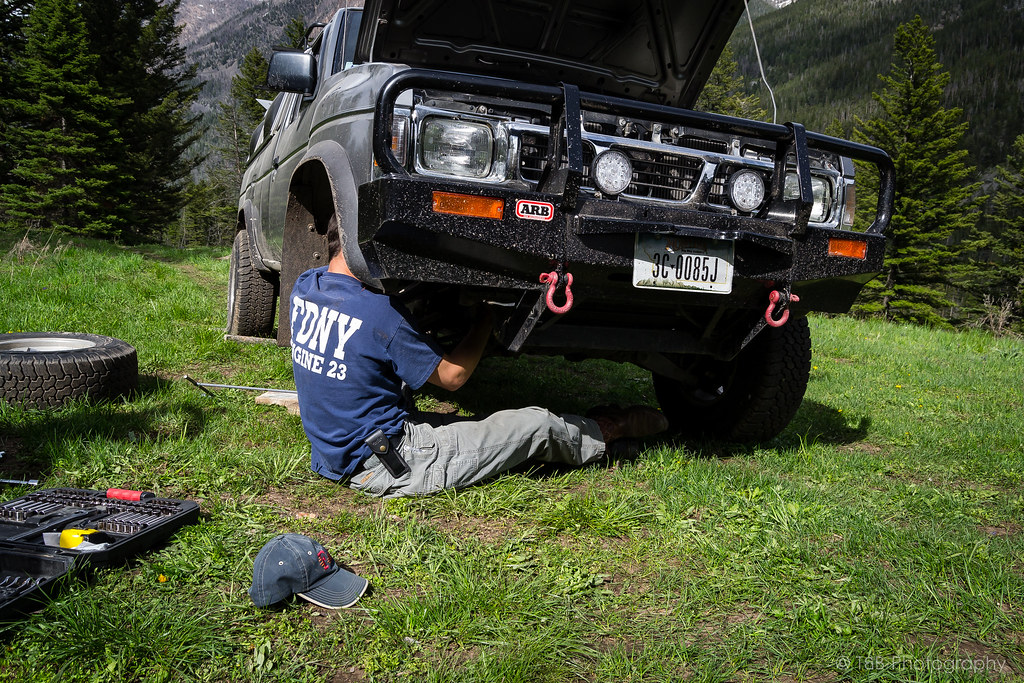 The next morning, I woke up early and got to see some stunning scenery as the sun came up. 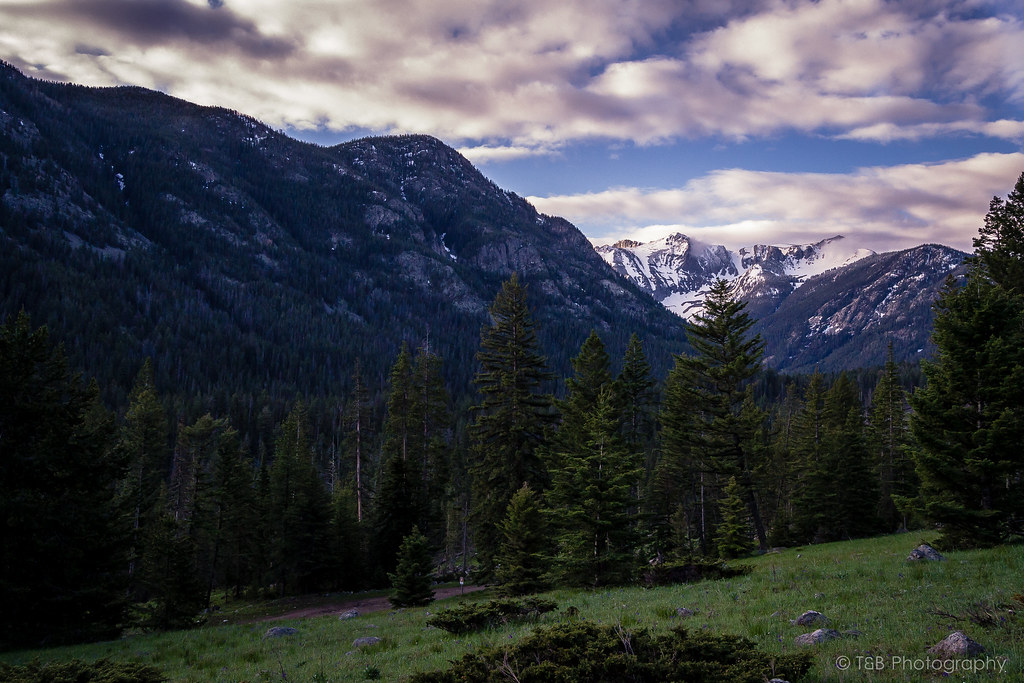 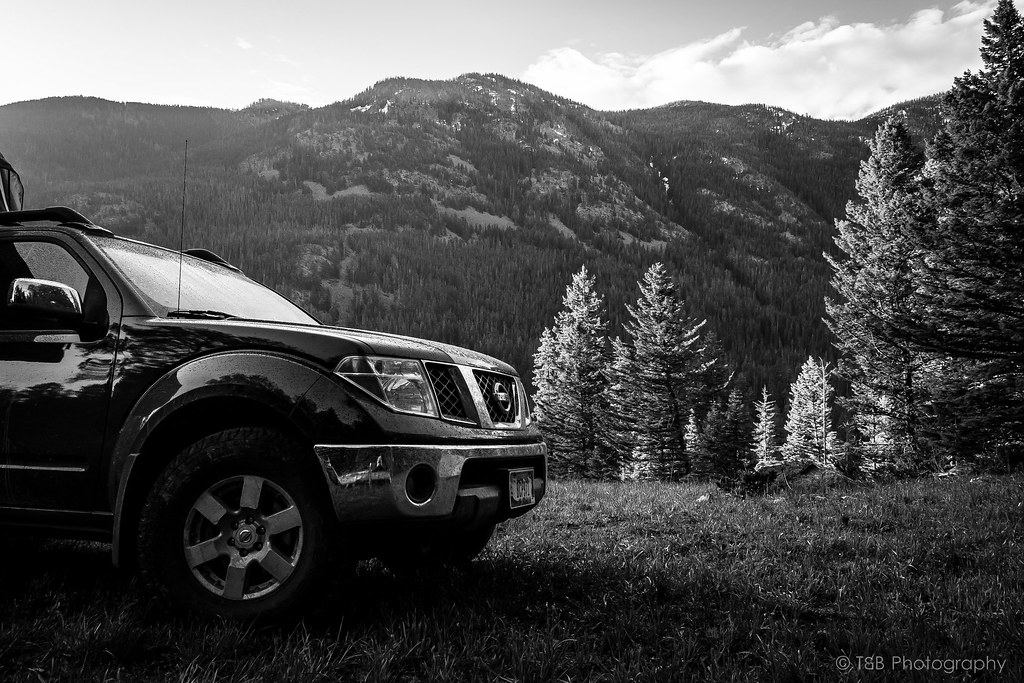 A couple of thoughts after that trip...

I'm fully confident of the truck's capabilities off road now. I know exactly what it will do. However, doing the trail with the tires I have on there is making me seriously consider just running a 265/75 Grabber AT2 instead of the ST Maxx. It's a great tire on the road, and I never had an issue with traction off road. I really like the way they work. They are better than BFGs in mud, and just about as tough. A set of 265/75 Grabbers is only $153/tire vs the ST Maxx at $180/tire. So that's $612 vs. $720. Hmmmm....

There are some downsides to the AT2 though. The tread isn't as aggressive or as deep, and they aren't quite as tall of a tire. That being said, I really like the way they look. The ST Maxxes aren't perfect either, as they are a little heavier (54 lbs vs 52 lbs), although not by much.