I built a bedslide for my last truck that worked great for us. I used 3/4" ply, 2x4's & non swivel caster wheels from HF. Not fancy but it worked great.

I finished up my drawer system. Initial build out was done by a cool dude up in Santa Barbara and I made some changes.

Anyone know what to line the interior drawers with? Or how to tie down the whole drawer system. For tie downs I plan to use generic tie down rings unless any has any better ideas

Hoover77 said:
I’m wanting to build a set of drawers for my Tacoma and was wondering if anyone has used something like a ball
transfer bearing for the drawers to ride/ slide on? Like these mounted in the baseplate.
View attachment 496228
Click to expand...

Those have worked out great for my set up. See post #2104

In progress - Going to 'GASKET' it too. No dust in the near future. 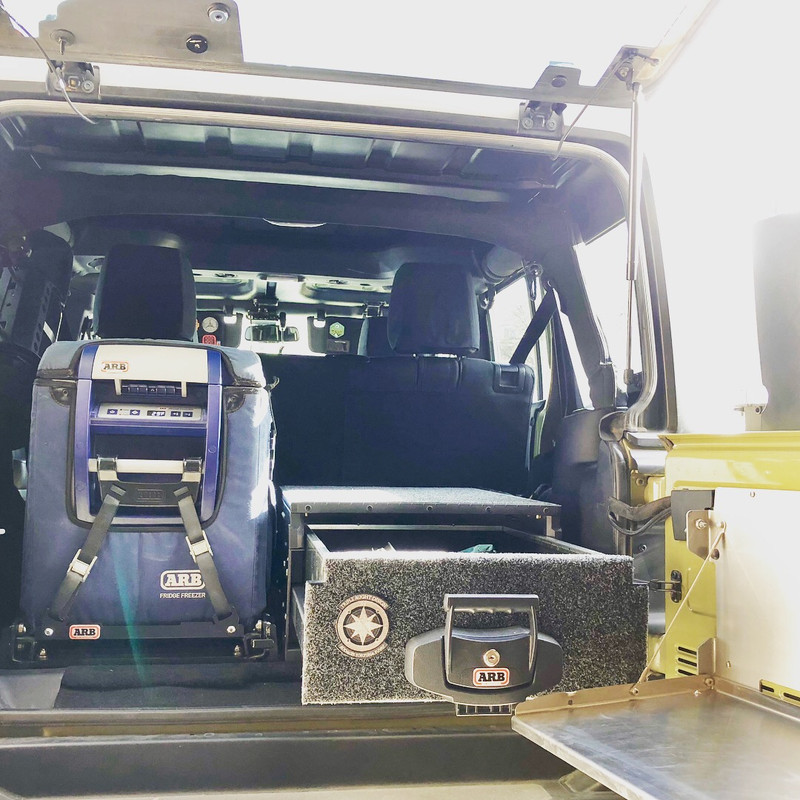 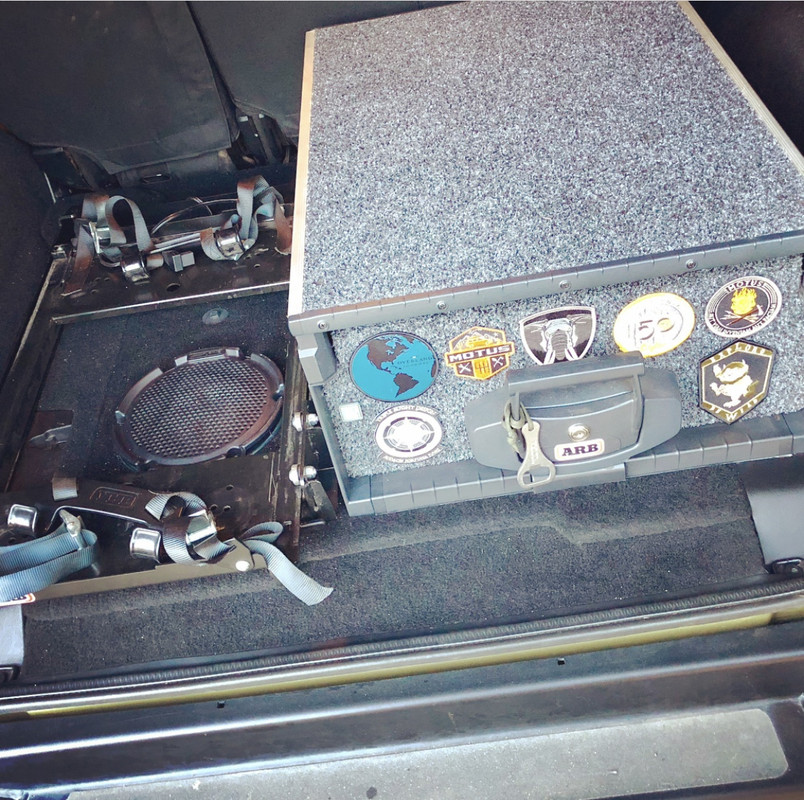 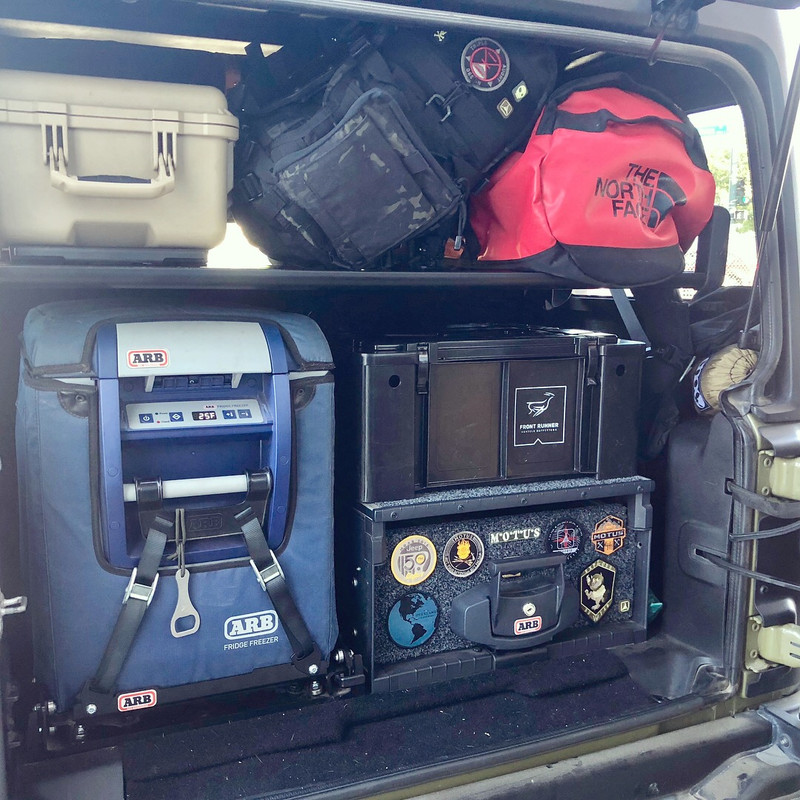 A work in progress - Addresses the recent post asking who likes 'boxes' and who likes 'drawers'. And introduces something not often discussed - storing a spare tire inside.
So.....I like boxes (Wolf Boxes, with high lids) versus drawers or slides.
I also like less weight on the tailgate, not so much because of worry about the strength of the support, more from the standpoint of keeping heavy things between the axles and low. Also I've seen a few times when things hanging out on the back touch the ground when climbing or going thru a steep valley.

Having laid all that out there, this is what I'm putting together before the next adventure (Moab in April). I position the spare inside, upright and behind the driver seat, fastened down with 2 straps hooked into a short length of track (yellow in the pics) in front of and behind the tire.

This spare will also be held against a vertical surface that is along its outboard side. This vertical surface (bent 1/4" plastic) is fastened to the side of the jeep at the soft top rail, and its lower edge rides on the floor. This bent shape forms a shelf, under which I will fasten an air hose that recoils (blue in pic), and on top of the shelf will be fastened my OBA compressor. Both are then positioned for easy access.

To the rear of this shelf is a similar but smaller bent plastic shape that forms a shelf for my freezer (small 12v unit). It too is now easily accessible (altho I have to stand on tippy toe to see into the bottom.) The 'frig' (another small 12v unit) sits on the floor behind the spare.

On the starboard side of the jeep I will be fixing my 2- 1" fiberglass grates that can be used for 'stuck times', if that ever happens. In the meantime, they are stowed in a manner that form a shelf on that side. I will stow lighter items along there, such as a soft side cooler (blue in pic), the tent footprint, maybe some other things I have yet to figure out where to put.

Thru the middle of the jeep, I have 3 Wolf Boxes, w/ high lids. Some items may go on top of these but for the most part I like this arrangement because if I tilt the passenger seat forward (Jeep LJ) and place a sleeping mat on top of the Wolf's, I have a nice place to catch a few winks, say for when I have a long drive and need to take a rest
.
Not shown, but planned, will be a single red Nato can tucked nicely against the outside of the tailgate, along with an Ammo can holding some recovery gear. I'll say this in regards to storage. We are 5- that's every seat. Anything we bring or store has to be well thought out. Lots of the solutions we come across, the seating is compromised. Do most of you folks travel solo?

skygear said:
I'll say this in regards to storage. We are 5- that's every seat. Anything we bring or store has to be well thought out. Lots of the solutions we come across, the seating is compromised. Do most of you folks travel solo?
Click to expand...

It's just me and 1 other but I run a yj so I dont have too much more room either. I'm getting a cargo net for the back half. Then I can hang all sorts of molle backpacks and pouches everywhere to keep stuff organized and out of the way. If that helps you any. (Not my pic stole it off pinterest) 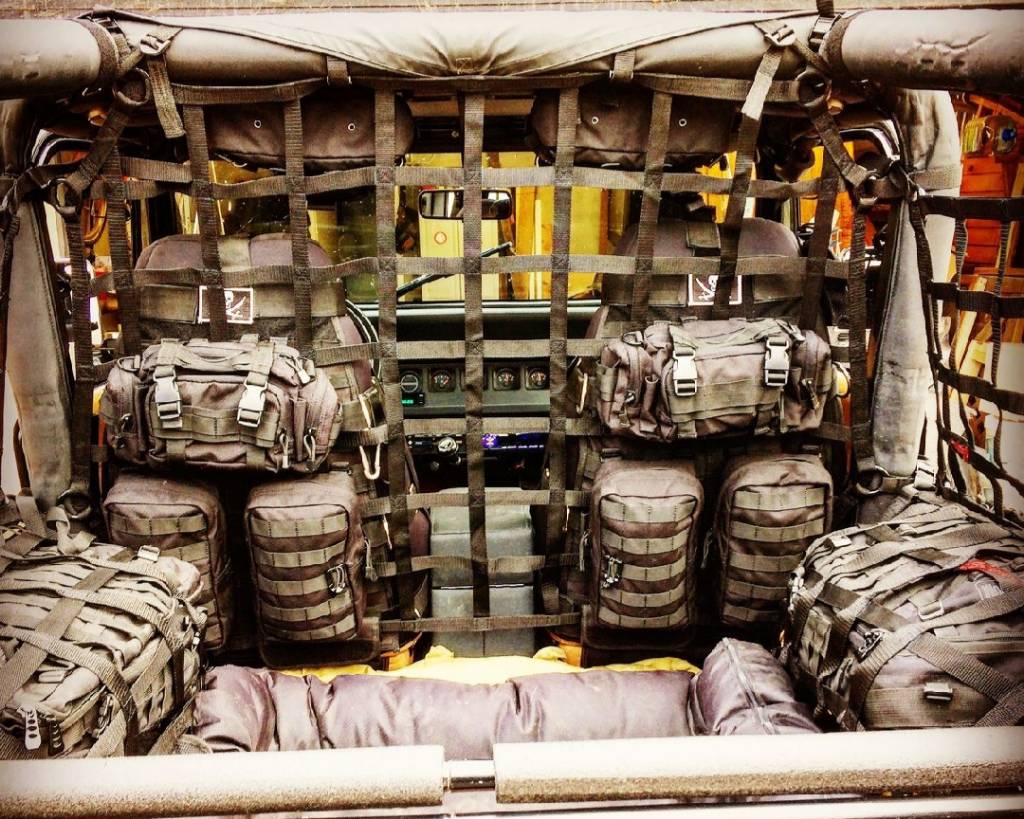 Sent from my SM-G965U using Tapatalk

I am tossing around the idea of build a new drawer platform.
I was thinking 3/8 plywood for bottom and 1/2 for the sides and top. Then throw a coat of bedliner on it.

For those that build drawers out of plywood, what joins and assebly techniques are you using?

Mine is entirely built out of 3/8. But it is 7 layer birch ( around here north east quebec) we call it russian plywood ( ok, found out it is baltic birch). And built using outside carpenter's glue and finishing nails. So far, it as held up to 4 years of being bounced on thousands of miles of bad dirt roads In the back of my 2005 LJ wranglers.

1 arb 38 qt arb fridge on slide, I large drawer on long slide, 1 small drawer, I inserted shelf and any loads I can put on top of it, even My 85 lbs dogs when she see me walking away from the jeep. Lol
Last edited: Apr 30, 2019

the snout is a bottle opener, eh?
T

I made a set of drawers for my Tacoma. I just sold the truck last week and the drawers need to go. Build Thread.

Check out the for sale ad here 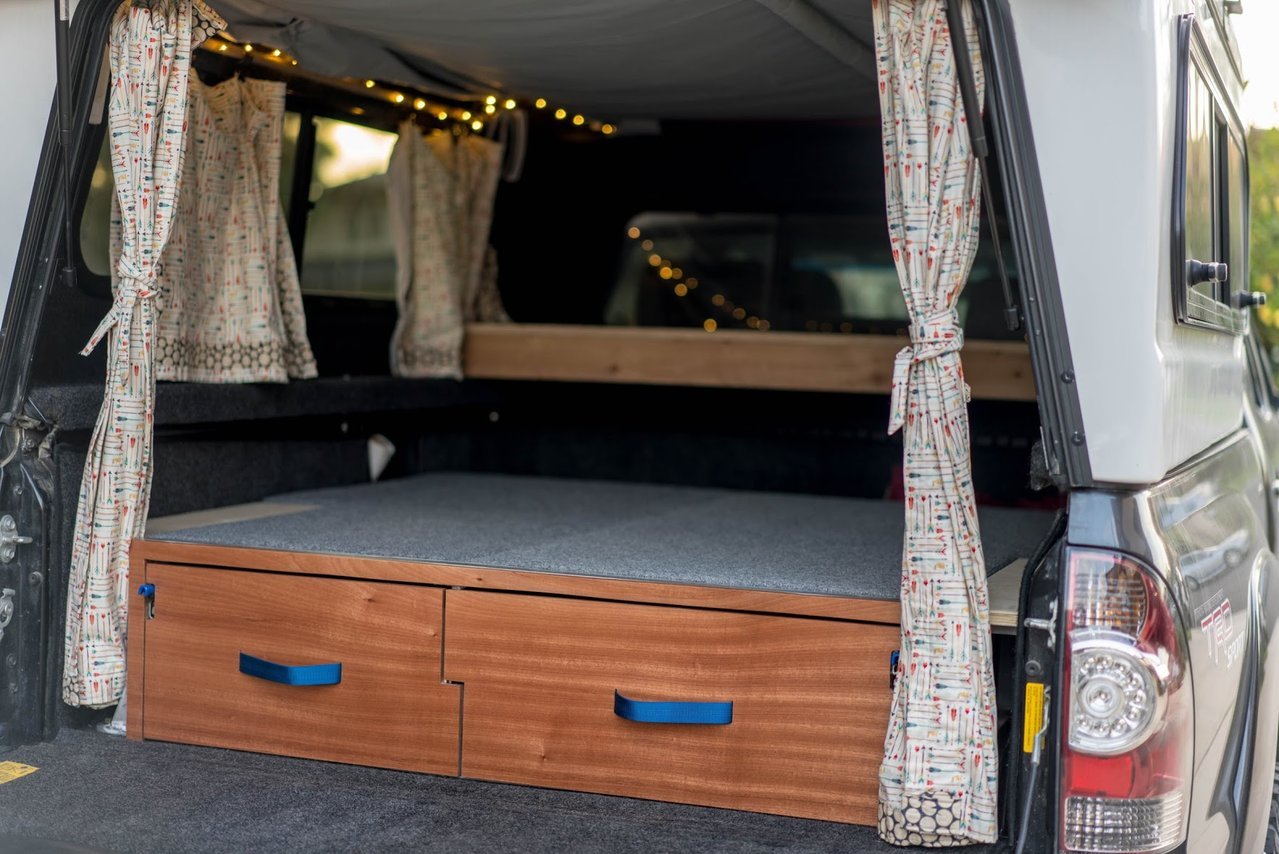 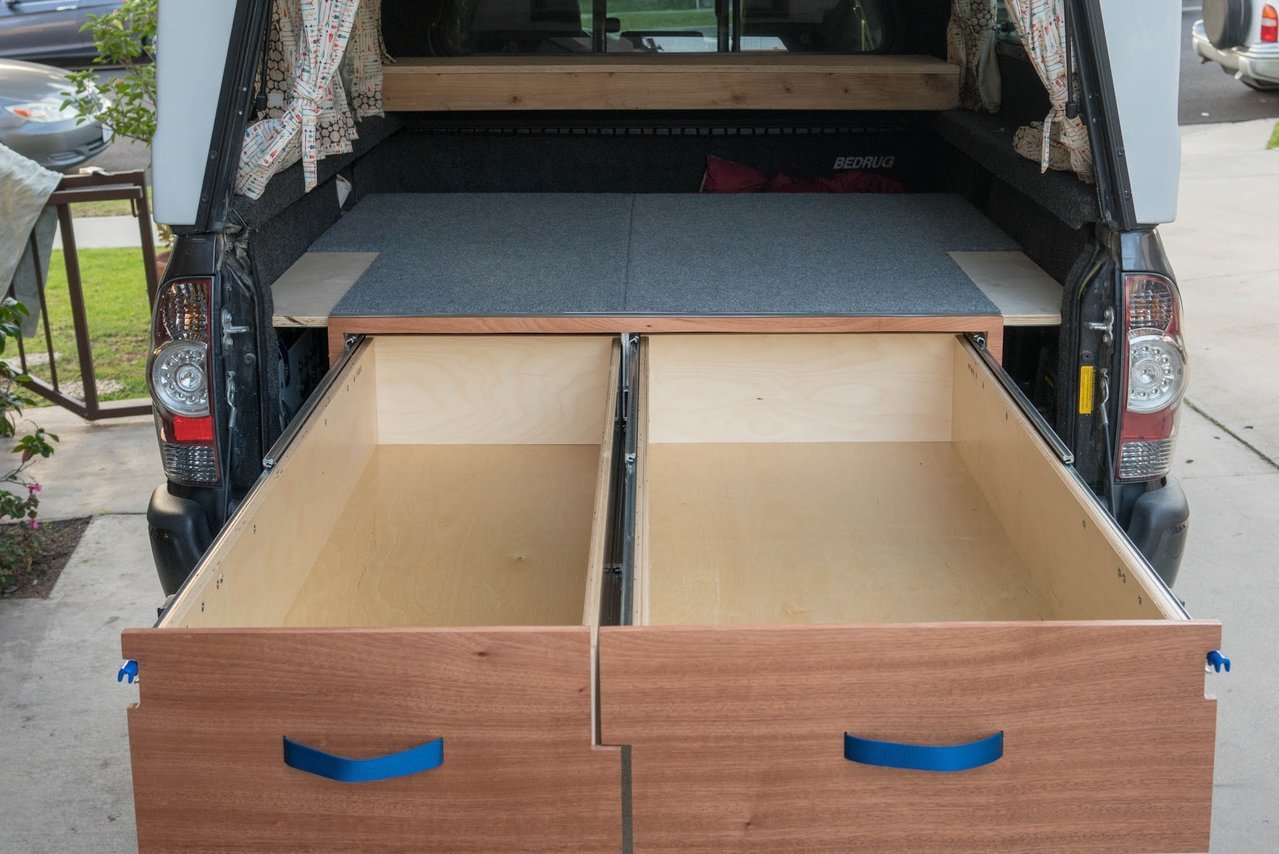 I have a 1995 Montero SR, and I honestly never used the rear seats (and they were a major pain to put up and down) so I took them out. I've looked at a lot of rear storage ideas, but never saw anyone who had different sized boxes on each side. I wanted to keep the ability to put my garbage cans in back and haul relatively tall stuff, while also having the ability to have a mid shelf where I could store stuff underneath. So I came up with this. I am not finished yet- I need to get some metal channel where the plywood center piece can slide in either up high or down low. The down low slide will allow the plywood to slide out when I am going hiking, where I can put all my stuff there before starting out. I am happy with the design, and after looking at literally hundreds of pages, I never saw anything similar.

So I discovered one of the real charms of owning an old truck. You get to build stuff.

Just finished a storage box for the ZR2. I realized that the molded feet on the Rigid 22" tool boxes at Home Depot exactly fit the grooves in a Pendaliner bed liner, which got me to thinking about putting s shelf on top of them and one thing led to another.

1/2" plywood tops - one to cover the two tool boxes as they are housed lengthwise in the bed and a second, hinged, top for access to a forward compartment of the box. Handles on the sides of the tool boxes allow me to grab the deeper box from under the shelf.

As you can see from the pix, the shelf also serves to define a space for a Jerry Can at the front of the bed on the passenger side.

The leftover width of 1/2" board fits over the passenger wheel well and sets below the top of the main box so I have storage area for the fly rod cases and they can't escape. The side shelf is a snug fit - no attaching it as I may want that space for other things as well. The whole rig is designed to be removed from the bed whenever I need to haul more lumber or stuff than the space on the driver's side of the bed would allow with the box in.

Need to get a handle for the storage bin lid and get e couple of coats of polyurethane on everything and it will be good to go. Probably also use some scrap 2x2 spindles to provide a low fence on the shelves to keep small stuff from just flying off the shelf. The boss wants to be able to hang towels to dry, so once I get the camper top back from the paint shop I'll see how tall I can make a couple of vertical poles which will attach to the front and back of the left side of the box and I'll string some line between a couple of pulleys so you don't have to crawl up into the bed to hang towels.
You must log in or register to reply here.
Share:
Facebook Twitter Reddit Pinterest Tumblr WhatsApp Email Link
Facebook Twitter Youtube Instagram
Top