I have a late 60's Uk 3/4 ton military trailer known as a Sankey Mark 1. I bought the trailer on a whim for 62pounds on ebay Uk because it was close to Liverpool where I had a container loading and the seller agreed to deliver it to the loading warehouse. When it arrived the trailer frame was great but the tub had very little floor left. I used it like this for a year or so but in the interim found what appeared to be a great tub also on ebay Uk. This second tub was close to a dealership I imported defender's for and they were happy to go pick it up for me so I offered 50 pounds for it and the seller accepted. When this tub arrived I started trying to removed decades of olive green paint with aircraft stripper. I could get down to the base layer and the stripper had no effect. @ this point I was in the midst of moving to the farm I owned in Central Virginia so I moved the parts and sidelined the tub swap project. My son and I continued to use the trailer a couple times a year as a camping trialer and in 2012 when we were returning from an Land Rover event he turned the trailer over on a very windy mountain road and a vehicle traveling the other direction tagged the rear of the tub so now it was rusty and bent. Several weeks ago I decided to try the new galvanizing company that opened this spring outside of Richmond Virginia, Commonwealth Galvanizing. I disassembled the entire trailer. We lifted the old tub off with the fork lift and it was truly shot but the trailer frame below was in amazing condition. These trailers are put together with dozens of grade eight fasteners and they all came apart but four. I decided to leave the springs, axle, and mechanical brake assembly alone because they were in fine condition and not rusty. I had been agonizing with the decision many 416 owners wrestle with, do I want to cut in a tailgate or leave the tub original. I decided to weld a receiver hitch to the frame and not cut the tub up. Harbor Freight has 18 inch class III receiver tube for around $20 so I went that route.

Commonwealth first tried to burn off the paint and undercoat from the parts I delivered by dipping them in the molten zinc tank. This was only partialy effective so they ended up soaking the parts for long periods in their weaker acid bath and periodically scraping the paint off until the parts were clean. When I picked the parts up I was amazed and quite pleased that the bill was only $225. I had also dropped a defender bulkhead/firewall off to be galvanized so there were easily 300-400 lbs of metal in the job.

The ladder rack is a cheap one from Pep Boys that adjusted down to fit the Sankey tub. I used two pieces of channel steel I had lying around to make the fore/aft crossbars to mount the ARB to. This setup was mounted on the old tub and worked great as it got the tent up to a good height but also didn't impair the use or access of the tub below. My intent once the trailer is back together the way I want it is to let a friend who specializes in selling canvas items to our military branches, make an enlosure that will allow the 4 sides to be rolled up when in camp but close tightly to keep the weather out. Most all of my gear is stored in 3 military Hardigg cases that I store in the trailer year round so when we want to go anywhere all that needs to be done is stock the fridge, hook up and roll.

Sankeys are great for rtt setups as they come with stabilizers built onto the trailer frame and when the tent is deployed it is rock solid. I'll post up pictures of the frame with the stabilizers mounted once I have them sprayed satin black and mounted.

Where are the pictures?

I have two AT Jerry can holders and two 20 liter water jerry cans. I had thought I wanted to mount them to the front of the trailer tub so they were out of the way but keeping the majority of weight on the tongue/pintle. Because of the hand brake mechanism and the fold up stabilizer/jack this doesn't look like that will work. I'm now thinking inside the tub but still in the front on either side in front of the wheel wells. I'll use the front of the tub to mount a shovel and axe with quick fists.
Last edited: Apr 19, 2014

The Alchemist, 25th Anniversary: A Fable About Following ...
by Paulo Coelho
From $4.47

Much better.
That is a very nice Sankey!
Your defender is sweet too!

Do they share the same hub pattern?
Will the sanky match the defender?

Sankey's were designed to be towed behind land rovers. This old one I have is the width of an old series model. The later ones were widened to be the width of a defender. Yes they share the same lug pattern and the wheels currently on the trailer are whats known as Wolf or Nato rims that came off one of my trucks. The tires are too tall though- need to go to a lower profile, these trailers are already pretty tall.

The silver truck in the one picture is a customer truck in for an engine swap from turbo diesel to 4.6 fuel injected v8. Just moved it outside until some final bits are delivered to complete the conversion.

The trailer is very bright right now but will dull quickly as galvanized items always do. The intent behind galvanizing it was to preserve it indefinitely. I like to try and insure the things I work on outlive me. For what it cost it seemed like a no brainer.
Last edited: Oct 30, 2013

But yes - he does have a nice Defender too

Good work mate - keep it up. I have come up with what I hope is going to turn into a fantastic drawer system for my Sankey - I will share when tested and completed!

The tub is balanced very well!
If you would like to mount two 20l jerry cans in front of the it, you will need a spare wheel at its backside. 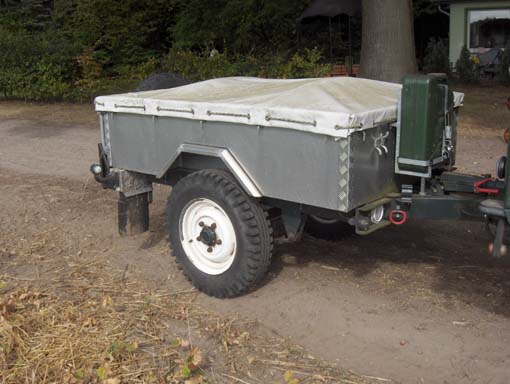 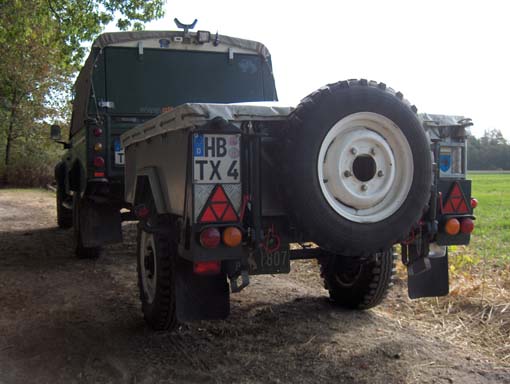 Where is the handbrake assembly?
You know it'll make sense to crank the lever a little bit, to get it out of the range of the rear door? 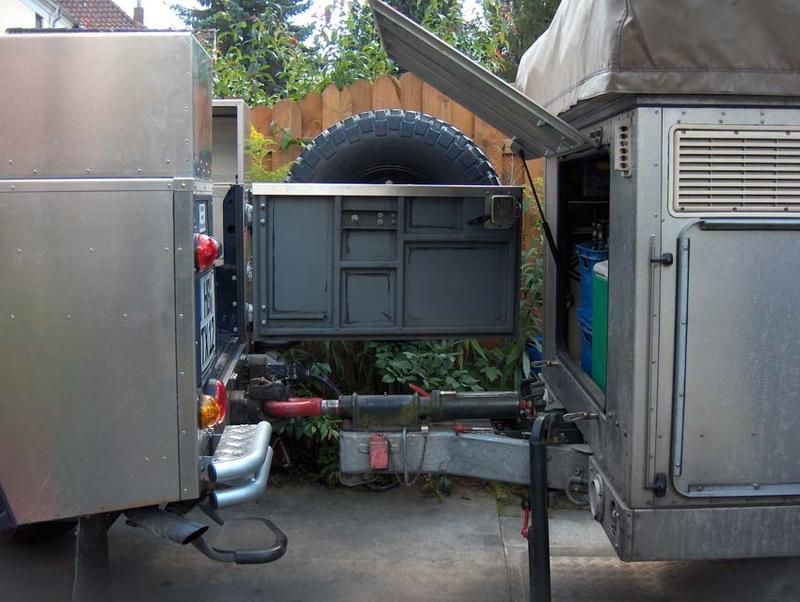 But this doesn't work with jerry cans in front of the tub! You will need a longer draught bar then!

A couple of them are ok, Craig... thanks mate.

Kurt,
The type of hitch we have over here known as class III is a receiver and you can insert an extension and then your hitch so rather than lengthen the tongue I can place the pintle hitch closer to the trailer. I'll take a picture of what I mean and post it later.

I have marveled @ your craftsmanship in most every one of your posts. Perhaps you can shed some light. I usually pull the Sankey behind a 130 hcpu. If the trailer is level to the truck (adjustable height hitch) the damn thing sways back and forth wildly @ speeds around 55mph. If the tongue is angled down/weight forward on hitch as opposed to balanced on tires I can tow it 90 mph without issue (not behind the tdi 130 obviously). The rack and roof top tent pictured weigh around 300lbs but the weight is centered over the axle. While this raises my center of gravity it shouldn't effect the tail waging the dog. How do I get this to tow nicely when level ?
Last edited: Oct 30, 2013

You become nervous by the bouncing noise of the Nato hitch?

This is caused to a listening comprehensive test: if you can hear him bouncing in the back, he'll still be there! :wings:

Just add some rubber of an old tire to reduce the play.
But be sure, the clamp is closed firmly!!! :Wow1:

Kurt,
Not worried/concerned with noise, the trailer does not track straight @ times. It sways back and forth on the hitch. This is a weight distribution issue and may be rectified somewhat by putting shorter tires on the trailer. The 235.85's on it now, are way taller than the stock arrangement. My 130 is on 35 inch tires and while I hardly know the trailer is back there I can see it swaying wildly in the mirrors. Guess I'll play with weight distribution when I get it back together. The last time I had an issue with it I had a fair amount of firewood behind the axle line of the trailer which I'm guessing was heavier than my gear in front of the axle.

Hm, maybe I missinterpretated your "sways back and forth". Swaying wildly in the mirrows means the trailer tries to make turns round the vertical axle of the center of gravity. This is what happens, when the center is located behind the axle.

Maybe the wind pressure against the RTT dislocate your CoG when driving at 55mph?
My Sankey with the tent on top never is to be shown in the mirrows when driving straight. It runs on 7.50R16 that equals 235/85 R16. No problems at all with this set up.
Top speed was 75mph. GPS generated!

On the other hand I have a look to put havy things in front of the axle, when storing.

Unladen weight, but with tent on top is about 600kg. The tent weights about 120kg. The center of gravity is way high! If he flips to the back my 80kg body is not able to move him back! If the tonge is down, I feel a pain in the back but I'm just able to lift the tonge.

In horizontal position the tonge weight is about 30kg.

Doug - I am unsure what mine weighs when loaded up with all our gear...however, towing it behind the Excursion at 80MPH+ is no worries at all...sits perfectly behind it. BUT - the nose is down - I can't level the trailer on the X because I don't have a long enough hitch plate. Now I am driving to ROTR with it behind the RRC in a couple of weeks - and it will be close to level, so we will find out how it travels then.

One big difference between your one and Kurt's though is the longer drawer bar on mine. Plus all the added sheets of Aluminum and steel bar stock, plus boxes and rack for RTT. You know you have seen it.

Long Way Down: An Epic Journey by Motorcycle from Scotlan...
by Ewan McGregor, Charley Boorman
From $7.95

a couple pictures of the rear watertight military lights with screw on thick glass "beehive" lenses. Hope to have the tub back on today. These pictures also show how the rear stabilizers attach. Every recovery/ lashing ring as well as the stabilizer/jacks all have 5/16ths thick backing plates. Sorry for the glare its raining outside.

The turn signal indicators should be placed at the inside. Tail lights are outside.
Btw. the glass lenses are very rare! You should have an eye on them! :ylsmoke: 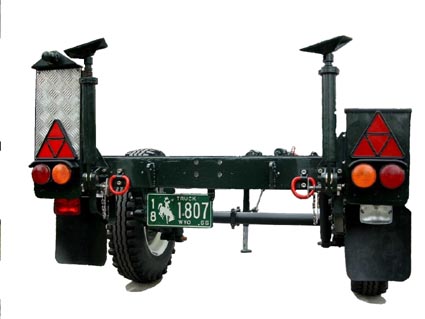 Are you sure to put the square plates behind the supporting legs? This space is needed to fit the tub.