I have an MFC I acquired a few years back that once I obtained a legit Scepter spout for has been awesome. The problem is I need more and while looking I encountered some information on the Wavian NATO fuel cans and they look really interesting. Price isn’t really a factor since both are expensive, but for those who’ve used both which do you prefer? I like how easy the Wavian stuff would be to source here in the US, but the MFC is the bomb other than I only have one. My goal is to have 5 cans for storage around the house and obvious only take 2-3 with me on trips.

jonathon said:
I have an MFC I acquired a few years back that once I obtained a legit Scepter spout for has been awesome. The problem is I need more and while looking I encountered some information on the Wavian NATO fuel cans and they look really interesting. Price isn’t really a factor since both are expensive, but for those who’ve used both which do you prefer? I like how easy the Wavian stuff would be to source here in the US, but the MFC is the bomb other than I only have one. My goal is to have 5 cans for storage around the house and obvious only take 2-3 with me on trips.
Click to expand...

If you want more MFCs, DS Tactical isn't too far from you.

DS Tactical is a great shop, I dropped in there when we drove up to the Yukon a couple of years ago - highly recommended.

I bought a Wavian because I needed one for a trip last minute and couldn't get a Sceptre quick enough. I haven't had any problems with it. The nozzle is silly, but it works.

Sent from my SM-G965U using Tapatalk

I have 2 wavian cans and hated those damn spouts. But with these
https://www.toolfetch.com/wavian-long-nose-flexible-nato-jerry-can-spout-nozzle.html?gclid=CjwKCAiA9JbwBRAAEiwAnWa4Q2W0zda_4-k9aKktCM7FLfqP0yu4bt_AgTWKqf6-1cHx7pm5ZPmmlRoCq_IQAvD_BwEed
thet are great! They pour really fast and mess free.

The Scepter MFCs are almost indestructable, don't dent, can take a bullet without igniting the fuel inside.
In my experience they also seep more vapor since they are plastic. I hate leaking gas-smell.
I switched from Scepter MFCs to the Wavian-type jerrycans and the fuel odors are reduced 99%. There's barely any. That makes me happy.
My past experience with the metal flex tubing used in gas filler spouts is that the flex tubing always leaks when you pour. Maybe somehow they fixed that problem?
I use these with my Wavian-type jerrycams:
https://www.roverparts.com/Parts/GJC002
I use a bulk fuel hose extension (I think it's 5/8" ID) and the adapter supplied with the nozzle, and feed the hose down into the throat of the gas filller on the 4Runner.

Maybe your MFCs had bad cap threads or seals. I've never smelled fuel from mine, even after they've pressurized from heat or elevation change.

Either can is a good choice, though. If I didn't have MFCs, I'd have Wavians.

yeah, they aren't 'seeping' anything. It's either damaged threads or seal interface, or fuel dripped or spilled on the outside of the jug.

If a person isn't already tied to NATO-spec MFC / Jerry can carriers, I would suggest getting the newish Scepter 'civilian' jugs. They look about the same, have a wider bottom for better stability and are about 2/3 the wall thickness, by weight. And they cost $24 brand new.

And I'm using ~7' of 1/2" ID clear PVC hose and a copper 'Super Siphon' fitting for transferring fuel. No standing around holding 50# and trying to use crappy CARB / EPA nozzles. Just set the jug / can so the bottom is higher than the filler neck on the vehicle, insert the open end of the hose in the tank, insert the SuperSiphon in the jug / can and give it 4-5 vertical jerks and the fuel starts flowing at about 1gal/50secs. And you go do something more productive for 4mins. Come back before the end to pick up the can and tilt it to get out all you can with the siphon.
No spring-loaded crap EPA nozzles, no leaking flex nozzles. No standing around holding a heavy weight.

There's lots of copies / versions out there. It's just a swaged piece of copper pipe, with a light spring and marble trapped inside of it. It's like a reverse-snorkel. When you want to start the siphon, jerking the hose up and down in the jug makes the marble block the flow out of the hose so each stroke plunges more fuel into the line until enough is trapped to start the siphon action. SimpleSiphon, SuperSiphon, Super EZ Siphon 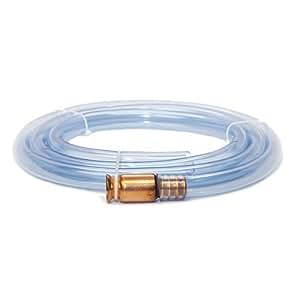 Thanks all for the input. I ordered a GELG can from jerrycan.com to try out. $54 shipped for a can and spout is pretty darn cheap. If I like it I may end up ditching the MFC setup and getting more NATO cans.

jonathon said:
Thanks all for the input. I ordered a GELG can from jerrycan.com to try out. $54 shipped for a can and spout is pretty darn cheap. If I like it I may end up ditching the MFC setup and getting more NATO cans.
Click to expand...

Looks ok. See how it deals with being pressurized in the heat of summer.

Verkstad said:
You should be happy with it. Support Polish industry !
Gelg are pretty nice.
Really, its hard go wrong using any of the usual european manufacturers.

I still have a hard time accepting their pricetag...
Back in the day, a guy could import a container load of nearly new surplus, sell them at 10-15$ each and still make a load of profit.
Click to expand...

I ran across the GELG can doing some mega Googling. There is a YouTube video comparing the Wavian (aka Valpro which is made in Latvia) to the GELG and the differences were pretty minor. The one I ordered was black so it should get pretty warm in our summer heat. My MFC swells big time and requires the wrench to open it but it doesn’t leak at all.
J

Received my GELG can - looks really nice and seems to be quality. I’m not sure a Wavian aka Valpro would be a big improvement especially since the GELG cans are $35 each shipped versus $50 or more for the Valpro.

The spout I bought seems to suck as it spills fuel out of the vent. The vent is just a hole. It does not interface with the vent in the can. I’m not sure if it’s defective or just crap.

I did snag a Valpro 10l can with spout so I’ll compare the spouts when it gets here. I’m okay with buying GELG cans and Valpro spouts.
J

So the folks at JerryCan.com are sending me a replacement spout which is awesome. I’m not sure if it will be any better. I will say once I got it going the spout stopped leaking but there was no way to pour fuel without a leak at the beginning.

I did receive my 10l Valpro can today. The can is stamped Wavian. Comparing the two side by side I believe they are pretty equal. The two major differences are the handle welds are continuous on the Valpro versus large individual welds on the GELG and the seam is a little proud on the GELG versus the Valpro. Quality is identical. The welds are little ugly on both and there is spatter here and there. The exterior coating is good on both, seems really thick on the Valpro though. I’m neutral on the cotter pin versus bayonet pin - nice thing is the Valpro pins are $3 if one really feels they need to upgrade. I also believe the Valpro is .9mm steel versus .8mm on the GELG - the difference is not noticeable.

The Valpro spout is a lot better. There is a vent built in and it should pour better. I’m going to test both cans tomorrow with the Valpro spout. I have found that the OEM Ford capless fuel filler funnel is the best way to fuel vehicles with flappers. Stuff the funnel in and then use the can spout to fill.

Bottom line? I’d buy whichever can was cheaper and get a Valpro spout. I’ve heard the Swiss spouts are awesome but they are around $50 so I doubt I’ll try one.

Here are some photos. GELG in black, Valpro in green.

Tested the Valpro spout on the GELG can today. Just to play around I transferred the fuel from my MFC to the GELG and then from the GELG to the 10l Valpro and finally into my Chevy.

The MFC with the proper military spout is fast and due to the length and flexibility it is easier to use and quicker. That said the Valpro spout works very well and the NATO cans are much more readily available here in the states. I’m going to snag a couple more 10l cans and 4 more 20l GELG cans.

Bottom line: It depends. I think the MFC with the proper support gear is superior by a small margin, but the cost and availability in the United States are major barriers. For my dollar I will be buying NATO cans, but my MFC kit isn’t going anywhere. If I ever make it to Canada I’ll pick up a couple more.
Last edited: Jan 16, 2020
You must log in or register to reply here.
Share:
Facebook Twitter Reddit Pinterest Tumblr WhatsApp Email Link
Facebook Twitter Youtube Instagram
Top