Type 1 Ambulance "The U.A.W" or "Adventure-lance"

I would like to introduce my latest project, as the Title says.. The "U.A.W" (Ultimate adventure Wagon) or the "Adventure-Lance." I have posted several pictures various places, but as I have been doing a bit of work to it I figured I would go ahead and do a "Build" thread. I say build in quotes because I don't actually plan to do any crazy, or over the top "custom building." I feel I am starting with an already quite capable, reliable, solid rig.

I have done several projects over the past year or so with One Being an E350 ambulance named " Van Diesel" and the other a 2004 Diesel Excursion which was a former fire chiefs truck. My latest project is a 1992 Ford F-350 Type 1 Ambulance (Wheeled Coach) with the 7.3 IdI, and factory Ford 4x4 with ..... 32k original miles! I purchased this vehicle site un-seen at auction in Wisconsin... I live in Virginia.... I had been following the auction for several weeks, and it just kept calling out to me! I dont know why... just deep down inside of me I knew this would be my next project. So on the last night of the auction I was sitting around my place cruising the auction (drinking bourbon) when I decided I would make ONE LAST BID on the rig with about 8 hours to go... I fully did not expect to win, but low and behold Congrats! Im the winner! So I went from drinking bourbon in VA to oh crap, I have to somehow get to Wisconsin and back within the next few days... Bought a ticket, called the guy who was the contact for the Auction, and arrived in Wisconsin two days later to pick up a truck I had not yet seen, in a town I knew nothing about, in a state 1k miles away! The entire process was an awesome one, everyone I delt with along the way was just great. When I arrived and laid eyes on it for the first time it was sitting inside the Local municipalities shop. The lead guy there was the contact and informed me they had just done a fresh service and filled the tanks for me!

He tells me this vehicle was originally an Air Force ambulance at a local base, and was then purchased by the city about 8-10 years ago and used on the local airport as a back up police wagon.. So he said it was prob never driven over 35mph its entire life and always kept inside! AWESOME shape. So after I did my once over and said my good byes.. I was cut loose into Wisconsin in a vehicle which was 24 years old and never driven over 35mph!

Anyway this is not a trip report so Ill begin to focus on what has been done. The 1k mile trip went smoothly and the UAV got increasingly better the more miles we traveled.

This is the day I got home from the trip

and How she looks now

For this build I was inspired by the EEXP which is currently a feature vehicle on the portal and for sale. I wanted to do the same type of thing with this ambo.

My first focus is to get it reliable and performing at its peak. I would say the 1k mile trip proved that it was reliable but it still needed the usual like new fluids, shocks, steering stabilizer, and so on... I also wanted to make it less of an ambulance and look more the part of an adventure rig.

the Inside before and after some hardwoods:

There were already some nice tie down points inside so I cut holes in the new hardwood to be able to access them, as i do plan to carry an adventure bike, scooter, or atv while traveling:

Put on some new shocks, Bilsteins all around:

Painted all the emergency lights black:

Painted the interior to make it less abmulance-y:

I also Built a LARGE flush mounting bed.. I wanted it to be large enough to sleep two, but also fold completely against the wall as to not take up living space when the bed is up... also so my full size atv will fit.

Pic of the sunken tie downs:

Kinda how it looks now:

also installed a console in the cab with a computer mount

My goal with the truck is to make is super reliable, very comfortable, and able to be lived in for extended periods of time. I have already installed and air compressor, micro, and mini fridge in the kitchen area... I am still playing with ideas for securing them:

Good things about this rig as a base: Low miles, super reliable engine and trans, 4x4, easier to work on than the VAN, Aluminum box, outside storage, and lots of room inside, without being so big it cant go on 80% or trails or off road situations.

I plan to do some long trips with this rig much like I did with my last rig VAN Diesel... "NO plan is the plan" trip report from last year.

I would appreciate any input from the forum that may be of use to me! Otherwise Ill see ya out there.
Last edited: Jun 9, 2016

Verkstad said:
Nice, and it was also built by members of the U.A.W.!
Coincidence ? I dont think so...
Click to expand...

Ha ha I didnt even think of that!
M

Very nice. I have a similar 1991 wheeled coach with the same box. I will be followings our conversion.

Thanks! I think they are perfect for conversions like this...

Much prefer the F-Series front ends on boxes versus the E-Series. While it makes the rig longer overall, the ability to do more repairs more easily seems like a great trade off.

Even better when you can find an older F-Series Ambo with 4x4.
G

I had this same truck but mine was lifted on 37" tires. It had the same motor the let down for me was the lack of horsepower being as tho it doesn't have a turbo. I regret selling it but I didnt have the funds to do what I wanted to do with it.
G

PHeller said:
Much prefer the F-Series front ends on boxes versus the E-Series. While it makes the rig longer overall, the ability to do more repairs more easily seems like a great trade off.

Even better when you can find an older F-Series Ambo with 4x4.
Click to expand...

Ya totally agree.. they are much easier to work on!

That is the exact same as mine! I love that ours have the large double doors on the back... the lack of power is a bummer, we may never win any races but we will always get there!
M

She is still alive. Banks turbo in hand, ready for install. I will make a build thread some day. 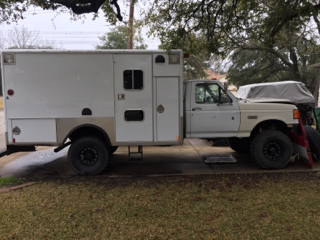 mp_tx said:
She is still alive. Banks turbo in hand, ready for install. Pulled the seats and center console and swapped back to a factory 40/20/40 arrangement. New hood and fenders. Have new power window doors to swap in. I will make a build thread some day.

Sent from my iPad using Tapatalk

Looking good! I have also been thinking about doing the turbo set up, but mine having such low miles I am not sure I want to mess with the originality. I am currently looking for some good front buckets or captains to replace the crap ones that are currently in there.

Did you buy your banks kit new or where you lucky enough to find one on CL or Ebay?
M

Pangle said:
Looking good! I have also been thinking about doing the turbo set up, but mine having such low miles I am not sure I want to mess with the originality. I am currently looking for some good front buckets or captains to replace the crap ones that are currently in there.

Did you buy your banks kit new or where you lucky enough to find one on CL or Ebay?
Click to expand...

I found a used kit.

Since these were used for airfield use, most have low miles but high hours. My truck came from Antarctica, hence the lift for "44 tundra tires--Ambulance II. 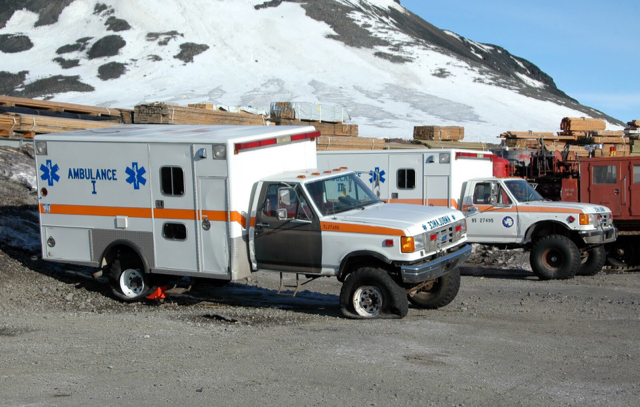