I have a winch (max. 482A draw, Warn 9.5xp) connected directly to the battery without any switch or relay in between. This means it can be powered on even when the vehicle is off. I wanted to add a switch/circuit breaker and was looking at this one:

But at max load and draw of 482A that wont work, any recommendations? the switch above is rated 200A steady-state de-rated and will probably trip 6-7sec if i'm operating at max load. i like the fact that this device adds the circuit protection as well as the switch and i dont have to fuse it separately, any other options?

I might add a second battery at a later stage of my build so should I also look for a switch to accommodate my future needs? thx in advance.
Last edited: Jul 29, 2015
U

This is a hotly debated topic. I am running without it, I added Anderson disconnect, in case of a failure during winching operations which is when it would likely fail...

Is your primary goal to be able to disable the winch, or to provide circuit protection?

For circuit protection you could use a 500A Mega fuse.
http://www.delcity.net/store/MEGA®-Fuses/p_800374

Combined with high-current manual switch this could make a nice setup.
B

Thx for replies all.

If I use this Blue Sea 187 (switch and circuit breaker) in conjunction with an Anderson disconnect and keep the winch from being powered ON all the time by keeping it disconnected does that also protect me from any shorts in case of an accident? The way I have it now, the circuit is powered ON at all times.
U

No, the blue sea is 200amp, you need a 500amp one. Check the link provided above for some specific ideas.
S

unseenone said:
No, the blue sea is 200amp, you need a 500amp one. Check the link provided above for some specific ideas.
Click to expand...

It is rated at 200 amps, but according to their graph it will not trip at 400 amps for at least 15 seconds. Has anyone actually used one of these and found that it will not work in a winch/starter application? There is a review on Amazon stating that it works without issue in a winch application. 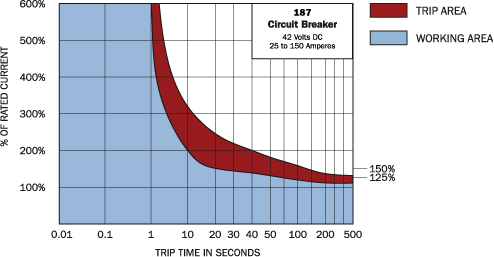 Thanks-- Interesting stuff... I won't hurt to try it.. Hopefully the copious use of snatch blocks will prevent the type of loads required to trip it.. Post up your results after you install it and test it.. I might even kick around installing one.

sovereign said:
It is rated at 200 amps, but according to their graph it will not trip at 400 amps for at least 15 seconds. Has anyone actually used one of these and found that it will not work in a winch/starter application? There is a review on Amazon stating that it works without issue in a winch application.
Click to expand...

The listing says "* Do not use as a switch where high inrush currents are expected."
According to the OJ winch review from years back winches commonly have a startup amp draw exceeding the max load draw.

The above is why I like the Cole Hersee switch.

Antichrist said:
The listing says "* Do not use as a switch where high inrush currents are expected."
According to the OJ winch review from years back winches commonly have a startup amp draw exceeding the max load draw.

The Blue Sea rep stated that the rating is the same regardless of voltage, and approximated a 400 amp draw for 10 seconds for the 200 amp 187. I may use the Cole Hersee as a switch under the hood as a winch cutoff, but I am looking for something to protect an approx. 8ft. cable run for a battery relocation that can handle the draw from the starter as well as a winch. So, I suppose I am a bit off topic...
B

I like this post, @madizell, for various reasons, mainly it makes a lot of sense. I was initially trying to load the circuit at max rating but for my winch at 9500lbs, it will consume ~482A, but the probability of the winch operating in those conditions is small, especially when using snatch blocks, which I usually try to do to if possible.

And to avoid nuisance trips, I will most likely eliminate the 187-7149 500A Bluesea circuit breaker and just have the 6006 Bluesea switch inline.


madizell said:
How much amperage your winch will draw under a given load is determinable from charts published by all the major winch manufacturers. If Warn (for example) says their winch will draw 450 amps at a given load, I would expect that it will. How much amperage is available from the alternator is not directly relevant to what the winch will consume or what the wiring has to handle because the alternator is not (directly) supplying the power that the winch is consuming.

Your battery is the primary source of power for the winch, and generally the battery is capable of providing amperage in excess of 800 amps for long enough to melt most any wiring if a dead short occurs. The battery itself can melt or catch fire if shorted. So, inserting breakers or fuses in the 150 amp range into a winch harness would defeat the usefulness of the winch, even if it would provide some degree of protection against damage or fire resulting from shorts. If a good battery can (and should) provide pulse amperage in the 1,100 amp range, what kind of a circuit interrupter would you use to protect the system?

In my opinion, the winch manufacturers tell you to wire the winch directly to the battery for a reason. The wire harness provided is the only wiring on the vehicle capable of sustaining the amperage load the winch demands under its rated range of performance. Degrading or limiting the harness rating would only degrade the performance of the winch.

Many winches will, in fact, consume 400 amps or more even when not stalled. A full stall electric motor consumes a lot of amperage, and it may well spike under those conditions to amperages well above those shown for the same motor under a running load. Having never had a load meter on a stalled winch, I don't know what the amperage consumption could spike to, but I would assume it would be well above the maximum draw shown for the winch under load. Still, I have stalled my winch many times without damage, and without causing a fire, so whatever the draw was, the system was able to provide it and sustain it at least briefly without negative result.

Most of the time when using a winch for recovery, you will not pull maximum loads and thus will not pull maximum amperage. We routinely use only 2,000 to 4,000 pounds of pull for recovery, even with rigs far heavier than that and with winches rated for 8,000 to 12,000 pounds of pull. Check the power consumption chart for your winch. Instead of focusing on the maximum ratings and loads, look at the consumption for a 2,000 pound pull on the first wrap or second wrap and you will find that the power consumed is far less than maximum, and probably within the range of a heavy duty alternator. If this was all the winch ever was asked to do, a 200A breaker would probably do fine in circuit.

However, the power harness for the winch should be built to handle the maximum load anticipated, not the nominal load or average demands of recovery. You simply can not control the amount of power needed by your winch when recovering a vehicle, so you need to build for maximum effort.

I would not recommend using a circuit breaker or fuse in a winch harness for the simple reason that it is both possible and likely that you will see momentary power consumption far above the rating of any such device if the breaker rating is lower than the winch demands. I don't see a point in this, because you will be resetting breakers or replacing fuses when it really is not required otherwise.

Having used winches on vehicles in extreme circumstances now for a lot of years, I can say from experience that I have never seen a short in a winch harness. I have even used mine repeatedly while the winch was fully submerged, without issues or shorting. If the harness is correctly routed, not subjected to abuse or excesses of heat and abrasion, or neglected, the likelihood of a short is so far down the probability scale as to be not worth taking extraordinary steps such as installing circuit interrupters.

My recommendation is to install the winch according to manufacturer's directions and let it go at that.
Click to expand...

I use one of these with my Warn winch